On April 20, one of the world's biggest oil benchmarks traded in negative territory. It wasn't just a quirk, but a symptom of a much bigger problem.

On April 20, people who watch the oil and gas industry closely experienced something that felt like it was out of a work of fiction. West Texas Intermediate crude prices went negative, as traders rushed to unload contracts for May deliveries that will arrive when the Cushing, Oklahoma hub is expected to be completely full.

On one hand, yesterday's negative oil prices were a worst-case combination of cratering demand, and production being much slower to fall in line.

On the other hand, this isn't just an oddity in the way commodities are traded, but a massive warning signal of structural problems in the oil industry. 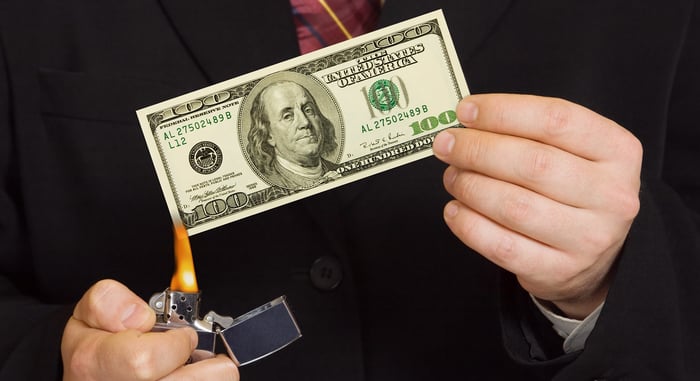 Negative oil prices weren't a quirk, but a warning shot

Here's a short explanation of what happened on April 20. If you trade oil, you own oil futures, and those futures actually mean you're on the hook to take physical delivery of the oil. On April 20, many traders were facing having to take possession of oil at the Cushing, Oklahoma, oil hub in May -- when that facility is expected to be completely full. As a result, traders spent much of the afternoon doing almost anything they could to unload those contracts...including paying others to take them. That's when things went negative.

Individual investors flooding capital into the United States Oil Fund (USO 2.90%) may have played a big part in yesterday's crash. Bloomberg reported that perhaps 25% of outstanding May 2020 futures were held by that fund yesterday. This is what happens when investors who can't actually take the oil get caught in a massive imbalance between supply and demand.

The underlying reason is the massive crash in demand for oil. Over the past four weeks, U.S. gasoline shipments have fallen more than 30%, while jet-fuel shipments are down 40%, according to the U.S. Energy Information Administration.

Yet the world will have spent the month of April pumping even more oil than in any other month in history. Many U.S. producers have cut their output over the past few weeks, but Russia, Saudi Arabia, and others have spent April pumping even more oil than they were earlier in the year. The recent historic deal to take 10 million barrels per day off the market won't kick in until May 1, and the levels the cuts were set at are based on production under a prior deal that expired on April 1.

The stark reality is finally starting to set in. West Texas futures contracts are below $30 per barrel all the way to April, well below the price that most U.S. oil producers need to just cover their production costs. Even Brent, widely considered the most important global crude-oil benchmark, is trading for less than $35 per barrel all the way into October deliveries.

Yes, low oil prices are brutal, and are causing massive problems for the entire oil value chain right now. The negative prices we saw were a bit quirky, and it was mostly traders who got hit, not oil producers.

But the underlying reason this happened is a huge warning signal that much of the oil industry is uninvestable right now -- outside a handful of the largest and best-capitalized companies, like supermajor Royal Dutch Shell (RDS.B) (RDS.A), and integrated midstream and upstream giant Phillips 66 (PSX -0.23%). These two companies have billions in cash on their balance sheets and well-structured debt they can support, and significant exposure to natural gas that will help offset the collapse in prices and demand for oil and refined products.

Yet while these top oil stocks will be able to survive the next year just fine, it could take longer than that for the industry to recover. Even when economic activity picks up and oil demand rises, the world will be awash in hundreds of millions of barrels of oil, which will need to be worked through before oil production can start to recover.