Please ensure Javascript is enabled for purposes of website accessibility
Log In Help Join The Motley Fool
Free Article Join Over 1 Million Premium Members And Get More In-Depth Stock Guidance and Research
By Leo Sun – Apr 21, 2020 at 10:05AM

Disney Sorcerer’s Arena could cast a spell of protection on the mobile game maker’s stock.

Analysts at KeyBanc and SunTrust, which both have the same $8 price target as Cowen, offered similar bullish arguments. The eleven analysts who cover Glu remain overwhelmingly bullish on the stock, with buy- or hold-equivalent ratings. Investors should always take Wall Street's estimates with a grain of salt, but they should still see if this newly licensed Disney game can buoy Glu's stock as COVID-19 headwinds batter the broader markets.

Glu rose to prominence with the success of Kim Kardashian: Hollywood six years ago. However, it subsequently grew too dependent on licensed games, which throttled its earnings growth with high royalties.

To diversify away from licensed games, Glu developed new original franchises like Design Home, Covet Fashion, and Tap Sports Baseball, all part of its "growth" games category, which generated 79% of its bookings in 2019. 14% came from its older "catalog" games, including Kim Kardashian: Hollywood, and the remaining 7% came from new games.

73% of Glu's bookings came from original IPs last quarter, up from 70% a year earlier. The growth of those titles counters the bearish argument that Glu is a "one-trick pony" that is overly dependent on licensed games.

However, Glu still lost users over the past year. Last quarter its monthly active users fell 26% annually to 15.6 million as its daily active users dipped 9% to 2.9 million. Despite its loss of users, Glu's total bookings still rose 10% annually to $108.4 million, its in-app billable transactions grew 35% to 16.7 million, and its revenue grew 18% to $112.9 million. In other words, Glu is squeezing more revenue from its dedicated gamers to offset its ongoing loss of active users. 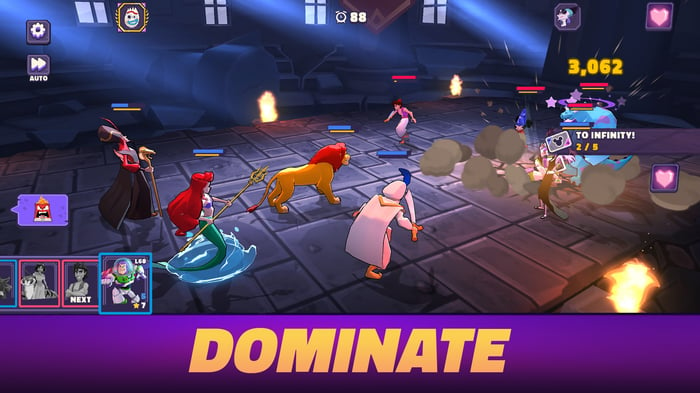 In early February, Glu highlighted Sorcerer's Arena and Tap Sports Baseball 2020 as its near-term catalysts for the first quarter. It expects Originals, an interactive story game, to drive its growth in the middle of the year, followed by the launch of Deer Hunter Next in the second half of the year.

What does Glu expect from Disney Sorcerer's Arena?

During last quarter's conference call, CFO and COO Eric Ludwig declared that Disney's Sorcerer's Arena and Deer Hunter Next "could over time become scale growth games, which contribute meaningfully to our long-term margins." Ludwig noted that Glu's new games would likely rack up adjusted EBITDA losses in the first half of the year before becoming profitable in the second half of the year, resulting in break-even profits for 2020.

In short, Glu expects Disney's high licensing fees and its own operating costs to dent Sorcerer Arena's margins before it can monetize more gamers to offset those losses. Glu also notably excluded Sorcerer's Arena from its first-quarter guidance, which calls for roughly 1.5% annual bookings growth, but declared it would provide a clearer bookings forecast for the game during its earnings call in May.

Those comments don't offer much insight into Sorcerer Arena's growth potential. Disney-licensed games also rarely cracked App Annie's top rankings in the past, and it's unclear if Sorcerer Arena can break that streak of mediocre returns. But if Sorcerer's Arena makes a splash, it could significantly boost Glu's bookings throughout the rest of the year.

Will Disney Sorcerer's Arena move the needle for Glu?

The launch of Disney Sorcerer's Arena is a risky move for Glu since it increases its dependence on licensed titles and shoulders it with high royalties again. But if Disney Sorcerer's Arena is a hit, its monthly and daily active users could grow again. Glu's business is naturally insulated from the COVID-19 headwinds, and it hasn't altered its guidance in light of the pandemic.

With Sorcerer's Arena, Glu is sacrificing its near-term margins to gain users and widen its moat in the competitive mobile gaming market -- so investors should see if that gamble pays off over the next few quarters.