The brokerage will again hand out $0.18 per share on its common stock, which at current trading levels yields about 2%.

Despite the SARS-CoV-2 pandemic and the looming absorption of a big former rival, financial services giant Charles Schwab (NYSE: SCHW) is keeping its quarterly dividend steady, at least for now.

On Wednesday after the market closed, the brokerage declared that the next dividend on its common stock will be $0.18 per share. It will be distributed on May 22 to investors of record as of May 8. That amount matches the previous dividend, which was disbursed at the end of February. Prior to that, Schwab had paid $0.17 per share. At the company's current share price, its yield is slightly over 2%. 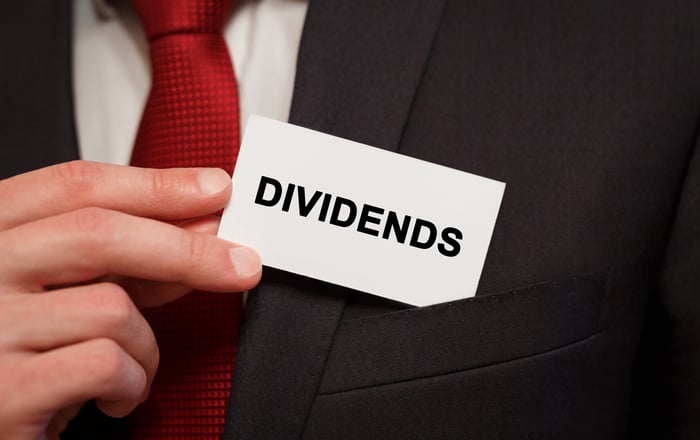 The company also declared dividends on its Series C, D, and F preferred stock classes, none of which is widely held. Those payouts were $15.00, $14.88, and $2,500.00 per share, respectively. As with the common stock, all three amounts are the same as the previous distributions.

News of the steady payouts came just over a week after Schwab unveiled its first-quarter results. The company's net revenue and net income both fell on a year-over-year basis, and missed estimates. Those misses weren't very wide, though, and the company is still quite profitable and attracting clients -- during the quarter, its core net new assets rose by 42%, and the number of active brokerage accounts increased 8%.

Schwab hasn't lately issued an update about its $25 billion acquisition of fellow brokerage TDAmeritrade. However, the latter company wrote in its recent fiscal Q2 earnings report that the deal -- originally announced in November -- was on pace to be completed in the second half of 2020.

Schwab essentially traded flat on Wednesday, against the gains of the wider equities market.