Please ensure Javascript is enabled for purposes of website accessibility
Log In Help Join The Motley Fool
Free Article Join Over 1 Million Premium Members And Get More In-Depth Stock Guidance and Research
By Dan Caplinger – Apr 23, 2020 at 10:25AM

With this complicated exchange-traded product in flux, it's hard to get a handle on how it will behave.

The financial markets have seen a lot of volatility lately, and stock market investors have had to deal with the first bear market in more than a decade. Yet that pales in comparison to what energy investors have dealt with, including negative prices on crude oil futures and a complete collapse in demand amid massive oversupply problems.

Many investors believe that oil's low prices won't last, and they want to bet on a rebound. One investment that seemed tailor-made to play a bounce in oil prices was United States Oil Fund (USO 1.93%). However, the volatile conditions have forced U.S. Oil Fund to change the way it invests twice in the last week alone. As a result, it's unclear whether the fund will really be able to deliver on its hope to track the price of spot crude oil through the use of futures contracts. 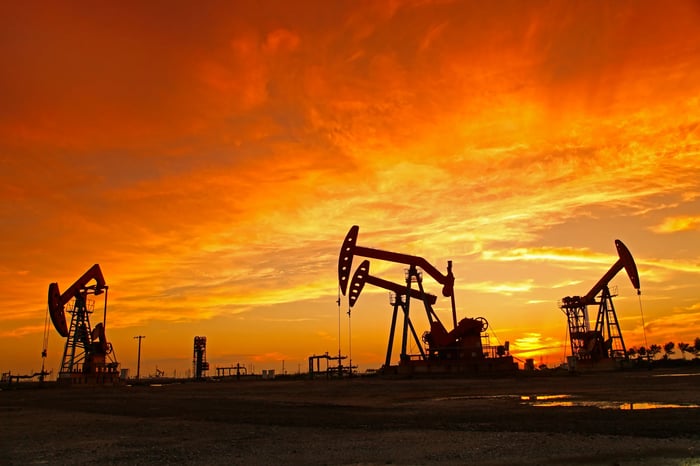 The aim of the United States Oil Fund is simple: track daily spot price moves in West Texas intermediate light sweet crude oil. However, the fund doesn't want to bear the cost of holding and storing crude oil, so it instead invests in oil futures contracts.

Until recently, the method that U.S. Oil Fund used with its investing was straightforward. The fund held futures contracts set to expire in the nearest month, and during a range of dates before those contracts expired, it rolled them forward to the next month. Most of the time, futures prices and spot prices behaved similarly over short periods of time, and so the fund was able to achieve its short-term objective.

Why U.S. Oil Fund has changed its strategy -- twice

Unprecedented volatility in oil futures contracts wiped out many energy investors earlier this week, but U.S. Oil Fund survived. As near-month futures went negative, the fund benefited from having already rolled its contracts forward to the subsequent month. It had also changed its investing guidelines to divert 20% of its assets into futures contracts two months into the future, as it was in danger of violating futures exchange rules limiting the number of contracts any one entity can have.

On Wednesday, U.S. Oil Fund made an even bigger investment shift. The fund disclosed in a U.S. Securities and Exchange Commission filing that it now had 20% of its assets in June oil futures, 50% in July futures, 20% in August futures, and 10% in September futures.

More importantly, the fund said that it would no longer necessarily disclose in advance exactly how it positions its portfolio, leaving open the possibility of investing in whatever futures contracts it wants. The fund committed to continuing to disclose positions as of the end of the previous business day, but it argued that current conditions in the markets make it prudent to retain flexibility in its approach. Indeed, by the close, those percentages had shifted again, with holdings indicating no September futures and a roughly 40%/55%/5% split across June, July, and August futures.

Even U.S. Oil Fund fears that it's unreliable

Worst of all for energy investors, United States Oil Fund no longer has complete confidence that it can deliver on its promise to investors. In its words from the SEC filing, "USO intends to attempt to continue tracking USO's benchmark as closely as possible; however, significant tracking deviations may occur above and beyond the difficulties described herein."

Another aspect of U.S. Oil Fund's recent moves is also hurting investors. The fund manager decided to suspend allowing institutional investors to create new ETF shares, artificially limiting the number of shares available. As a result of demand for what shares are still outstanding, the fund's price closed at a nearly 9% premium to its actual value on Wednesday afternoon. The possibility of much more extreme premiums will create even more danger for investors using the fund to bet on oil prices.