Even the fund's own futures merchants are posing risks.

The energy market has been even more volatile than the stock market over the past several months, with crude oil prices seeing massive swings and even briefly going negative. Coronavirus-related disruptions and geopolitical wrangling between major oil-producing countries has put together perfect conditions for choppy markets. While many energy stocks have gotten crushed in the downdraft for crude, some investors have seen the declines as an opportunity -- and have turned to United States Oil Fund (USO 4.00%) to try to profit from a possible rebound.

Unfortunately, the difficult trading environment has forced U.S. Oil Fund to change the way it tries to meet its investment objective. Even with those changes, though, USO is having trouble with its main partner in executing actual trades in the futures markets -- and it recently identified yet another risk factor that could bring about investors' biggest fear: that they won't participate in any future oil price recovery.

On its face, USO's objective seems incredibly simple: to give investors a return equal to the return from owning spot-market West Texas intermediate crude. However, the fund doesn't want to incur the expense and hassle of actually owning and storing physical crude oil, as that would eat into its returns. To avoid that, USO instead invests in oil futures contracts. 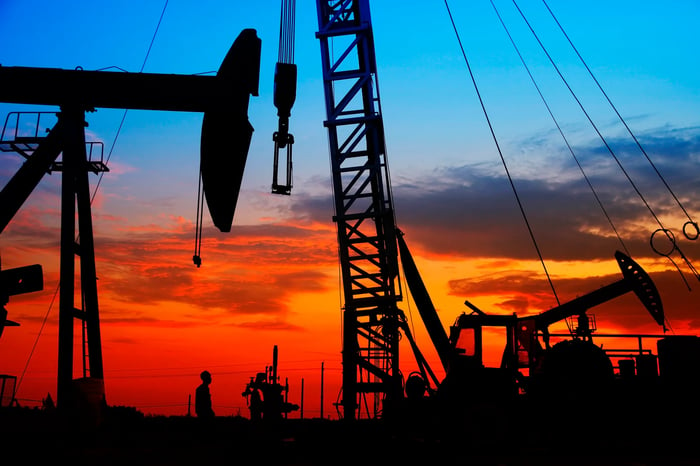 Futures don't require USO to take delivery of crude oil, but they present other issues. Each month, the fund typically rolls forward its oil futures to the next month before they expire. Depending on market conditions, that can eat into U.S. Oil Fund's returns. Specifically, if the next month contract price is higher than the current month price -- as is often the case -- then the fund won't see a positive return even though the spot price effectively moves higher over time.

Those problems became severe in the last several months. Market volatility forced the fund to switch its futures strategy, moving beyond the near-month futures contract and replacing it with exposure to a broader array of contracts extending as much as a year into the future. Even though that creates the risk of heightened tracking error, investors have still flocked to USO, replenishing its total assets with new share purchases even in the face of a reverse split and the fund's terrible returns so far in 2020.

Fighting against its own broker

However, in the process of registering new shares with the U.S. Securities and Exchange Commission, USO revealed yet another obstacle. RBC Capital Markets is USO's sole futures commission merchant, and it has taken steps to manage its own risk that could prevent USO from following even its amended investment strategy.

Specifically, RBC has done the following, according to USO's prospectus:

USO warned investors that it doesn't know how long RBC will keep the limitations in place, and while it's looking for other futures merchants, it can't guarantee it will find one to execute trades.

As a result of these limitations, USO said that in the future, it may not be able to purchase benchmark oil futures contracts. That would force it to invest in "other permitted investments," which includes not only what USO calls "other oil-related interests" but also non-oil investments like Treasury securities and cash equivalents. That in turn could further hamper the fund in trying to match the return of spot crude.

U.S. Oil Fund is too unpredictable

If the point of buying USO is to track the price of crude, these new risks just add to the challenges investors have already faced recently. Investors can't count on seeing their investment in USO rise at all on days when oil prices go up, let alone expecting a similar percentage move in their fund shares. That's the biggest fear that most USO investors have: that oil will rise but they won't profit from it.

It's bad enough when a fund admits its lack of confidence in meeting its objectives. When a fund is fighting with its own service providers, it's a sign that there's more risk involved than most investors appreciate. Oil investors  simply must be fully aware of that risk if they're going to stick with USO in their portfolios.

With Oil Prices Up 259% in the Last Month, Is USO Stock a Buy or Sell Right Now?