Please ensure Javascript is enabled for purposes of website accessibility
Log In Help Join The Motley Fool
Free Article Join Over 1 Million Premium Members And Get More In-Depth Stock Guidance and Research
By Matthew DiLallo - May 20, 2020 at 7:04AM

Crude oil prices have been incredibly volatile this year. WTI, the main U.S. oil price benchmark, started 2020 right around $60 a barrel. However, dual shockwaves from the collapse of Russia's oil support agreement with OPEC and the COVID-19 outbreak caused crude to crash. At one point, the May expiration for WTI oil futures contracts cratered to a negative $40.32 per barrel. WTI has since gone on an epic run, rallying over 250% in the past month to its recent level of around $32 a barrel.

One way many oil market speculators have played oil's wild ride is through the United States Oil Fund (USO -1.70%). While that oil ETF has rallied along with crude prices over the past couple of weeks, it hasn't done a good job matching the daily price movements of WTI. Because of that, oil traders face the dilemma of whether USO stock is the right way to play the rebound in the oil market. 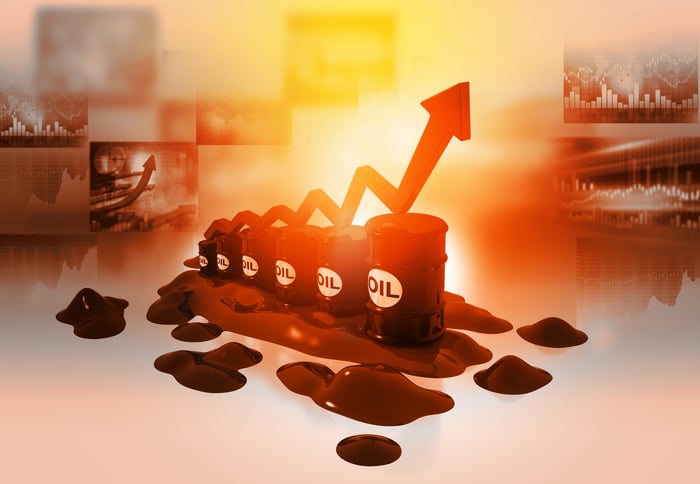 The stated objective of the U.S. Oil Fund is to track the daily price movements of WTI. However, instead of holding physical oil, this ETF trades in oil futures contracts. Historically, it primarily bought those with the nearest expiration. However, given all the volatility in the oil market this year, the fund adjusted its investment strategy.

One of the issues with its game plan is that it often needs to pay a higher price to roll contracts into new ones before expiration. That price can be quite steep when oil futures are in contango, meaning the contract value in future months is higher than those expiring in the near term. This constant rolling has eaten into USO's returns over the long term. For example, from January of 2016 through the end of last year, WTI rallied 60%. However, USO stock only gained 16.5%, because of the impact of rolling and the fees it charges investors to manage the fund.

This underperformance has only gotten worse this year because of all the volatility in the oil market. Due to tracking issues, USO shares lost about 30% of their value over the past month, even though crude oil has gone on an epic run. Furthermore, because of the tracking problem, USO stock didn't hit bottom until April 28, a full week after WTI. Even from that later bottom, USO has only rebounded by about 40%, while WTI has zoomed 158% during that time frame.

Plenty of room to run?

USO's tracking issues aside, traders buy this oil ETF to profit from a rally in the oil market. If timed right, it can deliver on that objective even if it doesn't match oil's run perfectly. Thus, traders who hold the view that WTI still has ample upside ahead are likely contemplating buying USO to try to profit from that thesis.

On the one hand, it's not a stretch to think that oil could have further to run. OPEC and its partners just started shutting in some of their oil output as part of a historic supply reduction agreement that lasts until 2022. Meanwhile, many U.S. producers are also shutting in production to combat lower prices. At the same time, demand has started rebounding as governments lift travel restrictions and allow nonessential businesses to reopen. China's oil demand has already bounced back to where it was before the COVID-19 outbreak. With supplies coming down and consumption beginning to rev back up, crude oil prices could continue rising over the coming months. This thesis suggests that an investor could make some money buying USO.

However, there's also the risk that crude prices could take a long breather or, worse yet, sell off in the near term. Several potential factors could cause a wave of selling in the oil market. For example, a second spike in COVID-19 cases could cause governments to reimpose travel restrictions. Meanwhile, oil companies might soon turn their pumps back on and resume their drilling activities, which would unleash a gusher of new oil that could weigh on prices. Add that to USO's underperformance issues, and speculators could quickly lose money on their oil bets if crude doesn't cooperate.

Get out or stay out

If you were lucky enough to time a USO gamble perfectly so that it's profitable, you might want to consider selling before that gain evaporates, via USO's tracking issues or a sell-off in the oil market. Meanwhile, if you're considering buying USO on the belief that oil could continue rallying, you might want to rethink that. A better option would be to consider investing in a high-quality oil stock instead of this highly flawed trading vehicle.