An implosion in the oil market has several producers starting to turn off their pumps as storage facilities fill to the brim.

Crude oil prices have crashed and burned this year. At one point this week, the U.S. oil price benchmark, West Texas Intermediate (WTI), plummeted into negative territory as price speculators raced to unload positions before they had to take delivery of physical oil they couldn't store because the country is running out of space. The industry's oversupply issue is forcing producers to take extreme measures.

One step a growing number of U.S. producers are taking is shutting down some of their oil pumps. Because storage space is at a premium, it's less of a financial burden to keep oil underground than to pump it into the country's oversaturated market. 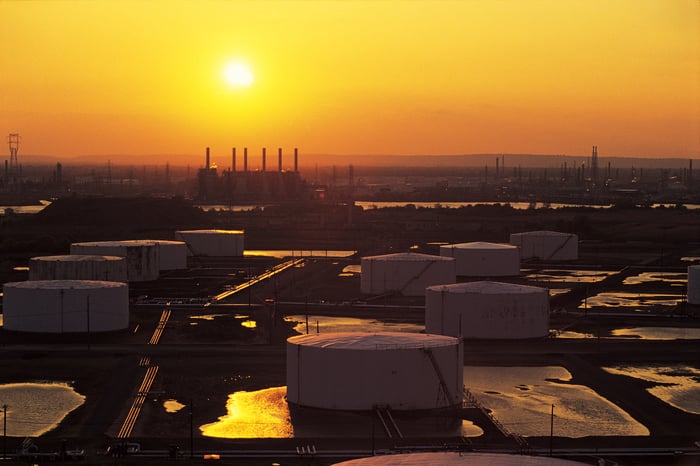 Shutting it all down

Continental Resources (CLR -2.13%) was one of the first producers to feel the pinch of the country's overburdened infrastructure. Earlier this month, the company announced a 30% production cut for April and May after some of its customers told Continental they couldn't take as much oil. One of those buyers, refiner CVR Energy (CVI -5.24%), for example, asked Continental to reduce the crude it supplies that company's refinery in Oklahoma by 25%.

Industry conditions, unfortunately, have gone from bad to worse over the past few weeks. Continental, in response, will shut in most of its wells in North Dakota's Bakken shale, according to a report from Reuters. The company was producing about 150,000 barrels per day (BPD) in the state at the beginning of the year. It was selling for roughly $3 a barrel this week, which is less than WTI's recent price of around $16.50 a barrel. Unlike most peers, Continental had no protection against plunging oil prices because it didn't secure hedging contracts to cushion against a potential decline.

Taking a little bit off the top

Several other producers are shutting in oil wells because of low prices and the lack of storage capacity. One of the biggest reductions is coming from ConocoPhillips (COP -3.95%). The oil giant plans to curtail about 125,000 BPD of its U.S. output starting in May. That's on top of the 100,000 BPD of production in Canada it's shutting in this month. ConocoPhillips could reduce its volumes even further depending on oil prices and whether regulators in places like Canada or Texas mandate supply curtailments to ease the industry's storage constraints.

Several drillers in Texas have already voluntarily reduced their output. Parsley Energy (PE), which led a joint effort to push the state to mandate a 20% reduction, shut in 400 lower-producing wells. Concho Resources (CXO) has also shut in several unprofitable wells in response to crashing oil prices. More drillers will probably have no choice but to turn off pumps in the coming weeks as storage tanks fill up.

At the industry's current production pace, U.S. oil storage capacity will run out by mid-May, according to an estimate from oil pipeline giant Plains All American Pipeline (PAA -1.29%), which asked its producing customers to start shutting in some wells.

Meanwhile, other pipeline companies are looking for creative solutions to store excess oil. Energy Transfer (ET -1.55%) is evaluating a plan to keep crude in some idle pipelines in Texas. The company believes it could potentially store 2 million barrels of oil by mid-May in two of its existing systems.

Enterprise Products Partners (EPD -0.85%), on the other hand, is converting some of its natural gas liquids storage caverns to hold finished refined products like gasoline and diesel. By increasing storage options for refined products, refineries could process more oil.

Oil demand has plummeted this year because of the COVID-19 outbreak's impact on the economy. That has put intense pressure on crude oil prices because the county is running out of room to store this excess oil. It's leaving producers with no choice but to shut in wells that are no longer profitable to operate.

More companies will need to join them in the coming weeks as storage terminals fill to the brim. While pipeline companies are trying to find additional capacity, the industry needs to slow production until the economy has started recovering and can burn off some of the excess supply. If they don't, then it will take the industry a lot longer to recover, which could result in an even bigger wave of bankruptcies in the coming months.