As officials emphasize the need for testing before reopening the company, the question of adequate supplies remains a pressing issue.

Pivoting from the production of personal protective equipment, Stratasys (SSYS -0.32%) announced today that it's focusing on another critical aspect of the COVID-19 outbreak: testing. To help alleviate supply shortages, Stratasys announced that it is partnering with Origin, which is also focused on additive manufacturing, to help deliver nasopharyngeal (NP) swabs to healthcare workers and medical centers across the United States. According to the agreement, Stratasys will market and promote Origin's 3D-printed NP swabs as Origin strives to ramp up production of the swabs to 1.3 million per week.

Eager to meet the demand for NP swabs, Christopher Prucha, CEO of Origin, said that his company has "been impressed by the speed with which Stratasys has been able to provide thousands of shields to healthcare systems across the country and believe they are the right partner for helping get millions of swabs where they are most needed." 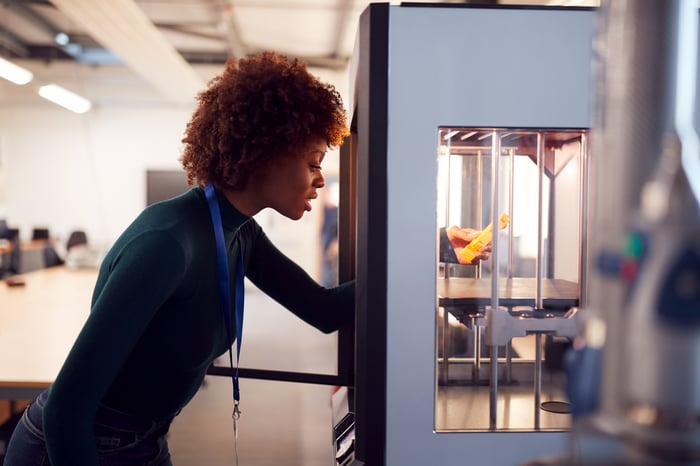 Earlier this month, Stratasys helped to organize a coalition of more than 150 companies and universities to help produce disposable face shields for healthcare workers. In total, the coalition has supply agreements for more than 14,000 face shields per week; however, the company recognizes the need to increase production in order to meet demand of more than 40,000 per week.

Based on a clinical with Beth Israel Deaconess Medical Center, a medical center affiliated with Harvard Medical School, Origin's NP swabs were found to have performed extremely well compared to control swabs and two other 3D printed swabs.