The company announced its 2Q 2020 earnings release date and, more important, provided an update on its business.

Shares of Valvoline (VVV -1.02%) were up as much as 10% at noon today. Earlier Thursday, the lubricant maker and auto service provider announced the timing of its fiscal second-quarter earnings release. Although that would normally be a nonevent, this time around, the news release also included an update on what was happening around COVID-19. Investors were broadly pleased with the news.

Although Valvoline falls into the energy sector, it is actually an odd mix of businesses. Roughly two-thirds of its revenue is tied to the production of motor vehicle oils, with the rest produced by its quick-lube oil service, which includes company-owned and franchise locations. The oil-change locations provide around 45% of adjusted EBITDA. Obviously, producing motor oils falls nicely into the energy industry. The oil-change operations, which contribute disproportionately to EBITDA, are really more of a service business. 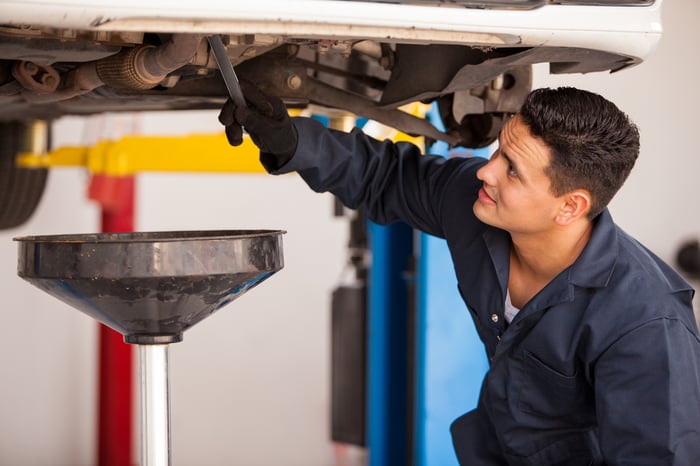 So 2020 has been a tough year all around for Valvoline. Efforts to contain COVID-19 have largely revolved around social distancing, which has effectively shut economies around the world for an extended period. That's led to less driving and thus less need for motor oil. At the same time, social distancing has not only reduced the need for oil changes, but it has also complicated the normal delivery of those services.

Thus, the update on COVID-19 when the company also announced the date of its next earnings release (May 7). This was actually the second such update, but the first basically said that the company was making changes to its operations to deal with COVID-19. The only material financial information in the earlier release was that Valvoline drew down $450 million from a credit facility and $75 million on a trade receivables securitization facility. Both were aimed at bolstering its liquidity position.

The current update contained a lot more information. For starters, the company believes it has ample liquidity to deal with COVID-19 headwinds. Management noted that it hadn't used any of the cash from the credit facilities it tapped earlier in the quarter. It was even able to expand the size of its trade receivables securitization facility by $50 million, suggesting that its lenders are still highly supportive. That said, the bigger update was on the revenue side, where overall sales were down just 2% in the quarter with volumes off by about 6%. That's not bad given the market environment. Earnings are projected to be $0.33 per share.

Far more enlightening was the breakdown given between the first two months of the year, where sales were up 2% and volumes off by 5% year over year, and the month of March, in which sales fell 10% and volumes were off by 9%. Essentially that provided investors with a pre-shutdown and post-shutdown view of the business.

With most of its facilities and oil-change locations still operating (they are considered necessary businesses), the hit to sales appears to have been less severe than investors had expected. Thus, the stock popped on the news. For a company with a material service operation, a sales decline of only 10% in the face of COVID-19 does seem like a pretty good outcome. Adding to the positives here is the fact that its oil-change locations are a captive distribution network for the company's motor oils, further supporting the prospects of the overall business.

Shares of Valvoline are down around a third from their highs earlier this year. But they are also materially higher than they were just a month or so ago. This current update adds important color to the outlook for quarterly earnings, but more importantly to the overall impact to expect from COVID-19. At this point, investors should be taking a deeper look at Valvoline before lumping it in with other energy companies. It clearly has a very different business profile.