Please ensure Javascript is enabled for purposes of website accessibility
Log In Help Join The Motley Fool
Free Article Join Over 1 Million Premium Members And Get More In-Depth Stock Guidance and Research
By David Haen - Updated Apr 24, 2020 at 7:33AM

Outcomes from clinical trial results can propel a biotech's stock price positively or negatively, regardless of the size of the company. Currently, biotech investors are eagerly awaiting data from AnaptysBio (ANAB -2.60%), which has a $435 million market cap, on a drug that recently fell short in a clinical trial for a different disease. Meanwhile, $8 billion Exelixis (EXEL 0.00%) just announced positive pivotal trial results, sending its shares higher. Does that mean Exelixis stock is fully valued? Which is the better buy today? Let's dig in. 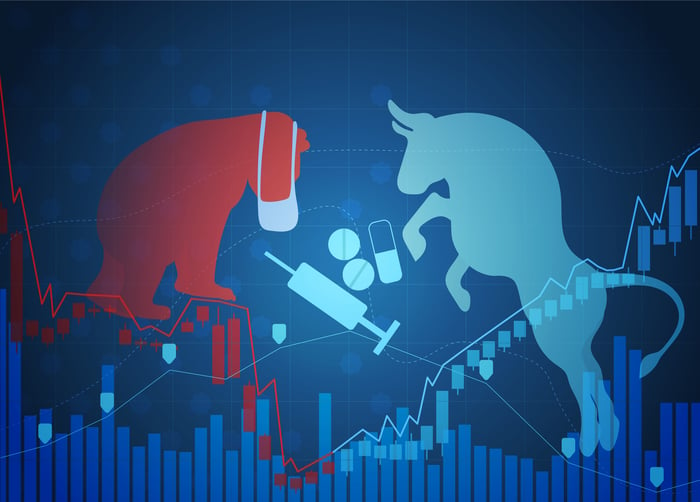 On Monday, Exelixis' stock jumped by more than 20%, adding roughly $1.5 billion in value to the company. The cause? Exelixis and Bristol Myers Squibb (BMY 1.29%) unveiled new clinical trial results that could become the standard treatment for patients with previously untreated advanced renal cell carcinoma (RCC, a form of kidney cancer).

The American Cancer Society estimates that 74,000 people will be diagnosed with kidney cancer in the U.S. this year, with 85% of those cases being RCC. Pharma companies and biotechs have been battling to develop better drugs or combinations to treat this condition, one of the top 10 most prevalent cancers in the United States.

The stakes were high for Exelixis. Its lead drug, Cabometyx, had been approved for two indications of RCC, including its use as the preferred single agent therapy by the National Comprehensive Cancer Network. However, combination treatments with immunotherapy agents recently demonstrated the most efficacious options, taking a bite from Cabometyx's potential sales.

A phase 3 trial called the Checkmate 9ER study examined Cabometyx in combination with Bristol Myers Squibb's Opdivo, a blockbuster immunotherapy drug approved for numerous other types of cancer. Results from the trial showed that the combination achieved its primary and secondary endpoints, increasing progression-free survival and overall survival in advanced kidney cancer patients. Detailed results will be presented at a major medical conference in the future, which is standard practice.

While the stock jumped in reaction, the companies still need to file for approval from the FDA and other regulatory agencies. The odds of approval appear to be pretty good, as both drugs are already approved for multiple indications and a large amount of supporting safety data exists.

AnaptysBio expects to announce results this quarter from a 100-patient phase 2 trial of its drug etokimab in patients with chronic rhinosinusitis with polyps. These are people suffering from swelling, inflammation, and pain for more than three consecutive months caused by growths or polyps in the sinuses.

The stakes are high for the outcome of this trial. Etokimab failed at the end of 2019 in a mid-stage clinical trial for mild to moderate atopic dermatitis (eczema). The company ended any further work in eczema and put another trial on hold pending the results in chronic rhinosinusitis.

Class-action lawyers sued the company in the wake of the trial failure, claiming investors were misled about the atopic dermatitis trial and another trial aimed at peanut allergies. Unfortunately, these lawsuits have become common after clinical trial failures. Companies carry insurance for this, and the lawyers know it. The insurance companies almost always force a settlement before going to court because it’s cheaper than paying legal fees. Don't fret. Unless the company purposefully misled investors, the lawsuits should not have a dramatic effect.

Both of these cash-rich companies can financially endure clinical setbacks or delays due to COVID-19. Biotech investors will be keen to see if AnaptysBio's etokimab is dead in the water or if the upcoming results breathe new life into the program. Exelixis, on the back of its clinical success, will likely see an uptick in future revenue for Cabometyx.

AnaptysBio's stock traded for more than twice its current price prior to etokimab's trial failure for eczema. A positive trial outcome for rhinositis could potentially double the stock price again, as many have written off the drug completely. Because it carries greater risk, AnaptysBio is a more appropriate choice for risk-tolerant investors with longer time horizons.

As for Exelixis, I (like many others) believe it to be an attractive acquisition candidate. The recent results eliminate risk to the buyer and increase the potential buyout price. On a standalone basis, I think the stock could appreciate another 20% into the $30 price range in the coming year. In the end, my vote goes to Exelixis.