Please ensure Javascript is enabled for purposes of website accessibility
Log In Help Join The Motley Fool
Free Article Join Over 1 Million Premium Members And Get More In-Depth Stock Guidance and Research
By Zhiyuan Sun – Apr 24, 2020 at 5:30AM

Certain patents covering a biotech giant's multi-billion dollar biologic are set to expire starting this year. Does this mean an end for its stellar growth?

Year to date, shares of Regeneron Pharmaceuticals (REGN 1.32%) have gained nearly 50% despite significant declines in the overall market. Arguably, strong growth from its core pipeline consisting of Eylea (eye injection used to treat various forms of retinal disorders) and Dupixent (biological therapy used to treat allergies) have been fueling the rally. In addition, the company possesses a major catalyst in the form of a potential novel treatment for COVID-19, which will release topline results by the end of April.

Meanwhile, a small detail tucked away in the company's annual report may signal significant problems ahead. Starting this year, patents covering Eylea will begin to expire, putting nearly $5 billion worth of revenues at risk from biosimilar competition. Will the company be able to continue its growth streak going forward? Let's find out below. 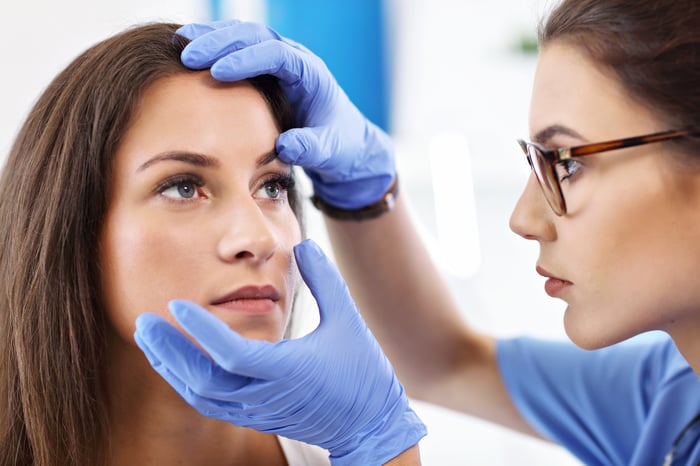 A story of Eylea

Eylea is an eye injection consisting of signal proteins that stimulate the formation of blood vessels and is used to treat four conditions in the eye relating to constricted blood flow. Since its launch in 2015, the biologic has been used to treat more than 790,000 eyes and generated over $7 billion in revenue for Regeneron and its collaborative partners in 2019. It is currently Regeneron's best selling product, accounting for over three-quarters of its revenues.

The saying "The higher the climb, the harder the fall" is usually true for companies heavily dependent on one product for its cash-flow. Starting from 2020, the biologic's composition of matter and methods of treatment patents will begin expiring in certain countries in the E.U. This will allow generic pharmaceutical companies to make multiple copycat versions of Eylea and dramatically reduce its pricing, and by proxy, its sales.

What the competitors are doing

First-in-line to capture Eylea's market share is actually that of a branded competitor. Novartis' (NVS -1.47%) Beovu eye injection was approved last October for the treatment of wet age-related macular degeneration, one of the four indications Eylea is used for. While the biologic was able to match Eylea in terms of improving visual acuity and maintain it for up to two years, it does have serious pitfalls.

For a start, Beovu is four times as likely as Eylea to cause intraocular inflammation as discovered in its clinical trials. More importantly, the biologic was discovered post commercialization to have caused 11 cases of vision loss, in patients given as little as one or two injections.

In context, however, its prevalence may be small from a risk-reward standpoint. In March, Novartis announced an update claiming 57,000 vials of Beovu have been shipped to prescribing physicians in the U.S. since launch. At the minimum, the drug is likely to serve as a rookie competitor and the biosimilars will be responsible for Eylea's decline.

So far, Momenta Pharmaceuticals (MNTA) and Mylan (MYL) are developing M710 as a biosimilar to compete with Eylea for treating diabetic macular degeneration. The two partners are currently targeting their regulatory submission by 2021. If approved, the biologic could enter the market in Europe as early as next year.

So is the company safe?

Luckily, investors can breathe a sigh of relief because the vast majority of Regeneron's revenue is from the U.S., where it's protected by its patents until the mid-2020s. Meanwhile, the company is diversifying as sales of Dupixent grew from $776.3 million in 2018 to well over $1.87 billion in 2019. This biologic now accounts for nearly one-quarter of all of Regeneron's sales. Until then, having just one or two sub-par branded competitors isn't too bad. I'd expect five years from now, growth in other areas of Regeneron's portfolio would have more than made up for Eylea's biosimilar launches. Until then, the biotech stock is trading at an expensive 22 times forward earnings and its price-to-sales ratio is eight, but it's well worth it for its potential to climb even further.