Facebook (META 1.70%) published a press release on Friday announcing the launch of Facebook Rooms -- a video live-chat service that will allow people to conduct calls with up to 50 people simultaneously. Calls on the service will have no time restrictions and can be accessed through either Facebook's namesake social media platform or Messenger -- and later, Instagram Direct, WhatsApp, and Portal.

Rooms may not wind up being a big revenue generator for Facebook but could generate valuable data for other projects at the company and make it harder for specialized video-conferencing companies such as Zoom Video Communications (ZM 1.35%) to continue rapidly expanding their user bases. Zoom stock fell roughly 6% in Friday's trading. 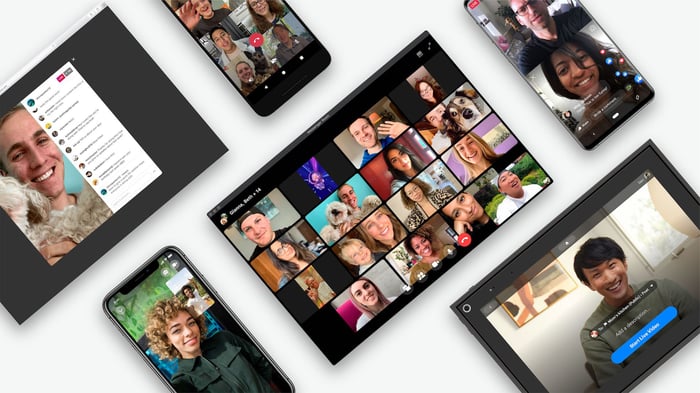 Facebook's massive global user base and wealth of resources put the company in good position to be a long-term leader in video conferencing. The video-communications space is growing quickly but also becoming increasingly crowded. While specialized providers like Zoom may continue to see strong user growth and engagement, they'll have to contend with tech titans that can tie video services to larger software and hardware ecosystems.

Facebook Rooms will use artificial intelligence (AI) to enable 360-degree panoramic backgrounds and generate lighting effects and will also have support for augmented reality (AR) filters like those popularized on Instagram and Snap's Snapchat. The company's Rooms press release notably mentions that virtual reality (VR) and augmented reality will provide more immersive platforms for visual communication in the future.

There's a good chance the social media giant will use experience and data from operating its current video-chat services to inform and support upcoming ventures in VR and AR.