Please ensure Javascript is enabled for purposes of website accessibility
Log In Help Join The Motley Fool
Free Article Join Over 1 Million Premium Members And Get More In-Depth Stock Guidance and Research
By Rick Munarriz - Apr 24, 2020 at 10:53AM

The three leading cruise lines have been pushing out their dates for travel resumption. They keep embarking up the wrong tree, and time is not on their side.

The starting line keeps moving for Carnival (CCL 4.48%) (CUK 4.10%), Royal Caribbean (RCL 3.99%), and Norwegian Cruise Line Holdings (NCLH 2.83%). Norwegian Cruise Line is announcing on Friday that it's suspending all sailings worldwide that were to have embarked through June 30. It had previously expected to start sailing again on May 15. On Thursday it was Carnival's Cunard line announcing an extension to its canceled voyages. Some of those suspensions go all the way out to Sept. 8, encompassing the entire Alaska season of its Queen Elizabeth ship.

The slow creep of cancellations will continue. Carnival updated its cancellations on April 13. It won't sail again until at least June 27, with some itineraries pushed even further out. Royal Caribbean is now next in line. It currently expects to start cruising again with sailings embarking on June 12, but that's unlikely to stick. 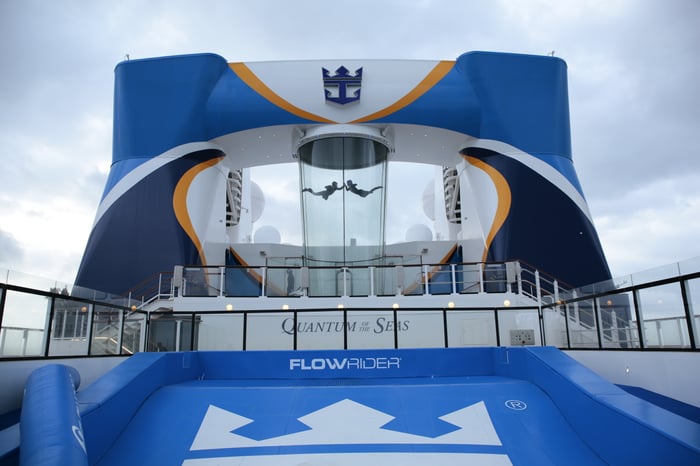 Who needs a surfing simulator when the waves are all too real for investors? Image source: Royal Caribbean.

Paying passengers aren't getting on a cruise ship anytime soon. The Centers for Disease Control extended its no-sail order for U.S. sailings earlier this month, and while that stretched the suspensions for 100 days -- unless the CDC director or the secretary of health and human services says otherwise -- it's so much easier to bet the over than the under on that timeline. It's just not safe to travel, and cruise lines are coming under fire for conditions and decisions during the early days of the pandemic that compromised the safety of passengers and crew members.

Cruise lines aren't necessarily the next sin stocks, but it's easy to see why the industry is going to have a hard time restoring its image to get passengers back on its ships. Carnival, Royal Caribbean, and NCL have been raising billions to keep their companies afloat during the next few dry months, but the real test will come when the coast is clear but landlubbers are still apprehensive about getting on board.

The cruise lines are trying to do right by their stranded passengers. Folks on canceled sailings are being offered either cash refunds or enhanced values on future sailings. Cunard customers have the option to receive 125% in future cruise credit that can be used in the next two years in lieu of a full refund, but many are cashing out. In an SEC filing earlier this month, Carnival admitted that 55% of its passengers on suspended voyages were asking for full refunds over future cruise credit that includes an additional $300 to $600. Now that we're well into the second month of cancellations, it wouldn't be a surprise if even more people are going the refund route.

This isn't the end of the cruise industry, and I even offered some silver linings for investors with realistic expectations of where these stocks can head after the brutal sell-off from their January highs. However, with the global COVID-19 crisis continuing to intensify and the industry's image continuing to tarnish, the road back -- or ocean back -- is only getting harder.