The company declares a new payout several days ahead of its Q1 earnings release.

Would you like a little shareholder payout in your cereal? On Friday, Kellogg (K -0.03%) added a few nuggets to its investor bowl by declaring a new quarterly dividend. The company will hand out $0.57 per share on June 15 to stockholders of record as of June 1. At the most recent closing share price, the distribution yields 3.6%.

The amount matches that of the previous three dividend payouts, the most recent of which was dispensed in mid-March. Before that, the comestibles company paid $0.56 per share. 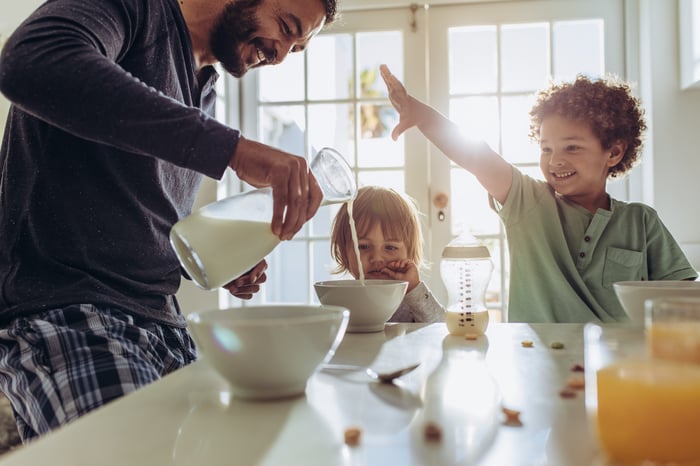 Kellogg, which makes such familiar food and snack items such as Frosted Flakes, Rice Krispies, and Pop Tarts, didn't hesitate to point out that this is the 382nd dividend it has declared on its common stock since 1925. A very mature business, it has been a steady and reliable dividend payer over the decades, although not an enthusiastic raiser. Since mid-2011, its distribution has risen gradually from $0.43 per share to the present level.

The company's latest dividend declaration comes less than a week before it's scheduled to unveil its Q1 of fiscal 2020 results. This should take place on Thursday, April 30, before the market opens. According to Yahoo! Finance, 16 analysts tracking Kellogg collectively expect it to post a slight deterioration in per-share net income, to $0.95 for the quarter against $1.01 in Q1 2019. Sales are expected to decline nearly 5% to $3.38 billion.

On Friday, Kellogg stock fell marginally. That was in contrast to the overall rise of the broader stock market and that of numerous peer food industry titles.