Long-time investors in similar exchange-traded products have seen this story before.

The energy markets have gone through extreme volatility in recent weeks. The combination of in-fighting among major oil-producing nations and plunging demand due to the coronavirus pandemic has sent crude oil prices plunging. Along with it, shares of the exchange-traded United States Oil Fund (USO -1.70%) have fallen significantly as well.

Many oil investors expect that crude prices will rebound, and they're hoping to find a way to profit when it does. Yet although investors can expect a huge bump higher in the fund's share price soon, it won't be for the reasons they like -- and it's a tactic that an investment similar to U.S. Oil Fund has used before.

A reverse split is coming for U.S. Oil Fund

On April 22, United States Oil Fund announced that it would do a reverse split of its stock. The 1-for-8 reverse split is scheduled to take place after the market closes on Tuesday, April 28.

Starting the next day on April 29, shareholders will see the impact. What's likely to happen is that the stock price for the new shares after the reverse split will be about eight times higher than their price from before the reverse split. For instance, if U.S. Oil Fund closes around $3 per share, the new shares would likely trade at roughly $24 per share. 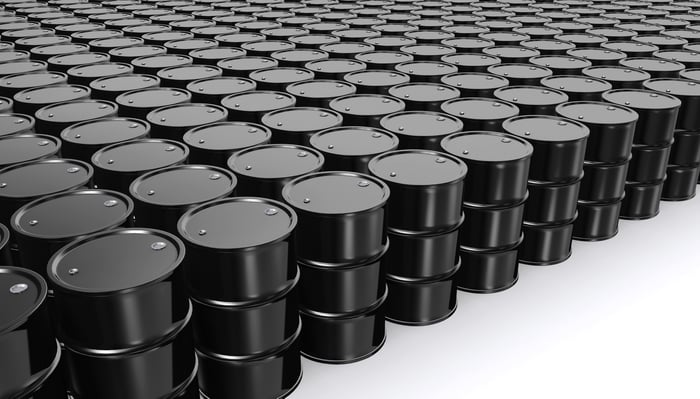 Why this isn't a gusher for investors

You might think that an eightfold price increase would be cause for celebration, but there's a catch. The reverse split will change the number of shares investors own as well, with shareholders keeping one post-split share of U.S. Oil Fund for every eight shares they held prior to the split.

Focusing on the bigger picture

The more important question is why United States Oil Fund needs to do a reverse split. The answer is that its price has steadily fallen over time, and in order to comply with listing requirements, U.S. Oil Fund needs to maintain a share price above $5. The fund manager also states that the move will "increase the marketability and liquidity of USO shares."

Funds with similar investment strategies have routinely had to do reverse splits when situations like this have occurred. The best example is sister fund United States Natural Gas (UNG 0.50%), which attempts to track the spot price of natural gas. Volatile gas prices led that fund to do three reverse splits during its history. A 1-for-2 reverse split took effect in 2011, followed in early 2012 with a 1-for-4 reverse split. Six years later, U.S. Natural Gas came back with another reverse split with a 1-for-4 ratio. In 12 years, shares have lost 99% of their value, and much of that owes to the poor performance of natural gas prices over the same period, other factors related to the fund's structure played their role in hurting returns as well.

Don't bet on U.S. Oil Fund for the long haul

Since crude hit its highs in 2008 around $150 per barrel, United States Oil Fund has lost between 97% and 98% of its value. With the oil futures that the fund currently holds priced at around $23 to $25 per barrel, it should be down only 83% to 85% if it could track oil prices perfectly. There are several reasons for that, but the only thing you really need to know is that the fund hasn't been able to meet investors' expectations in tracking spot oil prices.

It looks like U.S. Oil Fund will survive, as it's made several changes to protect itself from further market disruptions. However, investors should remember that when the stock price jumps after its reverse split, that's not cause for celebration. Instead, it reflects the challenges that United States Oil Fund hasn't been able to overcome by any other means. That's reason enough for energy investors  to think twice before buying shares of the fund as a way to bet on a rebound in crude prices.