Please ensure Javascript is enabled for purposes of website accessibility
Log In Help Join The Motley Fool
Free Article Join Over 1 Million Premium Members And Get More In-Depth Stock Guidance and Research
By David Haen - Apr 26, 2020 at 7:55AM

With positive clinical trial results and a confirmatory study expected to report this quarter, investors should dig in.

Myovant Sciences (MYOV -2.52%) fired a shot across the bow of AbbVie (ABBV 1.11%) when it released phase 3 clinical trial results on April 22. The study evaluating relugolix as a treatment for pain caused by endometriosis met two co-primary endpoints and a slate of secondary endpoints. Relugolix has clearly pointed its crosshairs on AbbVie's Orilissa, approved by the Food and Drug Administration (FDA) in 2018.

The painful condition of endometriosis is caused when tissue similar to the lining of the uterus grows outside of the uterus, according to the Mayo Clinic. The pain, which can be severe, is often exacerbated during the menstrual cycle. Endometriosis can also lead to fertility problems. The Endometriosis Foundation of America says up to 10 million women in the U.S. and 200 million worldwide live with endometriosis. 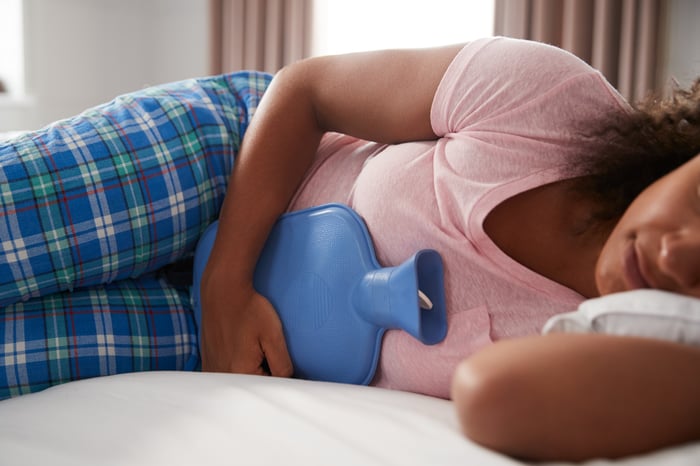 AbbVie's Orilissa posted $93 million in 2019 sales with $91 million coming from the U.S. market. This was its first full year on the market, so it will likely grow considerably as reimbursement challenges get worked out.

Market research firm GlobalData noted in a mid-2019 report that Orilissa sales could reach $1.58 billion for endometriosis-related pain and $985 million for bleeding with uterine fibroids in 2027. The same report projects relugolix revenues in 2028 of $1 billion and $700 million for the two indications.

Myovant's phase 3 "Spirit 2" trial enrolled 612 patients with moderate-to-severe pain in women with surgically diagnosed endometriosis. The three-arm study evaluated relugolix combined with estradiol and norethindrone acetate to placebo over 24 weeks. The third arm tested relugolix by itself for the first 12 weeks followed by the combination for the second 12 weeks. The co-primary endpoints of the study were a reduction of pain in dysmenorrhea (menstrual cramps) and non-menstrual pelvic pain.

For the menstrual cramp endpoint, 75.2% of women receiving the relugolix combo achieved a response compared to 30.4% on placebo. On average, pain was reduced by 75.1%, shifting from severe to mild.

For the non-menstrual pelvic pain endpoint, 66% of relugolix combo-treated women achieved a response compared to 42.6% in the placebo group. Relugolix treatment also met six secondary endpoints including reduction in use of opioids and analgesics. At the start of the trial, 48% of the subjects took opioids to control pain.

How does it compare?

Now, let's see how it stacks up to Orilissa. First, Orilissa can be dosed at 150mg once a day or 200mg twice daily. One quick and important caveat: The drugs were not tested head-to-head in the same trial. Variations between the trials could be responsible for some differences.

The FDA's approval of Orilissa came with a warning for a dose-dependent decrease in bone-mineral density. Greater bone loss was observed in patients on therapy longer. Importantly, the bone loss may not be reversible after stopping treatment. Relugolix-treated patients had minimal bone-density loss. The decrease over 24 weeks was 0.78%. In comparison, twice-daily Orilissa, the dose with comparable efficacy to relugolix, had bone-mineral density loss of 2.61% and 2.49%.

Relugolix appears to have equal efficacy to twice-daily Orilissa. While the once-a-day dosing may be more convenient, being less detrimental in regards to irreversible bone-mineral density loss could be the biggest differentiating factor.

Orilissa's head start in the market could prove favorable for relugolix. Myovant will be able to ride the coattails of AbbVie's efforts to raise awareness among doctors, payers, and patients on the need and value proposition for drugs like these.

Myovant plans to report this quarter from its confirmatory phase 3 "Spirit 1" trial. If that succeeds, then expect the company to quickly seek FDA approval. Biotech investors will want to stay tuned for those results.