Please ensure Javascript is enabled for purposes of website accessibility
Log In Help Join The Motley Fool
Free Article Join Over 1 Million Premium Members And Get More In-Depth Stock Guidance and Research
By John Ballard - Apr 27, 2020 at 10:05AM

Which of these two gaming leaders should you buy?

Tencent Holdings (TCEHY 2.04%) and Take-Two Interactive (TTWO -2.52%) are two of the top video game companies in the $148 billion gaming industry. Both stocks have smashed the broader market but still represent good opportunities to juice your investment returns.

Gamers are probably familiar with Riot Games' League of Legends and the recent launch of Valorant. Riot is a wholly owned subsidiary of Tencent. The company is also behind the popular mobile shooter, PUBG Mobile.

Tencent is a giant in the gaming industry, generating about $16 billion in annual revenue from game sales. The Chinese tech giant is also known for its WeChat and Weixin social media networks, which combined have more than 1.1 billion active users.

On the other side, Take-Two is best known as the creator of the extremely popular Grand Theft Auto franchise, which has sold 290 million copies over its history. Take-Two also has a growing roster of titles from its new Private Division label, including the highly acclaimed The Outer Worlds that released last year.

The company is also an important partner with the NBA in licensing content for the NBA 2K franchise and just recently signed a new multi-year agreement with the NFL to make a series of football games starting next year.

I own shares of both, but we'll compare both companies to see which one could deliver the best returns from here. 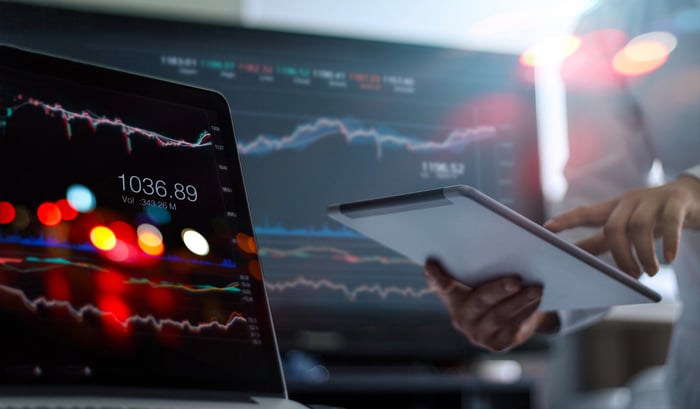 These companies have plenty of cash

In this current economic environment, having plenty of liquidity is crucial. This table shows where both companies currently stand across key financial metrics.

It's clear these companies are not in financial distress at all. Tencent makes its money across a range of digital services, including online games (30% of revenue), social networks (23% of revenue), and online advertising (18% of revenue). Tencent also derives 27% of its revenue from fintech and business services, which include mobile payments and cloud services.

Take-Two derives 75% of its revenue from digital delivery of games, including downloadable versions of games and virtual items sold to players while playing. For example, players can buy virtual currency in NBA 2K to unlock certain features and other content.

Tencent has grown its revenue much faster over the last 10 years, as you can see in this chart. 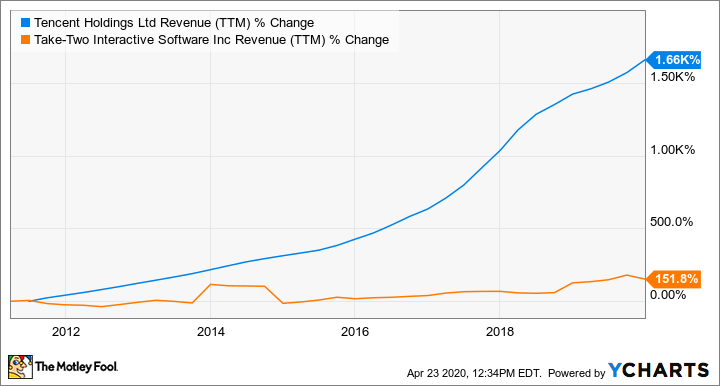 Tencent carries lower risk than Take-Two, given that Tencent makes money from so many different areas. Its growth has been smoother over time, whereas Take-Two has relied on the timing of big releases like Grand Theft Auto (GTA) and Red Dead Redemption (and their franchise sequels) to move the needle.

As for near-term prospects, Tencent expects the COVID-19 outbreak to put pressure on its cloud business due to "delayed implementation of projects," as President Martin Lau explained on the fourth-quarter conference call.

Also, Tencent's media advertising business has suffered lately over a soft economy in China and the timing of content releases on Tencent Video. Media advertising revenue makes up 4% of total revenue but experienced a decline of 15% in 2019. But Tencent should be able to offset any further declines in advertising and cloud services in the near term with growth in online games and social network engagement, both of which have experienced higher demand with more people at home during the outbreak.

Take-Two won't report results for the March-ending quarter for a few more weeks, but there are signs that game companies are going to report strong results.

Activision Blizzard CEO Bobby Kotick recently told CNBC that most of its games were experiencing record levels of engagement during the COVID-19 crisis. Plus, digital sales for the month of March hit a record of $10 billion, according to industry sales tracker SuperData. This is a good sign for all gaming companies, including Tencent.

Take-Two should see strong gains from GTA V. SuperData's March report ranked GTA V as the seventh-best selling title on consoles for the month of March. The game's growing installed base of players will lead to tremendous pent-up demand for the next installment, which should be getting closer but could still be years away.

Since the September-ending quarter in calendar 2018, Take-Two's revenue is up 58%, driven by sales of GTA V, Red Dead Redemption 2, NBA 2K19 and 2K20, The Outer Worlds, and Borderlands 3.

But even with robust sales of GTA V, which continues to outperform management's expectations, Take-Two has increased revenue by just 132% over the last five years, much lower than Tencent's top-line growth of 290%.

Take-Two, however, has outgrown Tencent where it counts -- free cash flow: 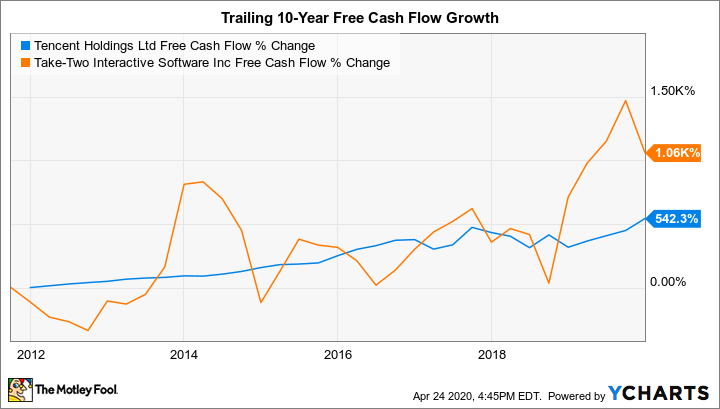 This faster growth for Take-Two reflects the bigger bang for its buck it got from the enormous success of GTA V, which released in 2013 and has sold a staggering 120 million copies. A big release like that will have a more significant impact on Take-Two's growth than it will Tencent's, given that Take-Two generates a relatively small amount of revenue.

Here's how both stocks measure up on valuation:

Given the high expectations investors have for these companies' future growth, both stocks have typically traded at high price-to-earnings (PE) ratios. But Take-Two has traded significantly lower than Tencent based on price-to-free cash flow (P/FCF). Investors can buy Take-Two's faster rate of FCF growth at a discount relative to Tencent's valuation.

As for stock performance, Tencent's share price has only marginally outperformed Take-Two over the last 10 years, but Take-Two has performed significantly better over the last five, three, and one-year periods.

While Tencent is a dominant tech conglomerate that is very diversified across business segments and dozens of video game titles, Take-Two has been well managed under the leadership of Strauss Zelnick, who took over as CEO in 2011.

Take-Two has emphasized on recent conference calls that it has the deepest game development pipeline in its history, including several titles aimed at the fast-growing mobile game market, where Tencent has been experiencing success lately in its online games business.

If you like investing in more predictable companies that consistently grow revenue every year, Tencent is probably the better growth stock for you. But if you don't mind some inconsistency in year-to-year growth, I believe Take-Two offers more upside over the long term, especially given that it's relatively small, generating just $2.8 billion in annual revenue compared to the $149 billion that is spent annually on games across the industry.