Please ensure Javascript is enabled for purposes of website accessibility
Log In Help Join The Motley Fool
Free Article Join Over 1 Million Premium Members And Get More In-Depth Stock Guidance and Research
By Rich Duprey - Apr 27, 2020 at 8:14AM

It was already going to be a weak performance before the COVID-19 outbreak.

Heading into what should be Harley-Davidson's (HOG -1.04%) prime motorcycle buying season, the bike maker instead confronts an economy where the novel coronavirus pandemic has forced manufacturing to be suspended, the closure of most dealers, and massive unemployment rates.

The first quarter is never one of Harley-Davidson's brightest sales periods as the winter months typically provide a lull to the more frenetic second and third quarters, which typically account for almost two-thirds of total global sales.

Yet with the market for big, expensive motorcycles already in sharp decline, it's likely investors will see an all but dead performance from Harley when it reports earnings on April 28. 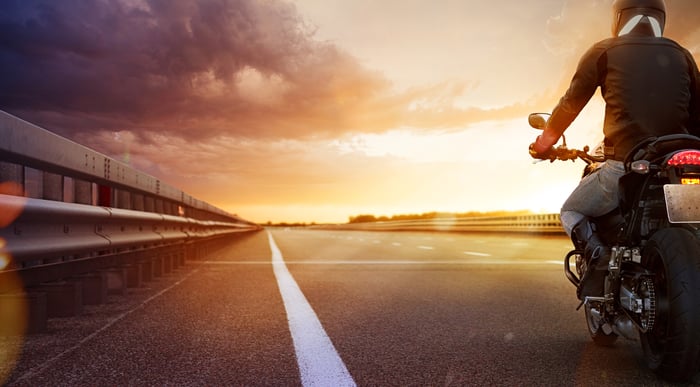 The worst sales period ever?

The bar was set fairly low for the bike maker as Harley sold just 28,000 motorcycles in the U.S. last year, fewer than it sold even during the last decade's Great Recession. There was no indication the trend toward ever-lower sales was abating before the pandemic and it will have only been exacerbated by it.

Harley can't even look to international sales to prop it up somewhat as it was, of course, Asia that was first crippled by the COVID-19 outbreak, followed by Europe, before it ever really began to be felt here. That means Harley's sales will suffer a potentially devastating global contraction.

International sales accounted for 42% of total revenue last year, and though the bike maker was looking for them to represent half eventually, that effort may have been dealt a substantial setback.

It probably also pushes back Harley's plans for introducing its new bikes, the Pan America adventure bike and the Bronx streetfighter models, that were supposed to come out later this year as well as other future models that were intended to help it break from its reliance on heavyweight motorcycles.

As for its LiveWire electric motorcycle, it's fair to expect there were few sales made of this expensive concept bike.

Limping out of trouble

Harley-Davidson still had sufficient liquidity at the end of 2019 with $830 million in cash, and over $1.8 billion in available credit, suggesting it should be able survive the pandemic. Yet as the mandated closures and social distancing practices persist, the bike maker faces an increasingly dire situation that will cascade over it.

Customers will likely hold off on any purchases they were going to make, or abandon their plans altogether. Its dealers will come under severe financial distress requiring greater support from the parent company to keep them afloat. Harley's ability to access financing will be inhibited, and current owners who financed their purchases through the bike maker's financing arm will be unable to repay their loans. These events could likely cause its loan portfolio to substantially deteriorate.

It's also in the midst of an upheaval in the C-suite after its CEO resigned and an activist investor argued for some changes to be made in management. While the private equity firm ended up acquiescing to almost all of the motorcycle maker's demands in exchange for watered-down representation on the board, it's possible it could nudge the company to move in the direction needed to reverse its decline.

This was already going to be an ugly quarter for Harley-Davidson, but it may only be a prelude to worse outcomes to come in the quarters just ahead.