Two of the strongest momentum stocks in the space are computer graphics stalwart Adobe (ADBE 2.48%) and DocuSign (DOCU 2.77%), a relative newcomer that has made a big impact in a short amount of time. Yet which is the better buy today? 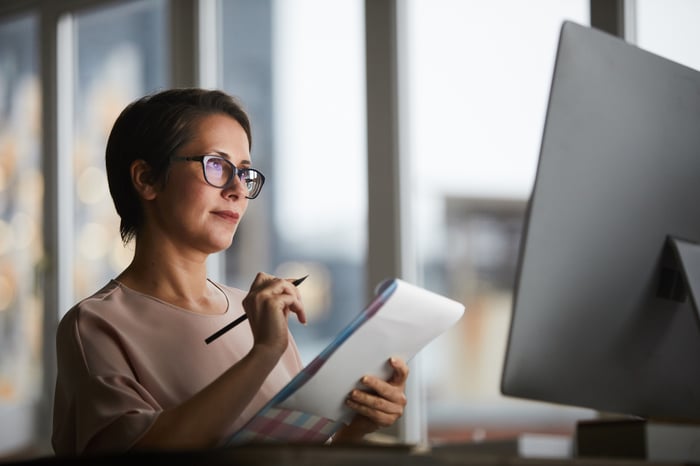 Steady tech blue chip vs. the new kid on the block

Adobe was founded back in 1982, inventing the breakthrough computer graphics programming language PostScript, and then capitalized on that licensing revenue to invent many of the standard computer graphics software used by businesses today. These include Adobe Photoshop, Adobe Premiere Pro, and the portable document format (PDF). Through a series of acquisitions, Adobe also acquired the Flash and Shockwave internet video technologies, as well as the Dreamweaver web authoring software. In recent years, Adobe has also expanded into marketing software that enables digital marketing campaigns and provides detailed analytics to benefit businesses users.

Meanwhile, DocuSign was founded in 2003, but just went public in April 2018. The company pioneered the e-signature product, which took off around 2012-2013, when large enterprises began adopting the digital solution for what used to be an inefficient, manual, and time-consuming process of signing contracts and agreements.

DocuSign has also made some small bolt-on acquisitions of late, such as last year's SpringCM software and this year's Seal software acquisitions, combining them with internal investments to create its DocuSign Agreement Cloud, a suite of services that covers all the stages of a document's life-cycle. The Agreement Cloud integrates with over 350 third-party applications, and is chock-full of time and money-saving features like AI-based document searches that can greatly cut down on time spent on legal reviews, as well as industry-specific document and signature formats such as Agreement Cloud for mortgages.

Adobe also has an e-signature product it acquired with the 2011 acquisition of EchoSign. However, according to Datanyze, it appears DocuSign still has a dominant market share of about 57% in e-signature, vs. Adobe's mere 5.5% e-signature market share, down with a host of other challengers under 10%.

As you can see, Adobe is much, much bigger -- over 10 times bigger than DocuSign by revenue. Predictably, for a more mature business, Adobe is growing at a slower pace, but is profitable, while DocuSign is not, though DocuSign is generating cash flow.

One thing to note is that Adobe is generating nice operating leverage, meaning that its profits are growing much faster than revenue. That's because its business has much greater scale, which can leverage a more stable cost base. In fact, Adobe's operating income grew even faster than DocuSign's operating losses narrowed. Obviously, DocuSign is investing heavily to grow its business and cement its leading position in document management. For one thing, it has to fend off the large and well-funded Adobe!

Therefore, it appears Adobe is the safer choice of the two, from a profitability standpoint.

DocuSign isn't yet profitable, but we can still take a look at the price-to-sales ratio to gauge each stock's relative valuation:

On a price-to-sales ratio, Adobe is a bit cheaper than DocuSign, but remember, DocuSign's revenue growth is currently twice that of Adobe's, profits notwithstanding. In that light, DocuSign seems relatively reasonably priced given the revenue growth trajectory and market opportunity.

DocuSign thinks that its core e-signature business has a $25 billion addressable market, while its other products could generate another $25 billion when including all of its current products. That means DocuSign's mere $1 billion or so revenue run rate is just 2% of what it believes to be its addressable market.

Adobe does have a much larger market based on its more diverse product portfolio across computer graphics, advertising, and marketing tech, but Adobe is also a more mature business. That means it's unlikely to have the revenue growth potential of DocuSign.

Either company would make a fantastic addition to any investor's technology growth portfolio today. For more risk-averse investors, I'd say go with Adobe, for its diversity, profit growth, and financial heft. However, for younger investors who may want more upside potential and can tolerate more risk and volatility, I'd say go with DocuSign. It's smaller, but growing fast, making strategic acquisitions, and has the ability to grow its revenue several times over during the next decade. Still others may want to buy both fantastic companies -- and there's nothing wrong with that!