Please ensure Javascript is enabled for purposes of website accessibility
Log In Help Join The Motley Fool
Free Article Join Over 1 Million Premium Members And Get More In-Depth Stock Guidance and Research
By Rekha Khandelwal – Apr 28, 2020 at 5:40AM

Some key characteristics make the stock attractive even in these challenging times, but only if you are looking at the long term.

The energy sector was already facing an oil supply glut prior to the COVID-19 pandemic, and with businesses closed and people advised to stay at home, demand for oil and gas products has been throttled and storage capacity has reached its limit. This resulted in oil futures tumbling to negative territory recently.

Every pipeline firm aims for predictable, stable cash flows. However, the degree to which the firms manage to achieve that varies significantly.  Enbrige has several assets generating pretty stable cash flows. This sets it apart from several of its smaller, more risky peers. Enbridge's key "mainline" pipeline system accounts for roughly 30% of its EBITDA, according to a company update given this month.

The pipeline is usually oversubscribed due to its low tolls and the limited pipeline capacity that is available to transport oil from Canadian oil sands. However, with demand for oil products cratering, the pipeline currently has unused capacity. That is surely going to hit the company's profitability and that is likely to be a problem until demand rises again -- a process that may well take more than a year. 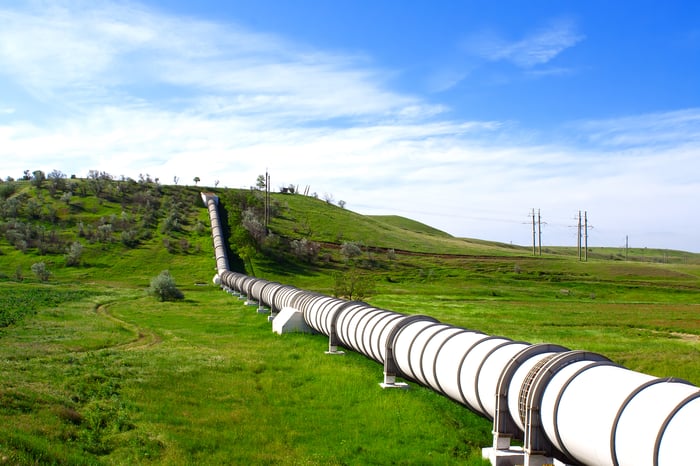 In a recent presentation, Enbridge CEO Al Monaco said that a 100,000-barrel-per-day reduction in volume would affect the mainline system's margins by CA$12 million per month. To put this in context, the system earns CA$13.7 billion in annual EBITDA. The system transports roughly 2.8 million barrels per day of liquids and a reduction in daily volume could be much more than 100,000 bpd in the second quarter.

The company expects a roughly 20% to 25% reduction in Western Canada's oil production in the second quarter. However, the volumes on the mainline system may fall less because of its competitive pricing. For example, transport through rails would be far more impacted compared to pipeline transport.

The Enbridge mainline system's toll structure comes up for renewal in July 2021.  While that looks like additional uncertainty in a very bad environment, the rate structure is independent of volume commitments and Enbridge has been discussing rates with shippers for nearly two years. Given the current environment, the company isn't increasing rates much. In fact, it's planning to reduce them for some contracts. The renewal of the toll structure, which requires regulatory approval, should not be an issue and when demand for oil rises again, the mainline system should be be among the first to see a rise in volumes because of its competitive rates.

Overall, Enbridge's gas operations serve primarily local distribution companies and power plants. The transmission volumes are largely reservation-based, which means that customers pay a fixed reservation charge for the capacity reserved regardless of volumes, plus a variable component based on volumes. So, the company earns the fixed charges, even if the volumes fall.  Roughly 90% of gas business revenue comes from investment-grade customers. At the company level, roughly 95% of Enbridge's revenue comes from investment-grade customers. Enbridge's gas operations, which account for roughly 40% of its earnings, should be less affected by the coronavirus pandemic.

With debt-to-EBITDA below 5, more than CA$12 billion in liquidity, and no requirement to access capital markets for a year, Enbridge's balance sheet position looks strong. 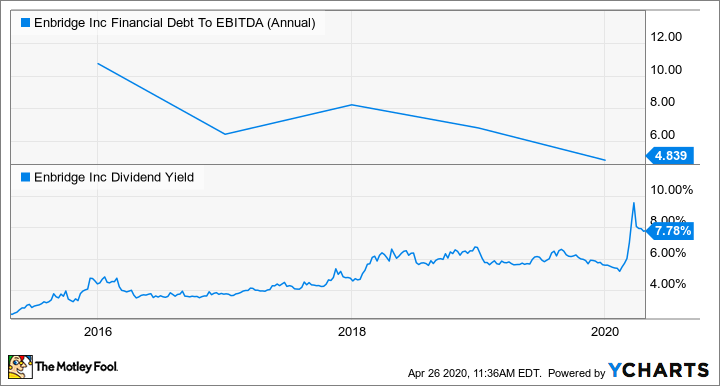 Overall, Enbridge is one of the energy companies that looks most likely to survive the current crisis. However, the recovery time frame does not look that certain. With an attractive yield, it pays to wait for the stock to recover. For those who can stomach short-term volatility, the stock surely looks a buy.