There was plenty of good news buried beneath the big drugmaker's negative headline numbers.

At first glance, Pfizer's (PFE -1.40%) first-quarter results weren't anything to smile about. The big drugmaker provided its Q1 update before the market opened on Tuesday. Pfizer reported Q1 revenue of $12 billion, down 8% year over year. The company's earnings slid 12% to $3.4 billion.

Those kinds of numbers wouldn't typically make investors happy. But some investors actually liked Pfizer's Q1 results despite the declining revenue and earnings, with the big pharma stock even rising at the market open on Tuesday. Here are three reasons why. 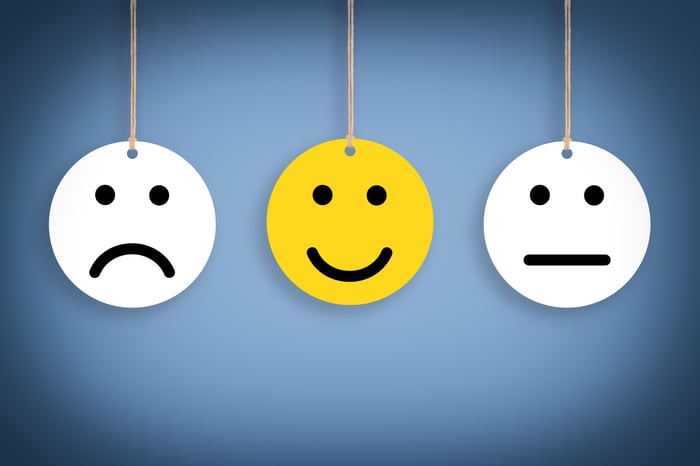 Sure, Pfizer's top and bottom lines slipped from the results posted in the prior-year period. But the company still managed to beat Wall Street estimates across the board.

The average analysts' Q1 revenue estimate was $11.87 billion. Pfizer's actual total revenue topped that estimate by nearly $160 million. The drugmaker came a lot closer to the most optimistic analyst's revenue estimate for the first quarter than it did to the most pessimistic estimate.

Pfizer reported first-quarter adjusted earnings per share of $0.80. This handily beat the consensus Wall Street estimate of $0.73 per share. And Pfizer's result came in just a penny below the highest analyst earnings estimate of $0.81 per share.

You have to think "old" Pfizer and "new" Pfizer when interpreting the company's Q1 results. The revenue and earnings declines belong to the "old" Pfizer. But the "new" Pfizer delivered strong growth.

The prior-year period revenue and earnings totals included Pfizer's consumer sales. However, the company spun its consumer unit off in 2019 and combined it with GlaxoSmithKline's consumer business. Adjusting for this transaction, Pfizer's revenue slipped by only 1% year over year, not 8%.

Pfizer is also planning to spin off its Upjohn business and merge it with Mylan to form a new company later this year. Upjohn's Q1 sales plunged 37% year over year, primarily because of the loss of exclusivity in the U.S. for Lyrica and lower sales in China for Lipitor and Norvasc.

When you remove Upjohn from the picture, however, the "new" Pfizer delivered year-over-year operational revenue growth of 12% thanks to solid performances from Eliquis, Vyndaquel, Ibrance, and Inlyta. That's the kind of growth investors know they can expect from Pfizer in the not-too-distant future.

3. Pfizer is sticking with its full-year guidance

A lot of big companies are withdrawing their full-year 2020 guidance in light of the ongoing COVID-19 pandemic. Others are lowering their outlook. Not Pfizer.

The big pharma company maintained its previous full-year 2020 guidance. It still expects revenue of between $48.5 billion and $50.5 billion even with some foreign currency headwinds. Pfizer also continues to project adjusted diluted earnings per share between $2.82 and $2.92.

It's not that the COVID-19 outbreak hasn't had any impact on Pfizer. In March, the company paused enrollment in some ongoing clinical studies and delayed beginning most of its planned new clinical trials. It has also encountered a few distribution issues related to the pandemic.

However, Pfizer began to restart patient enrollment and initiate new clinical trials again in late April. The company has avoided any significant disruption to its supply chain. It also expects that business will return to normal for the most part in the second half of the year.

The biggest thing to look for with Pfizer in the months ahead is the expected closing of its Mylan-Upjohn transaction. Pfizer CFO Frank D'Amelio said that the "new" Pfizer that will emerge from this deal should be in a position to grow revenue and adjusted earnings at a level that will rank the company "among the industry leaders."

Pfizer could also have news from its COVID-19 efforts. It teamed up with BioNTech to develop a COVID-19 vaccine. A clinical study in Germany of experimental COVID-19 vaccine BNT162 is already in progress, with plans for a U.S. clinical trial soon. The company is making plans to ramp up capacity to potentially produce hundreds of millions of doses of the vaccine next year. Pfizer also hopes to begin a clinical study evaluating its lead antiviral candidate in the third quarter, at least three months earlier than initially projected.