Please ensure Javascript is enabled for purposes of website accessibility
Log In Help Join The Motley Fool
Free Article Join Over 1 Million Premium Members And Get More In-Depth Stock Guidance and Research
By Dave Kovaleski – Apr 28, 2020 at 6:00AM

GreenTree Inns are getting back to business.

Few industries have been hit as hard during the coronavirus pandemic as hotels, with travel basically drying up or slowing immensely for the foreseeable future.

Many of the large hotel chains have been forced to close hotels, furlough workers, impose layoffs, and cut salaries to navigate the storm. Stock prices have plummeted 30% to 40% -- and higher -- for most in the industry. But one hotel company has bucked the trend -- GreenTree Hospitality Group (GHG -1.96%). The stock is up about 11% this year, as of Monday's close. Here's why.

GreenTree Hospitality is a hotel company based in Shanghai, China, that launched in 2004. It owns the GreenTree Inn hotel brand, which is an eco-friendly chain mostly in the midscale segment, which falls somewhere between budget and luxury. It has close to 4,000 locations around the world, with the vast majority of them in China. In 2015, the company expanded to the United States and now has 18 GreenTree Inns in the U.S. There are eight in Arizona; three in Colorado; two each in California, Texas, and New Mexico; and one in Missouri. 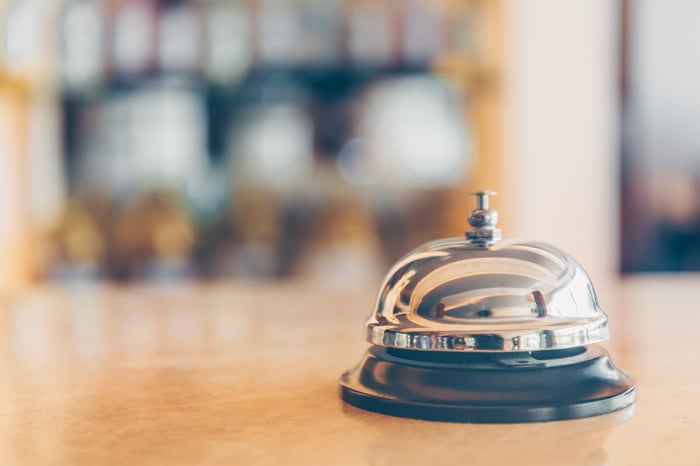 The company came into 2020 on a major growth arc. It opened 607 hotels last year, a 9% increase over the previous year. The average daily room rate increased 3.6% on the year, and the occupancy rate was 81%, down 1 percentage point from the previous year. Revenue per available room, or RevPAR -- a key measure of hotel profitability -- was up 2% year over year.

In the fourth quarter of 2019, the company increased revenue 20% over the previous year's quarter to $41.6 million. The increase was due to the opening of 190 franchised and managed hotels, RevPAR growth, and the integration of two acquisitions -- Argyle Hotel Management Group in Australia and Urban Hotel Group in China. Net income for the quarter was up 15% year over year to $18.7 million. Earnings per share in the quarter was up about 15% to $0.18.

"With almost 4,000 hotels in operation and almost 1,000 under construction, our foundation is stronger, our pipeline is bigger, our teams are more focused, and we are better positioned to grow, in spite of the current crisis," Alex Xu, chairman and CEO of GreenTree, said in the fourth-quarter earnings release, which came out April 14. "We are confident that we will deliver another year of outstanding services to our guests and strong performance to our franchisees and shareholders."

Why it was able to reopen most hotels

In the first quarter, some GreenTree hotels in China were forced to close and others were used to put up healthcare workers and quarantined travelers. The company waived fees and provided financial support to its franchisees in the first quarter. It also implemented various hygiene protocols, established self-quarantine rooms for employees and guests, and provided free health insurance for its workers.

However, the company was able to reopen 93% of its hotels on March 31 when the national shelter-in-place rules were lifted. Company officials credited the Chinese government for containing the spread of COVID-19. Since then, the company has had 51.6% occupancy, up from an average of 21.5% on Jan. 31.

GreenTree updated its guidance for the quarter and the year. It expects a 30% to 35% drop in revenue year over year in the first quarter. But business is expected to gradually return to normal. By the end of the second quarter, the company expects to have occupancy rates at 80% or above, said CFO Selina Yang on the fourth-quarter earnings call. Those rates are expected to maintain in the third and fourth quarters with the average daily room rate similar to what it as last year.

For the full year 2020, GreenTree anticipates a 10% to 15% drop in revenue. That's going to be far better than most of its peers. The market has reacted favorably, as the stock price is up about 13% year to date. It's a cheap stock with earnings potential that looks like a good buy right now.

GreenTree Hospitality Branches Out From the Midscale Segment