Catalent expects to be ready to manufacture the drug giant's lead COVID-19 vaccine by January.

Shares of drug manufacturer Catalent (CTLT 4.81%) were up by 10% at 2 p.m. Wednesday after the company announced it had signed an agreement with the Janssen Pharmaceuticals subsidiary of Johnson & Johnson (JNJ 0.86%) to manufacture a COVID-19 vaccine. The agreement includes joint investment in expanding the capacity of Catalent's Bloomington, Indiana manufacturing facility. The financial terms of the deal were not disclosed.

Catalent plans to hire 300 workers for the plant starting in July and be ready to support a 24/7 manufacturing schedule by January. The 875,000 square-foot Bloomington facility has expertise in drug substance development and manufacture, and the company said the scale-up would involve the use of high-speed machines for vial filling and carton loading. 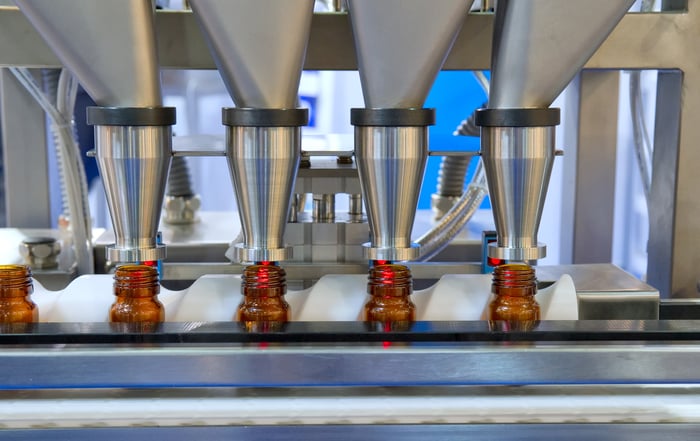 Johnson & Johnson has said that its goal is to rapidly supply more than 1 billion doses of a SARS-CoV-2 vaccine globally on a not-for-profit basis, but the company has yet to start human trials of its lead vaccine candidate. Phase 1 clinical studies are scheduled to start in September, but Johnson & Johnson said that it was planning to begin manufacture of the medicine "at risk" for emergency use, which should position it with a large supply pending the outcome of the studies.

Last week, Johnson & Johnson announced it had signed a manufacturing agreement with Emergent BioSolutions (EBS 3.90%) worth $135 million for contract development and manufacturing services for the COVID-19 vaccine. Shares of Emergent were falling Wednesday on the Catalent news, but it's likely the two deals complement each other, with Emergent producing the drug substance itself in a facility that's partnered with the Department of Health and Human Services for that purpose.