Please ensure Javascript is enabled for purposes of website accessibility
Log In Help Join The Motley Fool
Free Article Join Over 1 Million Premium Members And Get More In-Depth Stock Guidance and Research
By Jon Quast – Apr 29, 2020 at 11:19AM

One metric was so unexpected it surprised even Spotify.

Streaming-audio platform Spotify Technology (SPOT -0.22%) was trading higher on Wednesday after reporting first-quarter earnings results prior to the market open. As of 11:36 a.m. EDT, shares were up 13%, though they had traded as high as 17% up during the session.

Among the most surprising takeaways from Spotify's results: Both monthly active users (MAU) and premium subscribers are up -- with premium-subscriber growth outpacing expectations. 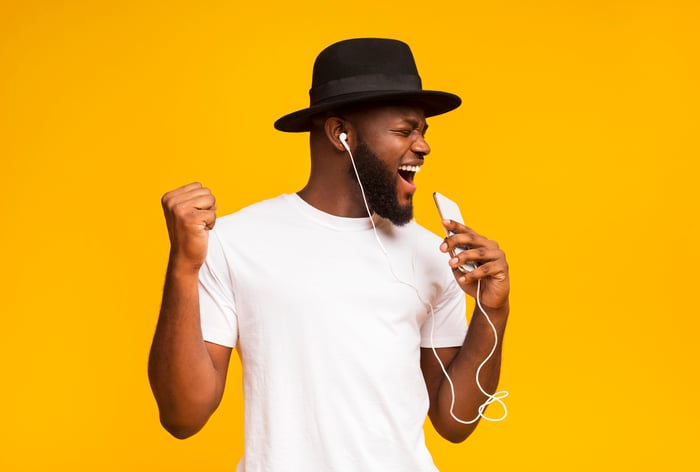 Initially, investors theorized that Spotify's business could benefit from the COVID-19 pandemic, as trapped-at-home consumers listened to more music and podcasts. But then some began noticing a troubling trend. One of the first countries to lock down was Italy, and time spent streaming audio dropped in that country. According to Quartz, streaming of the top 200 songs fell 23% between March 3 and March 17.

Investor expectations fell with this consumption-decline revelation. However, today Spotify noted that it actually gained new listeners. It acknowledged that audio consumption did indeed decline. But MAU grew 31% year over year (in line with guidance), and premium subscribers also grew 31%, which was ahead of guidance.

You can't fault pleasantly surprised investors for bidding up this technology stock today. The disparity between consumption decline and user growth surprised even Spotify. As stated in its letter to shareholders, "when we saw consumption starting to decline we would have assumed that MAUs and Paid Subscribers would be negatively impacted, but that wasn't the case."

Spotify has spent a lot on its original podcast library as part of its strategy to grow premium subscriptions. However, one of the most apt times to consume podcast content is during the work commute. Many work commutes aren't happening right now, which is why audio consumption fell. While it's nothing to fret over yet, investors will need to stay in tune with consumer podcast engagement in coming quarters.

Another area to keep an eye on is advertising revenue. Ad revenue was 20% below expectations during the final three weeks of March, causing the company to miss expectations in that area. It's not a dire situation, as 92% of Q1 revenue came from premium subscriptions. But it's worth tracking in coming quarters nonetheless.