The NBA's media rights deal with ESPN and TNT is worth $2.6 billion per year.

The sports economy is reeling over the coronavirus pandemic. With sports events on pause, ticket holders are wondering if they are going to be refunded for canceled games. Meanwhile, advertisers and sponsors are scrambling to figure out how to recover the lost value from not having brands in front of millions of sports fans.

The impact of COVID-19 has been particularly bad for the NBA, which has enjoyed tremendous growth over the last five years and whose season would otherwise be in its playoff run right now. Disney's (DIS -3.20%) ESPN and ABC, and AT&T's (T -1.22%) TNT are the top networks that broadcast NBA games every year. Here's how much ad revenue is at stake for these companies. 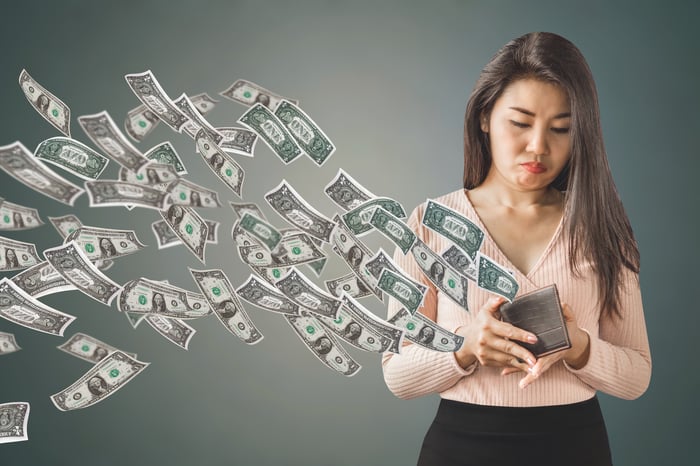 A big void to fill

The most lucrative part of the NBA season is the playoffs, which typically run from April through the middle of June. The NBA generates about $1.2 million in ticket revenue per game during the regular season, but that goes up to about $2 million during the playoffs.

Ad revenue is another layer of the league's value. It's estimated that TV networks generated around $1.5 billion in ad revenue for the entire NBA season last year, according to research firm Kantar. Disney's ESPN and AT&T's WarnerMedia, which operates TNT, will be missing some of its most lucrative, highest-rated programming during this shutdown.

In 2014, ESPN and TNT signed a nine-year deal to broadcast NBA games that was worth $2.66 billion annually. Disney's ABC became the exclusive broadcaster for the NBA Finals. The NBA hasn't decided about whether the rest of the current season will be canceled, but analysts from MoffettNathanson estimate that ESPN and ABC could lose $481 million if the rest of the season is canceled, including the playoffs. TNT would lose $211 million.

AT&T recently reported its first-quarter results. The WarnerMedia segment posted a $1 billion drop in revenue, partly due to strong theatrical results in the year-ago quarter and also reflecting lower advertising revenue as a result of the NCAA March Madness cancellation.

Another problem for Disney is declining cable subscribers for ESPN. It's possible that with no games to watch, some viewers may decide to drop cable and accelerate the cord-cutting trend. However, Disney has been able to mitigate subscriber losses with growth in ESPN+, which had 6.6 million subscribers at the end of calendar 2019.

Disney is hurting the most

This is a major setback for the NBA, which has seen total league revenue more than double since the media rights deals signed with ESPN and TNT in 2014. Forbes estimates that the value of all NBA teams has risen nearly sixfold since 2010, with team values rising 14% last year.

There were six teams sold between 2011 and 2014 for an average of $400 million, according to The Wall Street Journal. Forbes estimates that the average team value reached $2.12 billion last year.

The reverberations felt by NBA team owners may not be quite as severe for Disney's empire, but the crisis is still hurting the House of Mouse. The ad revenue lost to Disney is not coming back. Ad sales are based on TV ratings, but with no games, there are no viewers, and no viewers mean Disney has nothing to sell to advertisers.

One estimate puts the total loss to broadcasters for canceled NBA, MLB, and NHL games this year at $1 billion. However, there could be terms in these contracts that allow for some compensation to the TV networks, such as allowing ESPN to air more games in the future, according to an analyst from Morningstar. But specific contract terms are unknown.

Naturally, several Wall Street analysts have downgraded shares of Disney, while most analysts have maintained a buy rating on AT&T stock. Disney generates more than a third of its annual revenue from media networks, while WarnerMedia contributes a much smaller percentage of revenue to AT&T's business.