Please ensure Javascript is enabled for purposes of website accessibility
Log In Help Join The Motley Fool
Free Article Join Over 1 Million Premium Members And Get More In-Depth Stock Guidance and Research
By Scott Levine – Apr 29, 2020 at 7:30AM

With the volatility in the market due to the coronavirus pandemic, investors are paying closer attention to the risk profiles of their investments. Where does this fuel cell specialist fit in?

Tracing its history back more than 50 years, FuelCell Energy (FCEL 0.59%) is one of the most recognizable names in the renewable energy niche of fuel cell technology. And while the company has been operating for over half a century, it has only been available to investors on the public markets since 1992.

Although the stock has vacillated wildly over its lifetime, over the past six months, it has been alluring for shareholders, who have driven shares up more than 560%. Investors, who have taken note of this feat, may be wondering, how well the stock could fit into their portfolios. While there are plenty of variables for prospective investors to consider, one of the most important is the degree of risk. With this is mind, let's take a closer look at FuelCell Energy. 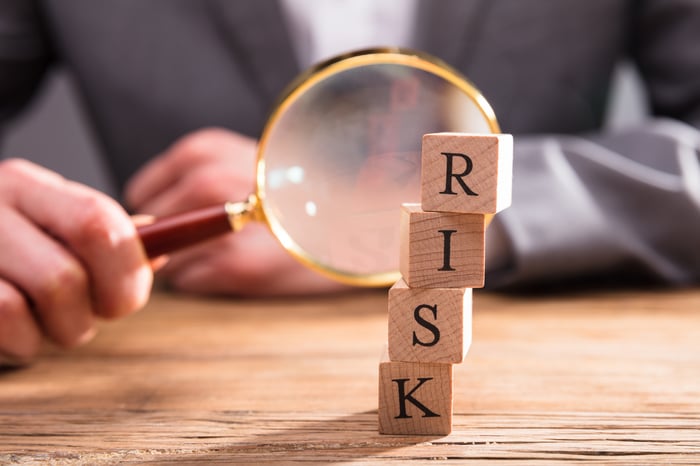 Although FuelCell Energy had brushes with profitability early on in its life as a public company, the last year that it reported a profit was 1997. In turning to the more recent past, it becomes evident that the company's challenges in reporting a profit are considerable as it has averaged an annual net loss of $46.8 million over the past 10 years.

In fact, the company seems to be moving further away from profits, as it has failed to achieve a meaningful improvement in either its gross or operating margins. This is partly due to its decision to move away from selling its projects upon their completion and to focus instead on utility-scale, power-purchase agreement opportunities. 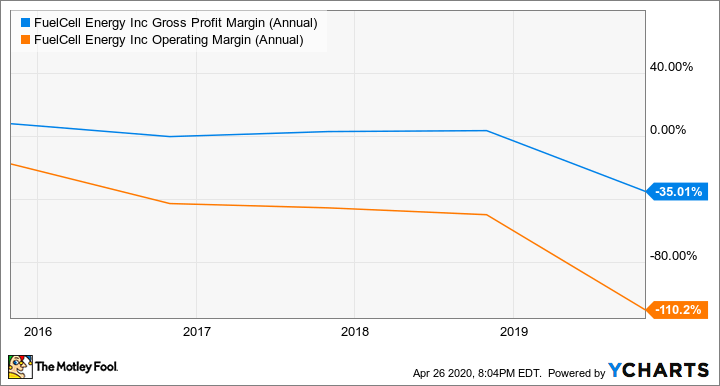 This propensity to continually generate a net loss is a considerable risk factor for the company. Digging into the company's most recent 10-K, however, investors will find what is arguably the most disconcerting articulation of this fact as the company states that "We may never become profitable. Even if we do achieve profitability, we may be unable to sustain or increase our profitability in the future."

Keeping count of the customers (and it doesn't take much)

Meanwhile, the competition which FuelCell Energy faces from peers like Bloom Energy (BE -0.99%), Plug Power (PLUG -0.14%), and Ballard Power Systems (BLDP -0.33%) (in addition to the numerous privately held companies) poses additional risks for its future success.

Paying the bills is no easy task

With the inability to grow profits -- or generate positive cash flow -- FuelCell Energy must consistently rely on tapping the debt and equity markets to keep its lights on. 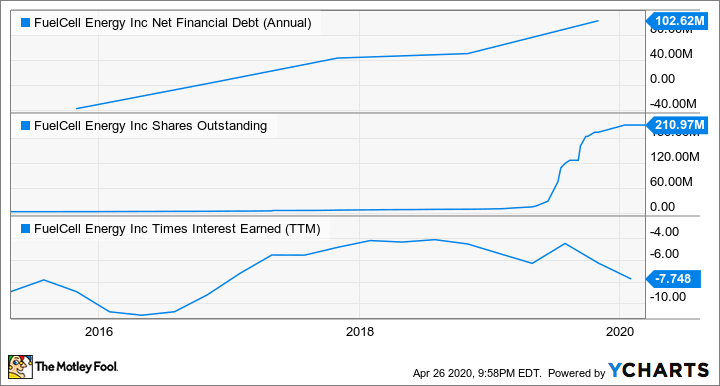 Fraught with risk, this is hardly a sustainable business model: Take on debt, dilute shareholder value, rinse, repeat. One of the clearest indications of the danger behind this tightrope-walking act is the increasing difficulty which the company is finding itself in regarding the servicing of its debt. Nonetheless, without the near-term prospect of generating positive cash flow, it's the tactic that management is left with for the time being.

Unable to generate profits or positive cash flow, FuelCell Energy is a company that offered the potential of a growth stock at one time but has subsequently failed to deliver. Although the company scored a minor victory recently with the release of its Q1 2020 earnings, it announced the closing of its manufacturing facility in Connecticut on March 20. Since then, the company has neither announced the reopening of the facility nor has it indicated when it will reopen. In addition, management hasn't commented on how the pandemic will affect the company's operations or financials. Besides the uncertainty of the coronavirus, the company's concentrated customer base and persistent peer competition represent factors which indicate that this is a stock with a considerable amount of risk -- a stock which only those with an ample tolerance for risk should consider adding to their portfolios.