Please ensure Javascript is enabled for purposes of website accessibility
Log In Help Join The Motley Fool
Free Article Join Over 1 Million Premium Members And Get More In-Depth Stock Guidance and Research
By Jeremy Bowman - Apr 29, 2020 at 9:05AM

Shares of the crafty retailer look like a bargain. Is it a value or a value trap?

The retail sector has been decimated by the coronavirus crisis.

Stores have closed en masse, inventory has piled up, and retailers have been forced to tap credit lines and debt financing in order to stay afloat.

Like many retailers, Michaels (MIK), the arts-and-crafts purveyor, has seen its stock plunge during the pandemic. Shares of the chain have fallen nearly 50% since the coronavirus began to rattle markets, as you can see from the chart below. 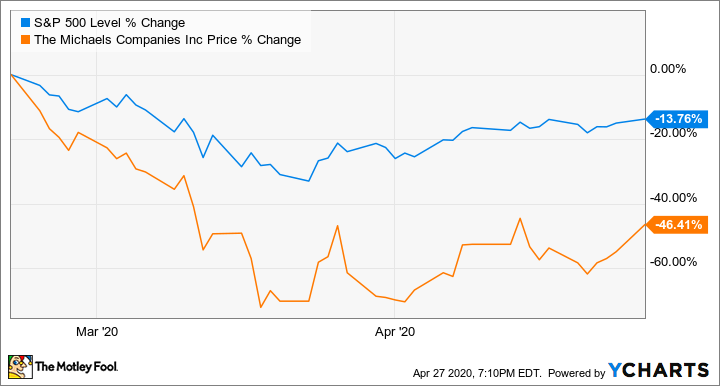 Michaels stock actually hit an intraday low of just $1 on March 18 in the aftermath of its fourth-quarter earnings report, but since then, the stock has rebounded back up to close to $3.

However, shares are still well below its historical levels. Since its IPO in 2014, the stock traded near $20 for most of its publicly traded history, but began sliding in 2018 as profit and revenue growth slowed and comparable sales turned negative. Last year, comparable sales fell 1.9%, and revenue dipped 3.8% to $5.07 billion as it shuttered its Aaron Brothers and Pat Catan's chains. On the bottom line, adjusted earnings per share declined from $2.35 to $2.11.

Those are all negative signs, of course, but does Michaels stock deserve to be down nearly 90% from its peak in 2018? That it was trading at much higher levels not so long ago is one argument for buying the stock today. Let's take a look at some others. 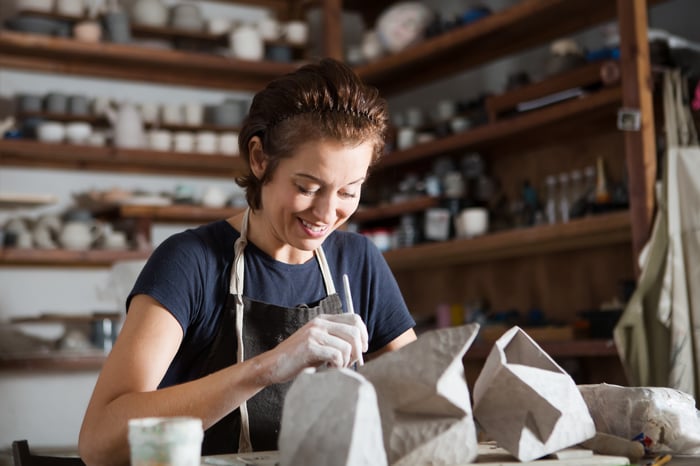 By almost any conventional definition, Michaels shares are a bargain. Based on last year's adjusted earnings per share (EPS), the stock trades at price-to-earnings ratio of 1.3. That is basically unheard-of. The average stock on the S&P 500 index trades at a P/E of 21.

That means that Michaels can effective pay shareholders back in just 16 months. Of course, the company is not going to be able to generate that much of a profit this year because of COVID-19, but even before the sell-off its P/E was less than 4, which is still unbelievably cheap. If Michaels can stabilize its business after the crisis and return to the level of profitability it saw last year, there's little doubt that the stock will be significantly higher than it is today.

Social distancing could be a tailwind

Stores are beginning to reopen as states lift their stay-at-home orders, but the social distancing that has typified the coronavirus will be with us for months, if not into next year. That means that the kind of at-home hobbies that have become popular in recent weeks like puzzles and baking could continue to occupy more of Americans' time as large gatherings will likely be frowned upon, if not banned outright. With schools closed for the rest of the school year in a number of states, parents may be in search of crafty projects for their kids as well.

That could be a benefit for Michaels, since the kind of products the company sells fit in with the stay-at-home economy. In fact, though the market has punished Michaels stock similarly to other brick-and-mortar retailers, the company has thus far proven more resilient than its peers. It hasn't closed all of its stores like most nonessential brick-and-mortar retailers, and it also hasn't given any kind of an update ,so it's current status is a mystery. It's likely that the company has not taken the kind of emergency steps like borrowing money or furloughing employees, the way many of its peers have, or it would have reported that to investors.

Michaels has made efforts to offer curbside pickup in locations where stores are closed and also offers same-day delivery on its website. Even as stores are closed, online sales are probably surging, as brick-and-mortar retailers have seen a boom in online demand. Bed Bath and Beyond, for instance, said its online sales are up 85% month-to-date through April 24,  while Target said its digital sales soared 275% this month.

When Michaels announced a new CEO at the end of December, the stock soared, jumping by a third in one day. Investors cheered the news that Ashley Buchanan, Walmart's chief merchandising and chief operating officer for U.S. e-commerce, was taking over, as e-commerce has been a pain point at times for the retailer.

Michaels Chairman James Quella said of Buchanan, "Ashley is a world-class executive who has demonstrated the ability to redefine customer experiences and drive growth at the world's largest retailer, and we are confident that he will be successful in leading Michaels forward."

Buchanan didn't actually step into the CEO chair until April 1, following a three-month transition period, so he's inherited a challenge taking over the company in the middle of pandemic, but I suspect Buchanan will begin to implement some of his ideas as business returns to normal. Considering Michaels' prior challenges and its low valuation, investors will likely be responsive to any changes he makes and are eager to see what he does.

Like most retailers, Michaels is in a vulnerable position today with Americans under stay-at-home orders, unemployment soaring, and its stores closed in some states. Prior to the crisis, its financial performance was worsening, and the company has a heavy debt burden at $2.6 billion, meaning it could struggle to survive if profits disappear.

Michaels is definitely a risky stock right now, but the upside potential seems to outweigh the downside, considering its valuation, its product line that's aligned with social distancing, and the potential for a new CEO to help turn around the business. For risk-tolerant investors, it could pay off to scoop up some of this unloved stock while it's trading for just a few bucks.