Please ensure Javascript is enabled for purposes of website accessibility
Log In Help Join The Motley Fool
Free Article Join Over 1 Million Premium Members And Get More In-Depth Stock Guidance and Research
By Jeremy Bowman - Updated May 1, 2020 at 4:47PM

Coming into first-quarter earnings, investors knew that Facebook (META -0.76%) and Alphabet-owned (GOOG -0.27%) (GOOGL -0.21%) Google's advertising business would be slammed by the coronavirus pandemic. They just didn't know how much.

Now that those earnings reports have come in, we have a clearer picture of the impact of COVID-19, and it looks like Facebook has the early edge over its chief rival.

Comments on the earnings calls also indicate that Facebook's advertising business seems to be recovering faster than Google's. 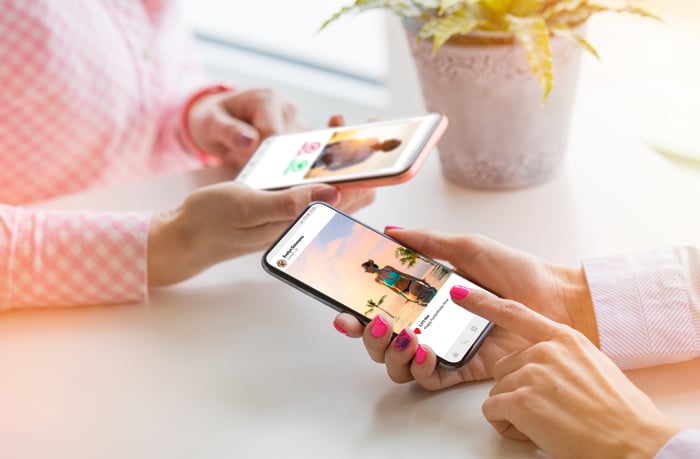 Facebook and Google both dominate digital advertising, but the companies approach the business from different angles. Facebook leverages its social network of 2.6 billion active users, which includes Instagram, WhatsApp, and Messenger, to connect businesses with users by splicing news feeds and "stories" with precisely targeted ad content. Google, on the other hand, as the world's biggest search engine, sells ads next to search queries. Here, the search engine does the targeting itself: Businesses advertise based on what a prospective customer is looking for.

Both channels have their strengths and weaknesses, and advertisers often advertise on both. As businesses, they function similarly with auction-based marketplaces based on cost-per-click or cost-per-impression rates.

However, in the current crisis, social-media-based advertising appears to have a clear advantage over search because ads on Facebook are interchangeable in a way that Google's are not. On its earnings call, Facebook COO Sheryl Sandberg explained that ad demand in verticals like auto and travel had plunged as consumer demand in those industries has collapsed from the pandemic. However, the ad spots that those companies would have taken went to brands in areas like gaming, tech, and e-commerce, which have performed well during the crisis, though at lower prices due to less-competitive auctions.

By contrast, Google can't substitute a search for travel with a search for a video game, and those lost travel searches represent lost revenue. Online travel agencies like Booking Holdings and Expedia, for example, spend billions on Google each year, but with the travel industry shut down, that spending is on pause. CFO Ruth Porat explained: "In March, revenues began to decline and ended the month at a mid-teens percentage decline in year-on-year revenues. Although user search activity increased, their interests shifted to less commercial topics." As searches moved to topics in health and news around COVID-19, they became more difficult to monetize. Facebook doesn't face the same conundrum.

The social network also experienced a sharp drop-off in sales in March, but management said ad sales were flat with a year ago through the first three weeks of April, indicating a rebound from March. Google CFO Porat sounded more cautious about the second quarter, saying, "Although we have seen some very early signs of recovery in commercial search behavior by users, it is not clear how durable or monetizable this behavior will be," and she said they expect the second quarter to be a difficult one for the advertising business. Relative to their usual growth, Facebook looks on track to outperform Google in the second quarter as well.

It's important to point out that Alphabet is more than just Google search. Though search generates a majority of its revenue, a number of other components play important roles in its business, including YouTube, Google Network Properties, Google Cloud, Google Play, hardware, and additional Other Bets like Waymo. Those businesses have been impacted differently by the pandemic. Growth in YouTube, for example, has actually accelerated modestly as usage has soared during the stay-at-home orders, and Google Cloud has performed well also. Its network business, on the other hand, where Google ads are displayed on partner sites, slowed substantially in March.

Both Google and Facebook essentially have monopolies in their respective arenas of digital advertising, and those competitive advantages should hold up over time, making both good long-term bets. However, the numbers above and management commentary show that Facebook's advertising business is more resilient during the current crisis than Google search, and that could give Facebook's stock, which also benefits from a growing network, a long-term edge over Alphabet.