Please ensure Javascript is enabled for purposes of website accessibility
Log In Help Join The Motley Fool
Free Article Join Over 1 Million Premium Members And Get More In-Depth Stock Guidance and Research
By Dan Caplinger – Apr 30, 2020 at 7:22AM

The yoga retailer has held up extremely well during the coronavirus crisis. Can the good times last?

The coronavirus pandemic has had a terrible impact on the retail industry, with most brick-and-mortar retailers having faced store closures as state and local governments imposed limits on nonessential business activity. However, the crisis has also highlighted which retailers have the most loyal customers, and lululemon athletica (LULU 0.14%) has held up much better than many of its peers due in large part to its core following of consumers eager to buy its yoga and athletic apparel and accessories.

Lululemon stock has seen significant turbulence during the crisis, but its share price has bounced back and is now up year to date in 2020. With such strong longer-term performance, the resilience of Lululemon's stock has made it an even more appealing investment than ever. Let's take a closer look at Lululemon to see why it's doing so well and whether investors should seriously consider buying the stock. 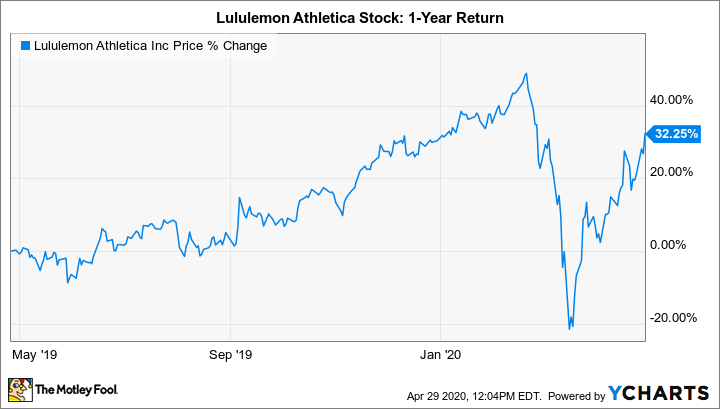 Lululemon's rise and fall -- and rise

Lululemon was one of the most impressive growth stories of the late 2000s and early 2010s. The company carved out its yoga apparel and accessories niche in putting together a premium product line, and it built a powerful brand that resonated well with its core customer base. Partnerships with yoga professionals also cemented Lululemon's position among its customers.

All that success took a hit, though, when the retailer faced controversy. Quality control issues surrounding its yoga pants caused Lululemon to face a crisis of confidence, as customers questioned whether the company's growth had caused it to lose sight of its core mission of serving consumers and justifying the high-end pricing that its products commanded. It took several years, but Lululemon managed to emerge from the yoga pants controversy and regain trust among its clientele. That prompted another huge rise in the stock price over the past few years, with particularly strong gains in 2018 and 2019.

Lululemon's fiscal fourth-quarter report came out at the end of March, but it only covered through the beginning of February. The retailer's holiday numbers were extremely good, with a 20% jump in sales stemming from 9% higher retail store sales and a 41% jump in direct-to-consumer revenue through its digital portals. Gross margin improved, helping to boost earnings.

The coronavirus forced Lululemon to shut down stores across the globe. Early on, closures in China reflected the progress of the disease there, while locations in Europe and the U.S. followed suit. Lululemon's Chinese stores are now back in business, but there's no telling when the rest of its global footprint will be able to join them in reopening their doors.

Can Lululemon outlast the pandemic?

Lululemon has a number of things in its favor to help it get through its current challenges. Its balance sheet is healthy, with no debt and more than $1 billion in cash. The company has handled its shift to online retail particularly well, and its customers have been loyal enough to stick with it even as their favorite store locations have closed.

Moreover, Lululemon is encouraging greater engagement with customers through digital classes. With a combination of specialties that include yoga, Pilates, dance, and meditation, Lululemon's online classes are keeping its current clients happy while also attracting new prospective customers who have time on their hands.

The big challenge for investors is that Lululemon's success commands a high valuation. Those following the stock expect earnings to dip this year before returning to growth next year, but even based on projections for fiscal 2022 net income, the stock trades at nearly 40 times forward earnings. That's not too much to pay for those who believe in Lululemon's long-term prospects, but it will limit the upside -- especially compared with those who managed to pick up shares of the retail stock  at levels 40% lower than current prices.