Please ensure Javascript is enabled for purposes of website accessibility
Log In Help Join The Motley Fool
Free Article Join Over 1 Million Premium Members And Get More In-Depth Stock Guidance and Research
By Evan Niu, CFA – Apr 30, 2020 at 9:00AM

People are staying at home more and using music to cope with stress caused by the novel coronavirus outbreak.

Like many other content-streaming service providers, Spotify (SPOT -6.78%) saw a spike in engagement related to the COVID-19 pandemic as people stay at home and governments around the world enforce various forms of lockdowns. The Swedish company reported first-quarter earnings results this week, and Spotify met or exceeded its internal expectations across numerous fronts despite the public health crisis.

Here's how the paid music-streaming leader did in the first quarter. 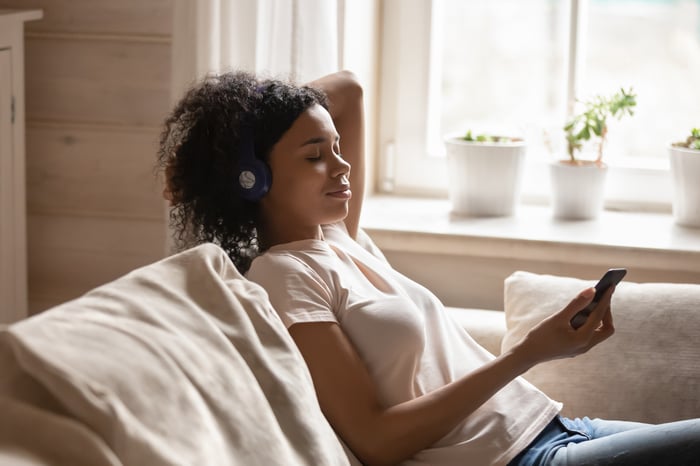 Revenue in the first quarter jumped 22% to 1.8 billion euros ($2 billion), driven by premium subscribers growing to 130 million. That's near the high end of Spotify's guidance, which had called for premium subscribers of 126 million to 131 million. Its Family Plan continues to drive subscriptions and Spotify continues to test its Premium Duo plan, which is designed for two people that live together and costs less than a Premium Family Plan.

The novel coronavirus outbreak has adversely impacted advertising budgets across the board, and Spotify was not immune. The good news is that ad revenue typically only represents about 10% of revenue and the core subscription business remains healthy. Ad-supported monthly active users (MAUs) grew to 163 million.

Spotify did note that countries that have been hit particularly hard by the coronavirus, like Italy and Spain, saw daily active users (DAUs) and consumption decline, but engagement has started to recover as those countries make progress combating COVID-19. Spotify has long partnered with an expansive stable of hardware makers to ensure ubiquitous access to its service, and that strategy is paying off: Usage has shifted from listening via mobile devices and cars toward connected devices at home like TVs or game consoles.

"It's clear from our data that morning routines have changed significantly," Spotify wrote in its shareholder letter. "Every day now looks like the weekend."

During these stressful times, people are listening to audio content as they do household activities and try to cope with the crisis. The company says it conducted a survey in the U.S. that showed 40% of consumers are listening to more music to manage stress. That includes an uptick in music genres that are calming, as well as podcasts that focus on wellness and meditation.

Gross margin similarly came in at the high end of guidance at 25.5%, which the company attributed to "the core royalty component due to product mix." That last bit suggests that the incremental shift toward podcast consumption is starting to help profitability, at least a little bit. Operating expenses increased by 16% but still came in below guidance because Spotify has slowed its hiring plans for 2020 due to macroeconomic uncertainty around COVID-19.

The public health crisis has not changed the company's long-term plan regarding podcasts. Spotify will continue investing heavily in producing original podcast content, although some productions have been delayed due to the coronavirus. Early data around podcast consumption remains highly encouraging, with consumption growing at "triple digit rates" and nearly 20% of MAUs listening to podcasts.

All told, Spotify squeezed out net income of 1 million euros ($1.1 million), or a net loss of 0.20 euros per share. Spotify's diluted net loss per share incorporates fair value losses on dilutive warrants, which is why net income was positive and diluted earnings per share was negative.

In terms of guidance, the company expects total premium subscribers to reach 133 million to 138 million in the second quarter, with MAUs of 289 million to 299 million. That should translate into total revenue of 1.75 billion euros to 1.95 billion euros ($2 billion at the midpoint).