Please ensure Javascript is enabled for purposes of website accessibility
Log In Help Join The Motley Fool
Free Article Join Over 1 Million Premium Members And Get More In-Depth Stock Guidance and Research
By Nicholas Rossolillo - Apr 30, 2020 at 11:45AM

Yum China is making moves in the coffee industry.

China is not a predominantly coffee-drinking nation, but that's changing quickly. Starbucks (SBUX 3.76%) has long been the leader on the front, drumming up interest in America's caffeine of choice with its premium menu. And up until a month ago, the train wreck that is now Luckin Coffee (LKNC.Y 2.93%) was very quickly filling in the gap as the daily drinker's coffee of choice. Perhaps too quickly. After saying it was doing an internal investigation into large fabricated transactions, the stock tanked in value by some 80% and is now in an extended trading halt.

Pending some clarity, suffice to say Luckin is worth putting on the back burner for now. But on the coffee front, investors often ignore China's largest restaurant operator, Yum China (YUMC 4.37%). The sole Chinese licensee of KFC, Pizza Hut, and Taco Bell from former parent company Yum! Brands (YUM 2.82%), Yum China has long been my biggest bet on the Chinese restaurant industry. In the aftermath of the Luckin scandal, the company is making moves to double down on its own coffee business.

Old brands with a new twist

To be fair, Yum China is not going to be the high-growth affair that Luckin promised to be. It's already a massive restaurant business with 9,295 stores across the country at the end of the first quarter of 2020. Of the total, 6,661 are KFC stores -- China's most popular fast-food chain.

But KFC in China is a bit different from what we Americans are accustomed to. One of the reasons why Yum China got spun off from Yum! Brands back in 2016 was to give the operator extra flexibility in adapting the menu to local tastes. One of the biggest differences with KFC China is its emphasis on different menu day parts -- most notably breakfast.

During its annual report last year, Yum China said that KFC sold 90 million cups of freshly ground coffee in 2018. That's not a particularly large number given how many stores and patrons it has, but as the vast majority of coffee consumed in China is instant, it does put KFC near the top of the list as far as largest fresh coffee makers go. The fast-food chain has been getting more aggressive in its promotion. Tapping the more than 250 million loyalty members KFC and Pizza Hut have, KFC launched a monthly coffee subscription in March, making its KCoffee available for one yuan ($0.14) a day.

Bringing the Italians to the coffee party

As an independent company, Yum China also has the flexibility to promote its own restaurants outside of the licensing deal with Yum! Brands for KFC, Pizza Hut, and Taco Bell. And to that end, it launched its own wholly owned COFFii & Joi coffee chain a couple of years ago and has grown it to 50 locations. As premium coffee grows in appeal, the company expects it will continue to expand its presence to go head-to-head with Starbucks. 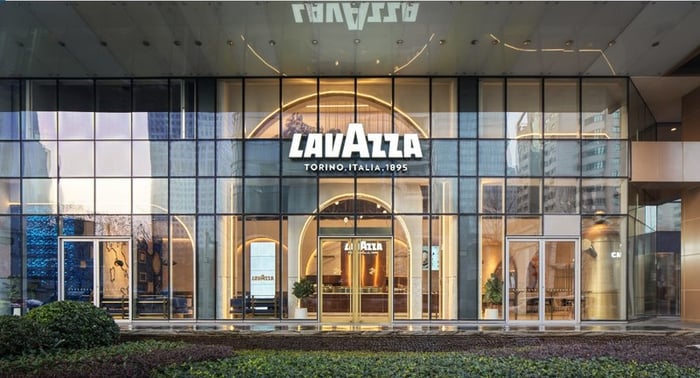 In tandem with first-quarter 2020 results, Yum China also had another new coffee announcement: It launched a joint venture with privately owned Italian coffee giant Lavazza. A flagship store was opened in Shanghai -- incidentally, the first one outside of Italy -- to test the waters. Besides the cafe, the store also "educates" visitors about Lavazza's 125-year history, coffee development, and cafe recipes. If successful, Yum China could now have multiple levers to pull to take on Starbucks and capitalize on the fast-growing coffee market in the Middle Kingdom.

Of course, KFC and Pizza Hut make up the bulk of sales, not coffee. So that will remain the primary driver of growth for this restaurant operator in the years ahead. Nevertheless, with Luckin's fate in question at the moment and Starbucks currently in the driver's seat on the premium end of the spectrum, Yum China is positioning itself as a future contender in the race to promote and scoop up share of the daily-drink coffee market. With multiple brands in its arsenal, its yet another reason I like this leader in the Chinese restaurant industry.