Remember all the money Olin made in Q1 last year? Well, it just lost twice that.

Shares of chemicals and ammunition specialist Olin (OLN -0.13%) dropped precipitously in early Thursday trading, and remain down 17.1% as of 11:35 a.m. EDT. Why?

For a change, this is not a story about the novel coronavirus -- or not entirely so. The industrial company's downfall, you see, was tied directly to the Q1 2020 earnings that it announced yesterday evening. Despite reporting better-than-predicted sales for the quarter ($1.42 billion, versus the $1.37 billion analysts had expected), Olin's loss was nearly twice as bad as analysts had expected -- $0.51 per diluted share. 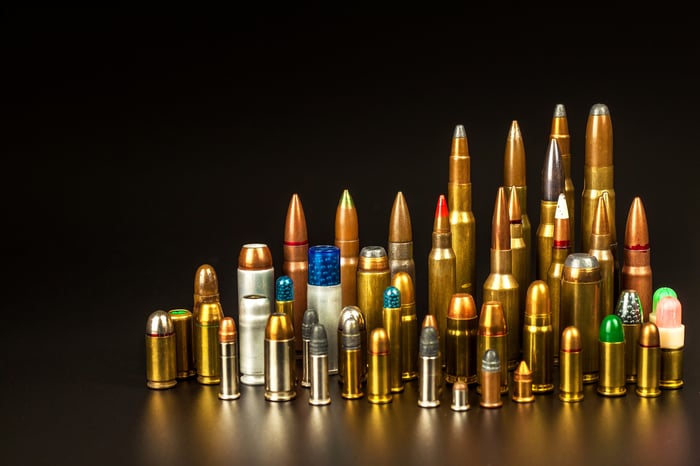 Olin ended up losing $0.51 per share in Q1, compared to a year-ago profit of $0.25 per share. Moreover, while the $1.42 billion in sales exceeded expectations, they nonetheless declined 7% year over year.

As far as the effects of COVID-19 went, they impacted various segments of Olin's business differently. On the one hand, stockpiling purchases by "preppers" was probably behind a big 20% jump in sales of Winchester ammunition. (Ammo purchases by military customers also helped.)

Epoxy sales, on the other hand, were hard hit -- down 9% -- due to lower prices and problems getting ahold of "precursors" needed to make the product, as some of Olin's suppliers were closed down by the virus.

Finally, chlor alkali products and vinyls -- Olin's biggest business and a segment you'd expect to benefit from increased demand for bleach during the novel coronavirus pandemic -- got hurt by a combination of weak pricing, planned downtime at its factories, and a rail transport strike in Canada. Sales fell 13% year over year.

Looking ahead, Olin did not give specific financial guidance for how the rest of this year might work out, but CEO John Fischer did note that "all Olin manufacturing facilities worldwide are currently operating, with the exception of those undergoing planned maintenance turnarounds."

Even so, analysts who follow the company predict another loss ($0.23 per share) in Q2, and even assuming things improve in the second half of the year, they're expecting Olin to end 2020 with a full-year loss of $0.35 per share.