Please ensure Javascript is enabled for purposes of website accessibility
Log In Help Join The Motley Fool
Free Article Join Over 1 Million Premium Members And Get More In-Depth Stock Guidance and Research
By Leo Sun – May 1, 2020 at 11:00AM

Hasbro's (HAS -2.02%) stock has stayed nearly flat over the past five years as the S&P rose nearly 40%. The toymaker was hit hard by the Toys R' Us bankruptcy in 2017 and 2018, and many of its aging brands have struggled to stay relevant. Rising tariffs on Chinese-made products and the COVID-19 pandemic exacerbated the pain.

Hasbro's recent first-quarter earnings report didn't bring back the bulls, either. Its revenue dropped 8% annually to $1.11 billion, missing estimates by $20 million. Its adjusted net income fell 26% to $78 million, or $0.57 per share, but beat expectations by a penny. 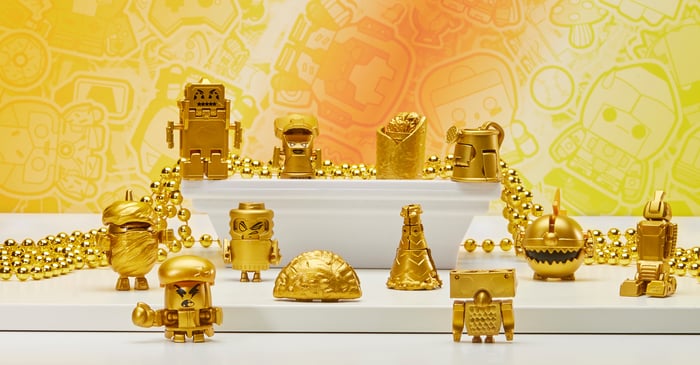 Hasbro also withdrew its full-year guidance in light of the COVID-19 crisis, and warned that the second quarter would "be more challenging," with declining revenue and earnings. Hasbro declared it was still "seeing healthy demand" for its products, but noted it would cut costs as it waited for stores to reopen.

Hasbro's lack of growth is disappointing, but past performance is never a good gauge of future growth. Therefore, let's look past Hasbro's near-term issues and see if the 96-year-old toymaker can bounce back over the next five years.

Hasbro splits its business into four main segments: U.S. and Canada (39% of its revenue last quarter), eOne (31%), international (23%), and entertainment, licensing, and digital (8%).

Hasbro acquired eOne, which owns Peppa Pig, PJ Masks, and Ricky Zoom, for $3.8 billion last December. Hasbro planned to integrate eOne's properties into its TV and film business, but those plans were postponed by the pandemic. Nonetheless, Hasbro claims the integration "remains on track to deliver planned synergies of $130 million by the end of 2022." Its top franchise brands include Monopoly and Magic: The Gathering, which are outpacing other franchises like Transformers, My Little Pony, Nerf, Play-Doh, and Baby Alive. Its partner brands include licensed products, primarily from Disney (DIS -3.03%), which often generate stronger revenue growth but require higher licensing fees.

Hasbro Gaming mainly develops video games based on its board games and franchises, and the TV, film, and entertainment unit licenses and co-produces content based on top franchises like Transformers, GI Joe, and My Little Pony. The emerging brands portfolio includes newer brands like its eOne franchises.

Can Hasbro overcome its main challenges?

ViacomCBS' (NASDAQ: VIAC) Paramount reportedly plans to expand the Transformers franchise with two different types of movies, and the Snake Eyes film could reboot the GI Joe series in the same way Bumblebee restarted the Transformers series. Hasbro also believes that Disney+ will buoy its sales of Disney-licensed toys, even as the pandemic postpones Disney's new theatrical releases.

Second, Hasbro is expanding Monopoly and Magic: The Gathering with new versions and new card sets, respectively, to lock in more shoppers and support the growth of their mobile games. Lastly, the integration of eOne's properties into its portfolio of toys, video content, and video games could diversify Hasbro's business beyond its core franchises and reduce its dependence on Disney's licensed products.

Hasbro is also expanding its e-commerce presence, which reduces its exposure to struggling brick-and-mortar retailers like Toys R' Us. Its three largest customers in the first quarter were notably three of the toughest retailers in the U.S.: Walmart, Target, and Amazon.

Hasbro ended last quarter with $1.2 billion in cash and $1.5 billion in its revolving credit facility, and won't face a major debt maturity (of $300 million) until next May. It already recently suspended its buyback plan to protect its dividend and debt payments.

Therefore, the COVID-19 crisis won't permanently damage Hasbro's business, and pent-up demand for new toys -- augmented by new movie releases -- could significantly boost its revenue after the pandemic passes. Hasbro's stock, which trades at just 16 times forward earnings with a 3.5% yield, could finally climb higher over the next five years if those tailwinds kick in.