Please ensure Javascript is enabled for purposes of website accessibility
Log In Help Join The Motley Fool
Free Article Join Over 1 Million Premium Members And Get More In-Depth Stock Guidance and Research
By Reuben Gregg Brewer – May 1, 2020 at 10:46AM

The timber REIT reported solid earnings, but the problem was its outlook for the future.

Shares of timber real estate investment trust (REIT) Weyerhaeuser (WY -1.43%) fell out of the gate on May 1, losing nearly 16% in the first 30 minutes of trading. The drop was all about the company's earnings, or, more to the point, what the company said about the future when it reported its earnings.

On the whole, Weyerhaeuser's top- and bottom-line results weren't bad at all. First-quarter 2020 revenues came in 5% above the same period in 2019. They also increased nearly 12% sequentially from the fourth quarter. Earnings came in at $0.20 per share, up from a loss of $0.39 in the year-ago period and a loss of $0.02 in the fourth quarter. Given that COVID-19 started to hit the U.S. economy late in the first quarter, Weyerhaeuser's CEO was probably justified in saying that he was "proud" of the numbers here. 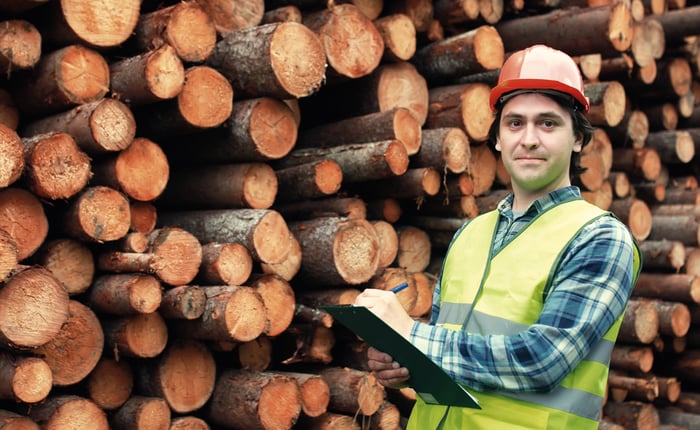 However, there was a lot of bad news for investors to digest, as well. For starters, the company noted that customer market conditions began to deteriorate late in the first quarter. Those negative trends have, so far, continued into the second quarter. Although it didn't provide specifics, Weyerhaeuser expects results from its second financial quarter to be materially weaker than first-quarter results. To weather the hit, the company has refinanced near-term debt and drawn on a credit facility. But the really big hit for income-oriented investors is that the board chose to suspend the dividend in order to preserve cash. Any company's cutting its dividend is unwelcome, but a REIT's doing so is particularly bad since the REIT structure was created specifically to pass income on to shareholders.

Timberland is a vital and renewable resource. Weyerhaeuser's long-term debt, meanwhile, is fairly reasonable at roughly 45% of its capital structure at the end of the first quarter. Its recent efforts to shore up its liquidity, meanwhile, have left it with roughly $1.5 billion in cash on its balance sheet. It looks as if the REIT can muddle through this difficult period. Which means that it will eventually live up to its promise that it is committed to returning value to shareholders via dividends. For now, however, investors are taking the news badly, suggesting that some income investors aren't willing to wait around on a promise that the dividend will eventually return.