Please ensure Javascript is enabled for purposes of website accessibility
Log In Help Join The Motley Fool
Free Article Join Over 1 Million Premium Members And Get More In-Depth Stock Guidance and Research
By David Haen – May 2, 2020 at 6:45AM

New clinical trial results may lead to a label expansion this quarter for Lynparza, and huge revenue growth for the drug.

Global pharmaceutical giant AstraZeneca (AZN 2.72%) heralded new overall survival data this week from a pivotal phase 3 clinical trial for patients with certain types of advanced-stage prostate cancer. Patients treated with the company's blockbuster drug Lynparza lived longer than those receiving the comparator drugs. The New England Journal of Medicine, one of the most prestigious medical journals, published the results on April 28.

The patients in the clinical trial had metastatic castration-resistant prostate cancer and had received prior treatment with either Xtandi from Pfizer (PFE 0.77%), Zytiga from Johnson & Johnson (JNJ 0.86%), or their generic equivalents. Trial participants also had to have specific genetic mutations. According to the American Cancer Society, prostate cancer, the second most common cancer among men, will kill more than 33,000 in the U.S. this year, and nearly 192,000 new U.S. cases are expected to be diagnosed. 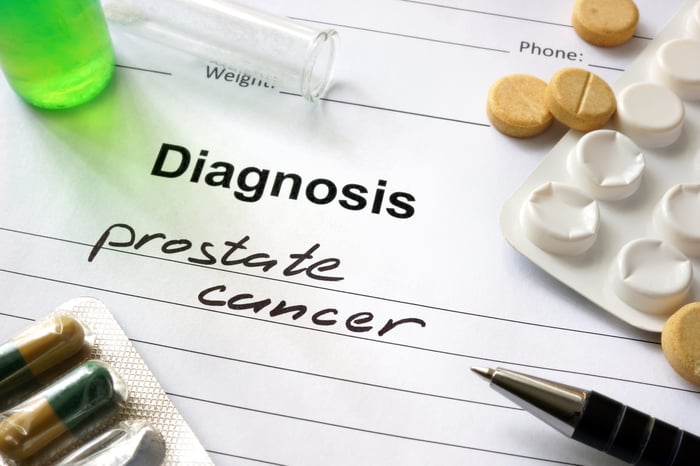 Here's what you need to know about the data

AstraZeneca released initial results from the trial last August. Those data showed Lynparza met the primary endpoint: improvement in radiographic progression-free survival (rPFS). That's simply a technical way of saying the trial used images from MRIs or other scans to determine how much time elapsed until the cancer began to grow again beyond a certain threshold. The median rPFS was 7.4 months for Lynparza treated subjects versus 3.6 months for the control arm.

While slowing or stopping the growth of a tumor is important, translating that into overall survival remains the bigger challenge -- and the most meaningful clinical endpoint. This latest data showed that Lynparza extended lives by an additional 3.4 months over the standard of care treatment -- 18.5 months versus 15.1 months -- in patients with advanced-stage prostate cancer.

Pharmaceutical sector investors should note that 81% of patients in the comparator arm crossed over to receive Lynparza. What does that mean, and is it significant? It means that patients in the control arm -- those receiving one of two standard-of-care drugs -- were allowed to switch to the investigational drug, Lynparza, after their original treatment was deemed no longer effective. Here's where it can get tricky. Let's say a patient crosses over, responds well to Lynparza, and ends up living longer than expected. For the statistical analysis, the patient will be counted as part of the control arm, which could improve that arm's overall survival number. It begs the question: If crossover was not allowed, would Lynparza have produced a greater than 3.4-month improvement in overall survival?

AstraZeneca is seeking an expansion of Lynparza's approval to include the types of prostate cancer treated in the study. This effort is well underway based on the data from last August. In January, the Food and Drug Administration granted a priority review for Lynparza in this indication with a Prescription Drug User Fee Act target date in the second quarter. This means investors could see an approval in the coming weeks. I expect AstraZeneca will seek to get the new overall survival data included in the final approved label. This will be a key selling point.

A new and significant indication will only allow AstraZeneca to generate more revenue with Lynparza. Last year, the drug generated $1.2 billion. For the first quarter of 2020, revenue from Lynparza came in at $397 million, a 13% increase over the prior quarter. Seeing the broad potential for the drug, AstraZeneca teamed up with Merck (MRK 1.09%) in 2017 to expand the development of Lynparza into 14 new indications, including multiple trials testing combinations of the companies' cancer drugs.

Johnson & Johnson's prostate cancer drug Zytiga hit $3.5 billion in sales in the year prior to generics entering the market. If Lynparza can outperform Zytiga, then expect it to grab a healthy market share. That could be another billion in sales in addition to the $1.2 billion it achieved last year. As attractive as Lynparza may be, it's only the third-highest revenue-producing cancer drug at AstraZeneca. That could change with an approval this quarter.