Cedar Fair (NYSE:FUN) stock has slumped since the onset of the COVID-19 pandemic. Investors are worried about the financial hit to the business from the closures that have kept its assets sitting idle since mid-March.

There are also big questions around the timing and scale of the rebound, as economic conditions might not support robust spending at parks. The virus might keep a lid on attendance over the next few quarters, too.

CEO Richard Zimmerman and his team won't have any special insight into when that recovery might happen, but they'll still have some important news for investors when they announce earnings results on Wednesday, May 6.

Let's take a look at what investors should expect. 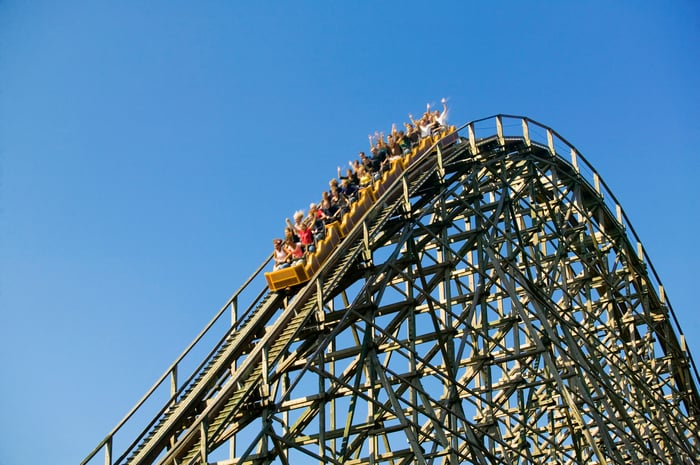 The fiscal first quarter runs through March 31, a period that includes social distancing mandates and park closures that started around March 12. The financial strain will be small, though, because Cedar Fair's parks are closed for most of this period anyway. The fiscal first quarter is usually just responsible for about 5% of annual sales, with much more revenue arriving in the summer and through early fall.

Still, it will be interesting to watch ticketing, food spending, and accommodation sales, which a year ago landed at $67 million overall. The company's preliminary estimates showed that figure dropping by about $10 million.

The short-term earnings outlook is far more negative, since the company likely took several one-time charges related to temporarily closing its parks. Cedar Fair will spell out those costs in detail on Wednesday.

Management should spend plenty of time discussing the company's cash position, which was recently bolstered by a new $1.1 billion loan the company took out on April 20. The cash and debt balance will show how much strain the business is likely to feel from a prolonged weak sales environment. It's also an important factor in Cedar Fair's dividend payment.

That distribution grew to $3.71 per share in 2019 from $3.60 per share a year earlier. Barring a far longer operating pause than is currently being considered, Cedar Fair isn't likely to end its 30-year streak of distribution payments. Yet the dividend has been paused, so it should fall significantly in 2020.

Executives recently told investors that the parks stand ready to reopen with just short notice, perhaps as early as mid-May in some cases. We'll find out this week whether that scenario still seems achievable.

Zimmerman and his team won't know specifics about the timing of state reopenings. But they'll have fresh data on things like season pass sales, which might point to a quick reboot ahead if they continue to trend 20% higher, as they did through late March.

Looking further out, Cedar Fair might be focused on balancing cash preservation with being ready to move quickly when it's safe again to operate its parks. Yet the biggest question is how far annual attendance will drop in 2020 after having risen in each of the last 10 years.