Please ensure Javascript is enabled for purposes of website accessibility
Log In Help Join The Motley Fool
Free Article Join Over 1 Million Premium Members And Get More In-Depth Stock Guidance and Research
By Danny Vena – May 3, 2020 at 9:00AM

To see proof that the e-commerce platform provider is becoming even stickier and more popular, look to its package-tracking app.

One of the most profound shifts in consumer behavior resulting from the COVID-19 pandemic has involved e-commerce. With widespread stay-at-home orders in place, and people going to stores only when absolutely necessary, many are shopping online for the very first time, or using digital ordering at businesses they previously only patronized in person.

That consumers are flocking to digital shopping in unprecedented numbers can be confirmed with just a glance at recent headlines. Amazon (AMZN -0.54%) has gone on a massive hiring spree just so it can keep up with demand, and Shopify (SHOP -2.50%) revealed it's experiencing Black Friday-level traffic every day.

But to understand just how much Shopify is benefiting from these changes in behavior, investors should look at one particular under-the-radar statistic.

Since the onset of the pandemic, there's been a surge of downloads for package-tracking and delivery apps, according to recent data released by market intelligence company Apptopia. Those include apps from top delivery providers like FedEx (FDX -1.07%), United Parcel Service (UPS -1.39%), DHL, and the U.S. Postal Service. Among these biggest names, the most notable increase came from the USPS, which saw the highest number of daily downloads in its history during the month of April. 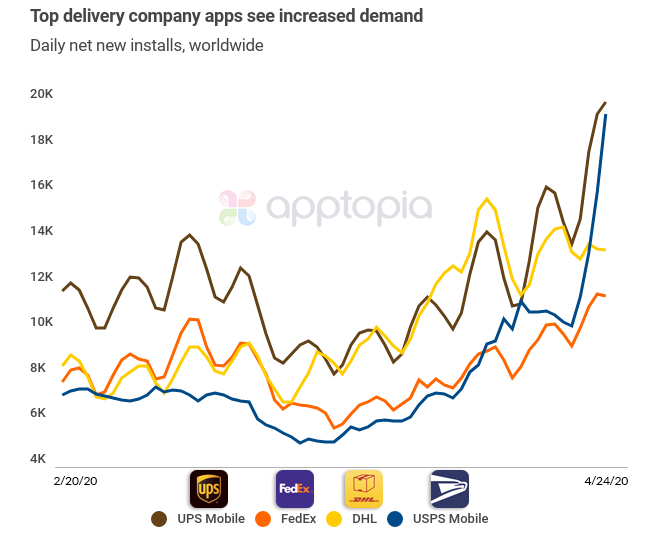 It also includes package tracking apps like Afterhip Package Tracker, Parcels Track Your Packages, 17Track, ParcelTrack Package Tracker, and Parcel Delivery Tracking. While each of these has experienced significant growth in downloads over the past two months, one app is not only beating them all, but doing so by a wide margin -- Arrive, a product owned by Shopify. While the others have had notable increases, the Arrive app has seen downloads skyrocket, nearly double their level from mid-February. 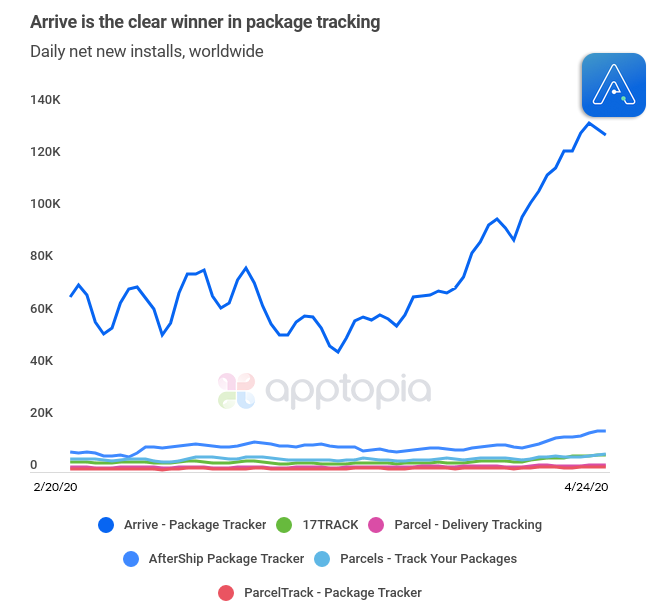 The best just got better

This data was revealed just as Shopify was announcing a broad expansion of the capabilities of the Arrive app and its rebranding to simply "Shop". The revamped app added features that help businesses connect with shoppers, including filters to help customers find local merchants. It also provides users with information that's increasingly important to consumers in our stay-at-home world, including shopping hours, pick-up and delivery options, and return policies.

In addition to merchant information, the Shop app gives users customized product recommendations and special offers based on their shopping history. Once a buyer has made a selection, the app provides a fast and easy checkout option with Shop Pay. It then provides real-time order and tracking updates, with information about each package aggregated in one place in the Shop app.

There's been an unprecedented acceleration in the adoption of e-commerce in recent months and Shopify has been one of the undeniable beneficiaries. In a mid-April tweet, Shopify Chief Technology Officer Jean-Michel Lemieux said, "Our platform is now handling Black Friday level traffic every day! It won't be long before traffic has doubled or more."

By appealing to customers and better connecting them with merchants, Shopify is increasing the stickiness of its e-commerce ecosystem, not only for the vendors that sell on its platform, but the customers that shop there. Shopify said that more than 16 million consumers had already used Arrive. The recent revamp and rebranding of the app ups the ante, and makes this industry-leading growth stock even better.