Please ensure Javascript is enabled for purposes of website accessibility
Log In Help Join The Motley Fool
Free Article Join Over 1 Million Premium Members And Get More In-Depth Stock Guidance and Research
By John Ballard – May 3, 2020 at 11:30AM

Expectations are high for Wayfair after it reported an acceleration in revenue growth during the COVID-19 outbreak.

Investors have been high on Wayfair (W -8.74%) following a positive COVID-19 business update in early April that revealed an acceleration in sales toward the end of March. The stock has rebounded strongly to as high as roughly $132 after falling to around $23 in March.

Considering the drastic change in expectations for the largest online home goods retailer, here are two things I'll be watching when Wayfair reports earnings next week. 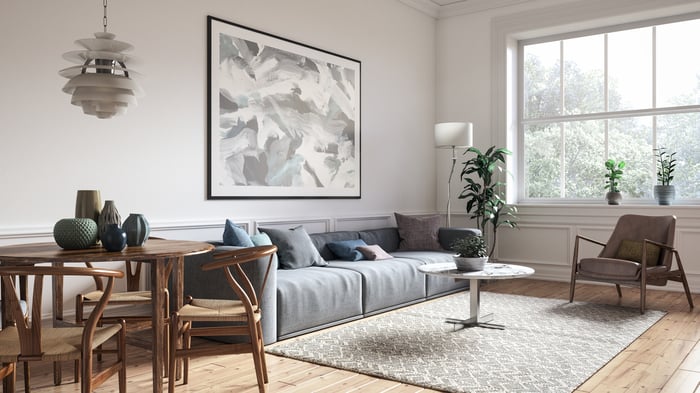 Before the business update in early April, investors were expecting near-term results to be weak. Management's first-quarter outlook called for revenue growth of 15% to 17% year over year. That shows a significant deceleration over the year-ago quarter, when Wayfair reported revenue growth of 38.5%.

However, the closure of retail doors across the country led to a surprising boost in sales during March. In its COVID-19 business update issued on April 6, Wayfair stated that it "continues to see strong demand across most home goods categories in both its U.S. and international segments."

Wayfair entered the month of March with gross revenue growth clocking in above guidance at nearly 20% year over year, which was also consistent with trends in January and February. But with more people staying home, Wayfair said it saw growth more than double toward the end of March, which carried over to the first week of April. That would suggest a growth rate of around 40% year over year, which is consistent with the level of growth it experienced through 2018.

One thing investors will be eager to know is whether management is seeing the late March surge continuing through the end of April and into May. If so, that could cause a renewed level of positive sentiment to surround the stock through the rest of 2020.

Advertising expense and the impact on the bottom line

Spending big sums on marketing is a key growth strategy for the company. Wayfair seeks to not only drive repeat purchases from its 20 million active customers, but also attract new customers.

Wayfair has typically spent more than 10% of its annual revenue on marketing. The company uses bidding algorithms to buy ads to drive traffic while maintaining a strong return on each new customer obtained. Historically, this has worked out well, with active customers climbing from 2.4 million in early 2014 to 20.3 million in the fourth quarter of 2019, while direct retail net revenue per active customer has increased from $323 to $448.

Wayfair wants its customer base to remain loyal and make repeat purchases over time, as that helps drive down marketing costs relative to the lifetime value of each customer, and therefore should lead to improving profitability over the long term.

But during the fourth-quarter conference call, management announced that it wanted to accelerate its plan to reach profitability on an adjusted EBITDA (earnings before interest, taxes, depreciation, and amortization) basis, as well as free cash flow.

To do this, the company is pulling back on its ad spending in the short term and slowing down the rate of hiring new employees that are filling marketing roles. This contributed to the lower revenue outlook for the first quarter provided during Wayfair's last conference call in late February.

However, the surge in demand in March could lead to better-than-expected earnings for the first quarter, especially if the demand came without any increase in marketing expense. In its business update, Wayfair stated that it expects to meet or exceed its adjusted EBITDA margin guidance for "a negative 7.3% to 7.8% range."

Additionally, the company said it was "accelerating its efforts to drive toward non-GAAP adjusted EBITDA profitability and materially improve its cash flow profile in 2020."

What to hope for from Wayfair

A combination of an acceleration in revenue growth along with better-than-expected earnings would be welcome news to investors, especially given the skepticism some analysts have had about Wayfair's willingness to spend big sums on marketing without showing a profit on the bottom line.

Overall, investors want to see the company maintain a strong growth rate, as that would validate its competitive strength going against big box retailers that sell home goods.