Please ensure Javascript is enabled for purposes of website accessibility
Log In Help Join The Motley Fool
Free Article Join Over 1 Million Premium Members And Get More In-Depth Stock Guidance and Research
By Keith Speights – May 3, 2020 at 7:31AM

They're two of the legendary investor's favorite stocks.

I bought several stocks in both March and April. The stock market meltdown presented too tempting of an opportunity to invest in great companies at attractive prices. Even as the market rebounded, I still saw plenty of stocks that I liked.

Two stocks that I bought in April were the kinds of stocks that Warren Buffett would love. Actually, they're stocks that he already loves. Here are those two Buffett stocks that I added to my portfolio last month -- and why I plan to scoop even more shares in May. 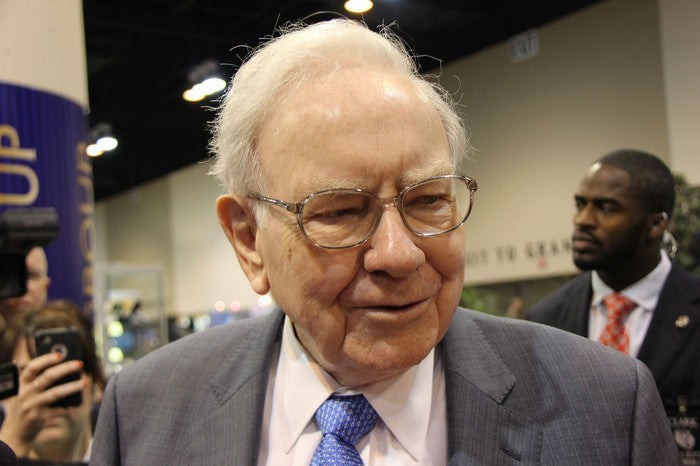 1. The biggest Buffett stock of all

There was one Warren Buffett stock that I absolutely, positively had to buy last month. It's the biggest Buffett stock of all -- Berkshire Hathaway (BRK.A -0.83%) (BRK.B -0.40%). Just to set the record straight, I purchased Berkshire's class B shares. They're a tad bit more affordable than the class A stock, which currently has a price tag of a cool $274,000 per share.

For much of his career, Warren Buffett was known as a value investor. He studied under Benjamin Graham, who wrote the classic value investing book The Intelligent Investor. While Buffett isn't as value-oriented as he used to be, he still believes in making sure he gets a good deal with any stock he buys. My top reason for buying Berkshire Hathaway shares in April was that I felt that the stock offered a compellingly attractive valuation.

Ben Graham was a big fan of looking at a company's book value to determine if its shares were worth buying. Evaluating book values isn't as fashionable these days but it still deserves consideration, in my view. Berkshire trades at just a little over its book value. What's more, the stock was and still is well below its levels in 2019 when Berkshire was spending billions of dollars to buy back its shares.

You'd nearly run out of fingers counting the number of bank stocks in Berkshire's investment portfolio. Warren Buffett really likes banks. And there's one bank that stands as his No. 1 pick -- Bank of America (BAC -1.42%).

Berkshire owns more shares of Bank of America than it does of any other bank. Bank of America is the holding company's second-biggest position overall, trailing only Apple. However, I didn't buy Bank of America shares merely because Buffett likes the stock.

Valuation was yet again my top criterion. Bank of America shares trade below book value. The stock is still close to 35% below its highs from earlier this year and was even cheaper when I bought it last month.

Granted, all banks will likely face significant challenges throughout the rest of this year. The response to the COVID-19 pandemic has led to a huge spike in unemployment and caused some businesses to close or be at the brink of doing so. This could lead to a higher default rate for banks. Super-low interest rates also don't help matters.

However, my view is that Bank of America is one of the strongest major banks around. It boasts a solid balance sheet. The company isn't laying off any staff and even hired 2,000 new people in March. I look for Bank of America to thrive once the healthcare crisis and its aftermath are in the rearview mirror.

While I staked out initial positions in Berkshire Hathaway and Bank of America in April, I play to buy more shares of both companies in May and in future months as well. My strategy is to buy incremental stakes rather than fully invest in one fell swoop.

This approach reflects my acknowledgment that I don't know what's going to happen with the economy or the stock market. The nice rebound we're seeing now could continue. However, we could also experience another market downturn. I'm confident, though, that Berkshire and Bank of America will deliver market-beating returns over the long run.