Please ensure Javascript is enabled for purposes of website accessibility
Log In Help Join The Motley Fool
Free Article Join Over 1 Million Premium Members And Get More In-Depth Stock Guidance and Research
By Billy Duberstein – May 3, 2020 at 8:10AM

The troubled retailer got a boost from stay-at-home orders and activist investors.

Shares of video game retailer GameStop (GME 1.38%) rose a whopping 63.7% in April, according to data from S&P Global Market Intelligence. Like most other stocks, GameStop was hit terribly hard in March as COVID-19 swept across the world, so it experienced a bit of a bounceback in April. However, the bounceback was much more pronounced than for other stocks.

In fact, GameStop experienced several notable events during April that gave it even more of a turbocharge, even though it didn't have an earnings release. Here's what happened. 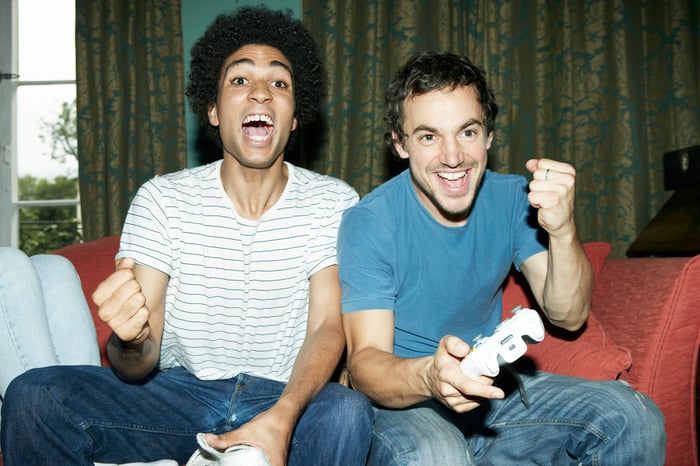 On April 21, the company gave a sales update describing sales trends in March and into April, when many of GameStop's U.S. stores were ordered to temporarily shut down.

While the shutdowns caused GameStop's sales to plummet, the company also reported strong results during time periods and in geographies in which stores remained open. For the three weeks ended March 21, GameStop actually reported a 3% increase in same-store-sales, despite new PlayStation and Xbox console cycles to be released later this year. The positive results pre-shutdown was due to a surge in demand as people prepared to stay at home for an extended period.

However, for the nine week period ended April 4, comparable sales were down 23%, because the company fully closed down one-third of its U.S. stores, with the remaining two-thirds open for curbside pickup. The company then released a new plan to preserve cash, with CEO George Sherman and the company's directors all taking 50% haircuts in cash compensation. These better-than-feared results and cost-saving measures were perhaps somewhat encouraging to shareholders.

In addition to the business update, several prominent U.S. investors are circling GameStop's stock, which, for all its problems, is still very cheap. Prominent investor Michael Burry, who was featured in the book The Big Short after calling the 2008 financial crisis, increased his holdings in GameStop during February, March, and early April, to 5.3% of all shares outstanding.

In addition, two hedge funds, Hestia Capital Partners and Permit Capital Enterprise Fund, which own a combined 7.6% of GameStop, launched a proxy contest toward the end of the month, in an attempt to get more shareholder representation on the board of directors. The investors are putting two of its representatives up for election at the company's upcoming annual meeting in June.

Investors always like to see activist shareholders shaking up the business of an undervalued stock. As such, optimism on potential shareholder-friendly changes sent shares up further.

The annual shareholders meeting is set for June 12, 2020, which will determine whether or not Hestia and Permit get seats on GameStop's board. At the end of the quarter ended February 1, GameStop had $500 million in cash against just $420 million in debt. At the time of the update in April, GameStop reiterated that it had $772 million in total liquidity, though that also includes the company's revolver. Should GameStop maintain a decent balance sheet until new consoles are released at the holidays, its stock could perk up even more.

GameStop has been a troubled stock over the past few years as consumers gravitate more toward online streaming options in the video gaming space and away from physical games. However, it also has a few positives going for it. These include its balance sheet, which is strong, and the company's ample share repurchases, which have reduced shares outstanding by nearly 40% in just a year. Now, with large stockholders advocating for more change at the company, another potential positive is in the cards.

The dire secular and pandemic-related headwinds running into a strong balance sheet and shareholder activism means GameStop could either go to zero or experience significant gains, even beyond April's 64% surge. It therefore remains one of the most interesting turnaround stories to track in the entire market.