Please ensure Javascript is enabled for purposes of website accessibility
Log In Help Join The Motley Fool
Free Article Join Over 1 Million Premium Members And Get More In-Depth Stock Guidance and Research
By Lee Samaha - May 3, 2020 at 3:35PM

The paint and coatings company is one of the few companies that actually saw a boost to some of its sales from the COVID-19 pandemic.

Shares in paint and coatings company Sherwin-Williams (SHW 0.82%) rose 16.7% in April, according to data from S&P Global Market Intelligence. The move comes in line with an overall improvement in market sentiment -- the S&P 500 index rose nearly 13% over the same period. However, there are a few reasons Sherwin-Williams did well and also outperformed peers such as PPG (PPG 0.44%) and Axalta Coating Systems (AXTA 0.59%). 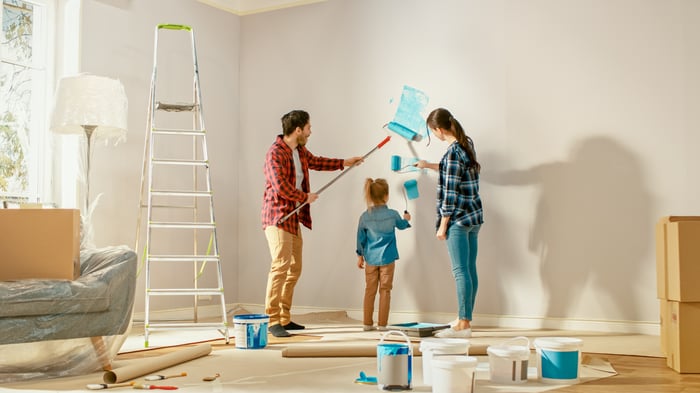 Indeed, these points were highlighted in the recent first-quarter earnings presentations. For example, according to the earnings release, "strong architectural paint volumes across all end markets" helped offset declines elsewhere and led to 2.6% year-over-year sales increase in the first quarter.

Meanwhile, on the earnings call, Sherwin-Williams' senior VP of investor relations, Jim Jaye, said this with regard to costs: "[W]e do expect to realize lower year-over-year raw material costs throughout the remainder of 2020. The full year will be down by low single-digit percentage, as we talked about, compared to our prior estimate of being flat for the year."

Obviously, the boost from stay-at-home measures can't be expected to remain over the long term. On the other hand, it highlights the fact that the majority of paint demand actually goes to the repaint and remodel market -- only 6% of U.S. architectural paint demand comes from new non-residential construction and 12% from new residential demand. In other words, there will still be a good level of underlying demand for paint even in a slowdown.

That said, an industrial slowdown will certainly hurt coatings sales at Sherwin-Williams, and the housing repaint/remodel market is still somewhat dependent on movements in housing prices and employment. As such, it's hard to argue that Sherwin-Williams isn't a company whose fortunes are still tied to the economy.

Given a scenario where the housing market remains buoyant and a gradual economic recovery takes place, and the price of oil remains relatively low, then Sherwin-Williams is situated to do well. However, the company won't be spared in the event of a protracted slowdown in economic growth. Time will tell which outcome is the more likely.