Please ensure Javascript is enabled for purposes of website accessibility
Log In Help Join The Motley Fool
Free Article Join Over 1 Million Premium Members And Get More In-Depth Stock Guidance and Research
By Adria Cimino - May 3, 2020 at 12:39PM

The effect of the coronavirus crisis on Starbucks’ biggest market isn’t over.

Starbucks (SBUX -0.83%) reported a 5% decline in fiscal 2020 second-quarter revenue and a 47% drop in earnings per share due to the coronavirus outbreak. But things are going to get even worse in the near term. The coffee chain said that's because most of the coronavirus effect in the U.S. -- Starbucks' biggest market -- happened and is happening in the third quarter of its fiscal year.

During the company's earnings call last week, management said that while coronavirus hurt its U.S. business for the last two or three weeks of the second quarter, it will hurt all 13 weeks in the third quarter. As a result, the effect on revenue and operating income will be "much more substantial" in the third quarter, according to chief financial officer Patrick Grismer. 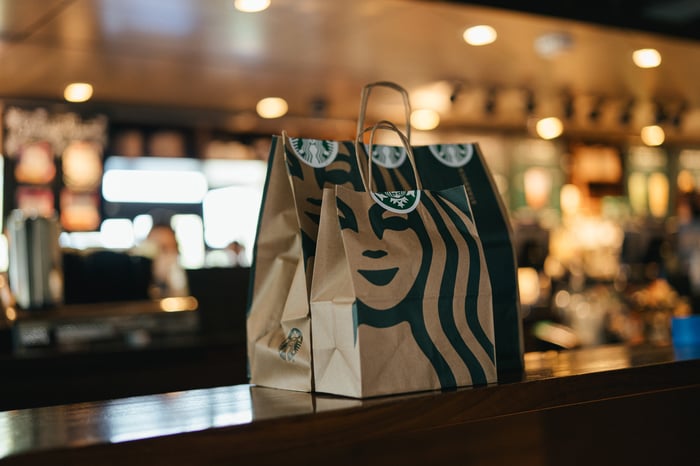 Too early for guidance

Starbucks said that it's too early to offer guidance for the third quarter and the full year, as the depth of the effects on the U.S. business hasn't yet been determined.

Starbucks initially dealt with the coronavirus crisis in China, its second-biggest and fastest-growing market. There, in the second quarter, comparable store sales plunged by 50%, causing revenue to fall by $325 million. The coffee chain said a recovery is under way in China, and it expects same-store sales in China to decline 25% to 35% in the third quarter and decline 0% to 10% in the fourth quarter. That implies a full-year same-store sales decline of 15% to 25% there.

It's impossible to predict whether the sales performance in the U.S. will be better or worse than that of China in the coming quarters. However, Starbucks said it learned from the shutdowns in China and was using that knowledge to address the crisis in its other locations. More than half of Starbucks' stores in China were closed as of Jan. 28, with closures peaking at about 80%. By early March, more than 90% of the company's stores in China had reopened.

Starbucks never completely halted operations in North America. In late March, the retailer moved to a to-go model. Soon thereafter, it shifted to drive-thru-only service where possible in the U.S. and Canada, while temporarily closing its cafes. At the moment, about 50% of company-operated shops in the U.S. and more than 75% of those in Canada, Japan, and the U.K. remain closed.

The company expects the situation to improve in May as more stores reopen. It will begin that process in the coming week and aims to reopen 90% of company-operated stores by early June.

Maintaining drive-thru operations during the crisis helped Starbucks' U.S. revenue to a certain degree these past few weeks. Even better, it laid the groundwork for the reopening stage, which clearly will involve a lot of drive-thru, takeout, and contactless orders.

Starbucks shares have slipped 16% so far this year. That puts them 25% below their all-time high of more than $99 reached last year. And trading at about 26 times trailing 12-month earnings, the shares are cheaper than they were last year by that measure.

Starbucks has reported annual revenue growth for the past decade, and this past holiday season was one of the company's strongest ever. We should expect significant revenue declines in the near term, but once the coronavirus impact is fully felt in Starbucks' earnings reports, recovery won't be too far off.

I'll grin and bear it when Starbucks reports weak third-quarter and maybe even fourth-quarter earnings. That's because I'm confident the measures the company has taken to manage the crisis, along with its pre-crisis strength, will eventually outweigh this year's problems.