Please ensure Javascript is enabled for purposes of website accessibility
Log In Help Join The Motley Fool
Free Article Join Over 1 Million Premium Members And Get More In-Depth Stock Guidance and Research
By Keith Noonan – May 3, 2020 at 11:19AM

The enterprise software stock has fallen roughly 26% over the last year, while the S&P 500 index is down 3% over the same stretch.

Shares of Workday (WDAY -0.83%) climbed 18.2% in April, according to data from S&P Global Market Intelligence. The cloud-based enterprise software company's stock saw significant recovery in the month after falling 24.8% in March's trading. 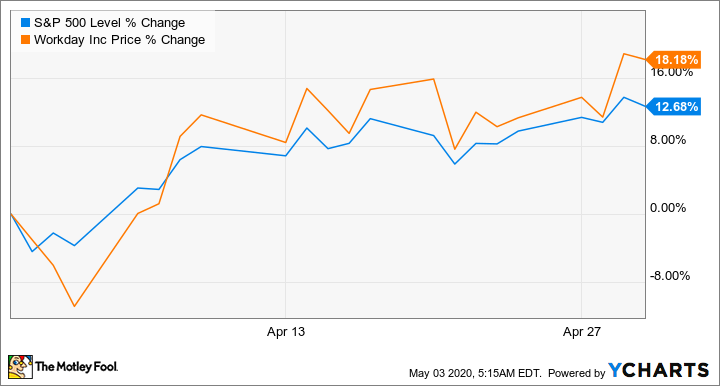 Workday stock climbed in conjunction with momentum for the broader market in April. The enterprise software provider's share price may also have gotten a boost after the company secured a new loan and received favorable coverage from analysts.

Workday published a filing with the SEC on April 6, reporting that the company had entered into an agreement on April 2 to secure a principal long-term loan in the amount $750 million and a $750 million revolving credit facility. The terms of the agreement state that the revolving loan may be borrowed, repaid, and reborrowed until April 2, 2025.

However, positive coverage wasn't unanimous at major firms last month. Cowen analyst J. Derrick Wood cut his rating on the stock from "outperform" to "market perform" in a note published April 24, citing the possibility that economic uncertainty and businesses making budget cuts in response to the novel coronavirus pandemic could translate to reduced sales momentum for the enterprise software company.

When Workday reported its fourth quarter results on Feb. 27, it laid out a target for first quarter subscription revenue between $873 million and $875 million -- representing 24.7% year-over-year growth at the midpoint of the target. The company also guided for full-year subscription revenue between $3.755 billion and $3.77 billion -- up 21.4% year over year at the midpoint.

Management stated on the company's fourth quarter conference call that it had not seen any impact on its business stemming from the novel coronavirus, but the situation may have changed since those comments were made at the end of February. The company has yet to issue any statements amending its targets in response to the novel coronavirus pandemic.