Please ensure Javascript is enabled for purposes of website accessibility
Log In Help Join The Motley Fool
Free Article Join Over 1 Million Premium Members And Get More In-Depth Stock Guidance and Research
By Anne Burdakin - May 3, 2020 at 10:35AM

Opportunity and consumer behavior are the keys to this growth story.

The so-called "treasure hunt shopping experience" isn't for everyone, but some people love it. Ollie's Bargain Outlet (OLLI 0.91%) bills itself as an "extreme value retailer of brand name merchandise at drastically reduced prices."

And Ollie's is one of the largest retailers of closeout merchandise and excess inventory. The chain operates 361 stores in 25 states, located largely in the eastern half of the U.S. It's a similar business model to TJX Companies but without the polish. To illustrate, Ollie's describes its stores as "semi-lovely" as the ambiance is pretty basic, but the deals are great. Dedicated Ollie's shoppers seem happy to make the trade-off.

The unique brand clearly resonates with customers. The company's loyalty program, Ollie's Army, has more than nine million members, and Ollie's Army is indeed loyal, making up about 70% of Ollie's business.

Now, in an almost perfect storm of circumstances, both supply and demand are likely to increase rapidly for Ollie's Bargain Outlet as the coronavirus crisis takes its toll. 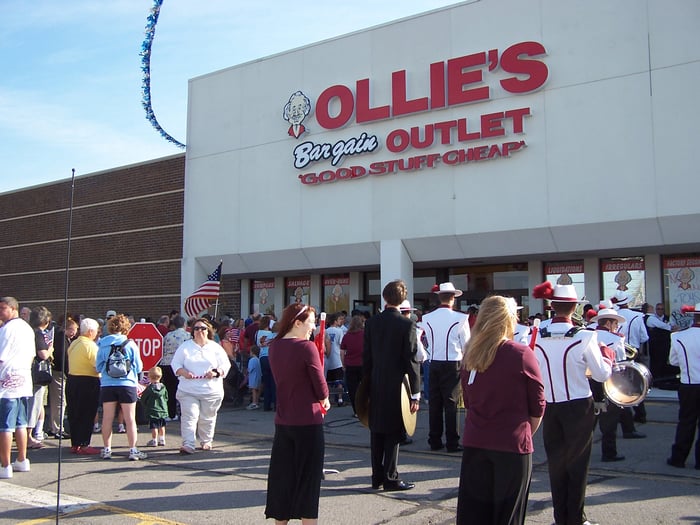 Coronavirus turned retail into "survival of the fittest"

Excess inventory abounds for stores unable to open during the COVID-19 outbreak. Ollie's will be able to acquire quality merchandise for a song, then still sell it at bargain prices while earning a nice profit.

With unemployment hitting many Americans, demand at Ollie's should jump as consumers try to make the most of their budgets. The late Mark Butler, co-founder and former CEO, said demand increased due to a "trade-down effect" after the 2008 financial crisis. He added that it was a time "where people really needed to save money, and they liked it."

Ollie's has demonstrated a remarkable ability to successfully enter new markets and build market share too. The company, which had been planning to increase the total number of stores to 950 long term, updated that number on March 19, when full-year fiscal 2019 results were announced.

Chief Executive Officer John Swygert said: "New stores are the primary driver of our growth, and I'm pleased to report that we are increasing the number of stores we believe we can support on a national scale to 1,050."

Financially disciplined, Ollie's has a strong base

But both revenue and adjusted net income actually came in below management's original guidance. However, investors shook off any disappointment when management explained that toy inventories were too high in the crucial fourth quarter, in a year with six fewer days than usual in the core holiday shopping season. Regarding weak comparable sales, CEO Swygert said:

Following a very strong toy season last year, we leaned into this category at the expense of other departments. Had we been more balanced in our merchandise assortment and had a longer holiday selling season, we believe it would have delivered a better comp.

And for the current year, CFO Jay Stasz said during the earnings call:

While under review, our current plans for 2020 include the following: the opening of 47 to 49 new stores with one planned closure; a more normalized store opening cadence with an approximate 50-50 split between first and second half openings, and capital expenditures of $30 to $35 million, primarily for new stores, IT projects, and store-level initiatives.

Since releasing its 2019 year-end report, the company has seen its shares surge over 75%. With no debt, Ollie's Bargain Outlet really is well-positioned to get through this challenging time. The company had $90 million of cash at the end of fiscal 2019 with another $100 million available through its revolving credit facility. However, management chose not to issue fiscal 2020 earnings guidance, due to uncertainty associated with the coronavirus outbreak.

The global pandemic's affect on retail is a concern, and CFO Stasz drew a parallel to another time of stress. He said that during the financial crisis in 2008, cash-strapped customers started giving Ollie's a chance. That year, the company had delivered flat comparable-sales growth, but many of those customers became regulars. The following year, comps were up 7.9%.

Once the pandemic is behind us and things return to normal, management expects customers will stay with Ollie's, and that comps will return to the long-term target of 1% to 2% annual growth.

Fill your basket with shares and check out now

Ollie's Bargain Outlet has some busy times ahead. The confluence of the pandemic and economic uncertainty is leading the company to cheap, quality inventory (funded by strong liquidity) and healthy demand from an expanding customer base hungry for a bargain.

The company's stock price is down over 30% from this time last year, giving it a price-to-earnings-growth (PEG) ratio of 1.24, which seems modest considering all the tailwinds coming together for this company. Ollie's Bargain Outlet should turn out to be one of the most resilient retailers during this crisis, and investing at current levels is a real opportunity for both near-term and long-term gains.