Please ensure Javascript is enabled for purposes of website accessibility
Log In Help Join The Motley Fool
Free Article Join Over 1 Million Premium Members And Get More In-Depth Stock Guidance and Research
By Adria Cimino – May 4, 2020 at 10:38AM

A delay in the regulatory submission of Alzheimer’s drug aducanumab weighed on the shares.

Biogen (BIIB -2.15%) shares fell 6.18% in April, according to data provided by S&P Global Market Intelligence, as the biotech company said it would submit a key drug to the U.S. Food and Drug Administration later than expected. 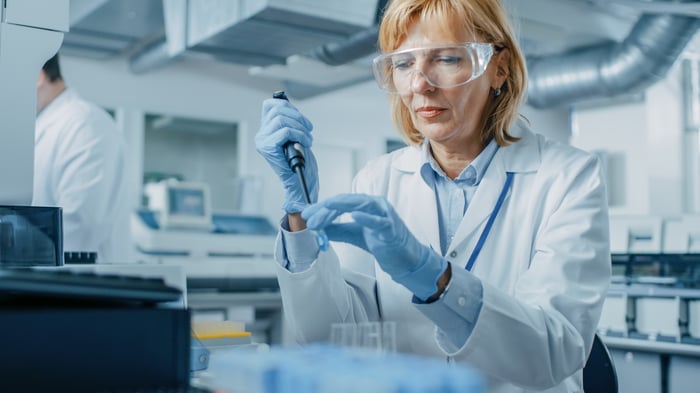 As part of an update in its earnings report, Biogen said it would complete the regulatory filing of its investigational Alzheimer's drug, aducanumab, in the third quarter after meetings with the FDA. The company had originally said it would file for U.S. regulatory approval in early 2020. Also, before the recent earnings call, some analysts thought the next step would be completing the filing and that there wouldn't be a need for further meetings with the regulatory agency.

Prior to the April 22 announcement, Biogen's shares had been following the rest of the market higher. The S&P 500 index rebounded 13% in April after entering a bear market a month earlier.

Aducanumab has pretty much driven Biogen share price over the past year. The stock dropped 34% in a matter of days after Biogen halted the program last March, saying the treatment didn't work. In October the shares rebounded 26% in one trading session after Biogen said a broader study showed just the opposite and decided to submit the drug for regulatory approval. Data from that study showed a wider set of patients who had access to a higher dose of the product. Higher doses reduced clinical decline, the company said.

Why is aducanumab such a significant drug for Biogen? Because there currently isn't an FDA-approved treatment that reduces clinical decline in Alzheimer's disease, which affects 5.8 million Americans. According to Zion Market Research, the global Alzheimer's drug market is expected to generate revenue of $5.7 billion by the end of 2024.

Biogen has opened a Biologics License Application (BLA) with the FDA and said it is preparing for a pre-BLA meeting this summer. After that step, the company will submit its filing. Any news on progress in the filing may lead share direction in the coming months. And the final approval decision is the major catalyst ahead for this biotech stock.