Please ensure Javascript is enabled for purposes of website accessibility
Log In Help Join The Motley Fool
Free Article Join Over 1 Million Premium Members And Get More In-Depth Stock Guidance and Research
By Lee Samaha - May 5, 2020 at 8:07AM

Taking a look at one of the most interesting investing propositions in the industrial sector.

Multi-industry industrial 3M Company (MMM 1.72%) represents one of the most interesting investment options in its sector. Following a few years of lackluster operational performance, the company lost the valuation premium that it used to command over its peers and is arguably now moving into value range. Throw in management's commitment to restructure the company, and there was a case for buying the stock in 2020. That said, the COVID-19 pandemic is going to hit the company hard in 2020, so is now a good time to be buying the stock?

Earlier in the year, the market wasn't too impressed with 3M's fourth-quarter 2019 results. The company reported a $0.20 per share restructuring charge that reduced overall earnings per share (EPS) to $1.95. While nobody likes to see restructuring charges eating into earnings, there were a two main positives to be drawn from the report.

First, if you exclude the restructuring charges 3M would have hit the high point of its first-quarter guidance range. 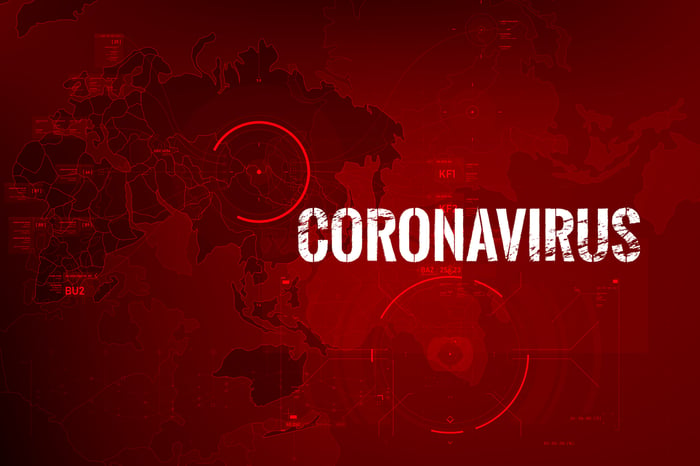 3M's sales are being affected by the COVID-19 pandemic. Image source: Getty Images.

Second, the restructuring charges were a sign that management had recognized the need to address its underperforming operations. 3M had been falling behind its medium-term growth aspirations for the last four years, particularly in its healthcare and consumer segments. Moreover, the company was developing a reputation for missing its own revenue and earnings guidance.

The restructuring efforts looked good. They included running its businesses on a global basis instead of a country basis, moving to four business segments instead of five, and a renewed focus on its more profitable activities.

These restructuring efforts and the company's valuation made it a stock worth watching. If management could show material improvements from restructuring, it would make 3M's stock a compelling industrial stock with a lucrative dividend yield of 3.7%.

Along comes the novel coronavirus

Unfortunately, the COVID-19 pandemic came along and scribbled over the playbook. Thanks to the distorting effects of the sudden shutdown in the global economy, it's now going to be hard to discern any underlying improvement in the business.

Although the worst of the effect is going to come in the second quarter, 3M was affected by weak demand in "oral care, automotive, aerospace and general industrial" in the first quarter, according to CEO Mike Roman on the company's earnings call. Moreover, the second quarter is shaping up to be a bleak one, with Roman saying:

I can share that we are seeing a slowdown in growth during the first several weeks of Q2, with total company organic growth through late April down in the mid-teens.

That said, there were some signs of improvement. For example, pricing improved 0.4% in the quarter, and this more than offset a volume decline of 0.1%. Ultimately, total organic local currency sales growth increased by 0.3% in the first quarter.

In addition, CFO Nick Gangestad said that he thought pricing would "stay in the zone" for the rest of the year, while falling raw material prices would provide a tailwind in 2020. Presumably, Gangestad means pricing would improve at a rate of around 0.4% for the full-year. This would be a positive result in the light of the volume declines that are going to hit 3M in the second quarter. 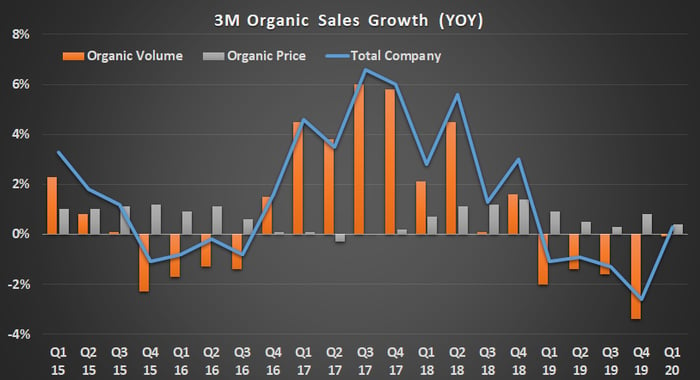 There was also some positive news on operating profit margins in the quarter, notably in the safety and industrial segment. Gangestad noted more efficient production and that "we also are seeing an impact right now of really good, disciplined spending control in that business."

The healthcare segment's margin decline was almost entirely attributable to a couple of acquisitions that had lower margins than the legacy business. Also, the transportation and electronics segment's margins got hit by declining sales.

Overall, margins held up well considering the difficult circumstances in the quarter.

All told, it's difficult to say whether 3M's operating performance is turning the corner. The upcoming quarter's result won't be much help, either. However, there are some signs of underlying improvement at 3M, and the stock should remain on investors' watch list. The COVID-19 pandemic will pass eventually, and 3M may yet emerge as a stronger company at the end of it.