Shares of Akebia Therapeutics (NASDAQ:AKBA) were skyrocketing 37.3% higher as of 11:25 a.m. EDT on Tuesday. The huge jump came after the biotech announced positive results from a late-stage clinical study for its lead pipeline candidate vadadustat and reported its first-quarter financial results.

The most important news for Akebia by far was its clinical update for vadadustat. The late-stage clinical study found the drug to be safe and effective in treating anemia due to chronic kidney disease (CKD) in adult patients on dialysis in a head-to-head comparison with darbepoetin alfa, an approved drug marketed by Amgen under the brand name Aranesp. 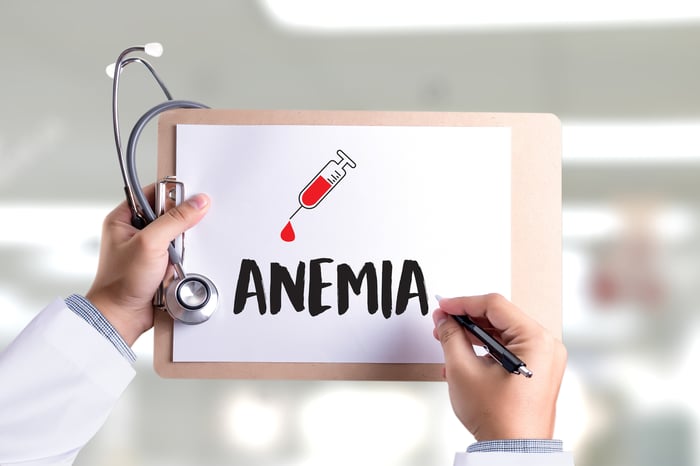 Akebia stated that vadadustat achieved both primary and key efficacy endpoints of the study, demonstrating non-inferiority to darbepoetin alfa in a mean change in hemoglobin levels. The drug also achieved the primary safety endpoint of the study, showing non-inferiority to darbepoetin alfa in time to first occurrence of major adverse cardiovascular events (MACE).

The good news for vadadustat completely overshadowed Akebia's Q1 financial update. But there was some good news on that front as well. Akebia reported total revenue of $88.5 million in the first quarter, up 22% year over year. The company also announced that its cash, cash equivalents, and available-for-sale securities totaled $115.4 million as of March 31. Akebia said that its cash position should carry it "well into 2021."

There's one other important catalyst on the way for the biotech stock. Akebia expects to report results in mid-2020 from its second late-stage study of vadadustat in treating patients not on dialysis with CKD-related anemia. The company plans to file for Food and Drug Administration approval of the drug soon afterward if all goes well.