Please ensure Javascript is enabled for purposes of website accessibility
Log In Help Join The Motley Fool
Free Article Join Over 1 Million Premium Members And Get More In-Depth Stock Guidance and Research
By Reuben Gregg Brewer – May 5, 2020 at 11:13AM

Oil majors had a good month in April, but don't read too much into the gains. There's a lot of backstory here -- and more pain ahead.

Shares of ExxonMobil Corporation (XOM 3.64%) rose 22% in April, according to data from S&P Global Market Intelligence. Peer Chevron Corp (CVX 3.38%) advanced 27%. And smaller exploration and production company Occidental Petroleum Corporation (OXY 4.92%) rose an even more impressive 43%. These one-month gains look great, but the stocks still ended April down for the year, with Chevron off by 24%, Exxon by 33%, and Occidental down by a whopping 60% over that four-month span. In other words, April was a nice bounce, but it was just a rebound for a terrible span that culminated in March, when the market fell into bear territory. The bigger picture here, however, is that the pain for oil companies isn't anywhere near over yet.

The energy industry is highly cyclical, prone to swift and dramatic price swings based on supply and demand. Over the past decades or so the normal supply dynamics in the global oil market have been shifting because of the growth of onshore U.S. oil drilling. To deal with increasing production from the United States, OPEC had been cutting production. While that limited the impact on supply, U.S. producers simply increased production to fill in any void that OPEC left. OPEC's moves ended up being more of a band-aid than a solution -- supply remained elevated, and oil prices have stayed relatively weak. 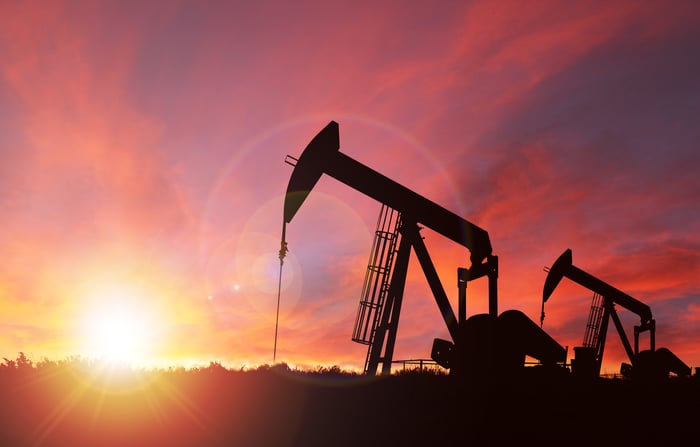 In early March, however, OPEC and Russia disagreed on further cuts. The end result was a price war that pushed supply even higher. The price of oil plummeted, and investors reacted by selling off the stocks of oil companies like Exxon, Chevron, and Occidental. It only took about a month of that pain before OPEC, Russia, and the United States got together and agreed to production cuts to help stem the bleeding. That helped to solidify investor sentiment around oil companies.

The problem is that around the time that OPEC and Russia were getting into a price war, COVID-19 was spreading around the globe. To slow the coronavirus down, economies around the world effectively shut themselves down. That led to a massive reduction in oil demand. The fear around COVID-19 and the related demand declines helped push oil prices even lower. As countries around the world started to see the spread of coronavirus slow, investors got more positive again, pushing stocks of oil companies up off their lows.

The problem here is that the supply/demand dynamics that back the larger decline are still tilted too heavily toward oversupply, and oil prices remain pretty weak. That won't change anytime soon -- all of the excess oil that wasn't needed because of the efforts to slow COVID-19 ended up in storage. There was so much oil, in fact, that companies hired Suezmax ships, which normally ferry oil around the world, to act as floating storage tanks -- a very expensive way to store oil that is only worthwhile when there's really no other choice. All of the extra oil sitting in storage, meanwhile, has to be worked off before oil prices can mount a sustained advance. 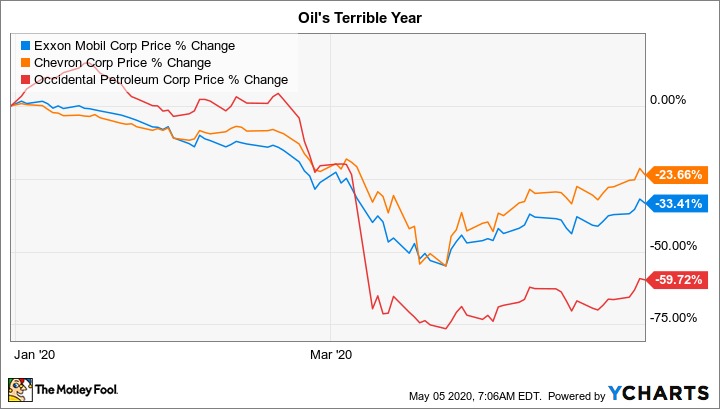 That was on clear display recently when Chevron and Exxon reported earnings. (Occidental doesn't report until May 6.) The results of both of these industry giants were generally weak, and both companies noted that there was more pain ahead. Chevron's earnings release summed the problem up well: "Financial results in future periods are expected to be depressed as long as current market conditions persist." If history is any guide, clearing out the oversupply is going to take some time.

There are "positive" things happening in the oil space, with companies pulling back on capital spending, wells getting shut down, and weaker players going bankrupt. All of this will help clear the oversupply, even if they don't sound like good news. However, it will still take time, and perhaps a lot of it, to get through this rough patch. The broad gains in the energy space in April were nice to see, but the industry is still dealing with material headwinds.

Now is the time to focus on large and financially strong oil companies. At this point, Chevron appears to be one of the best-positioned oil majors to weather the storm, with modest debt and exploration plans. Exxon should muddle through, but heavy capital spending plans have led to a sharp rise in debt, which increases risk. Occidental, meanwhile, is pulling back hard after making what in hindsight was an ill-advised and expensive acquisition.