Crude futures are down 9% as some of the world's biggest oil producers stare each other down over production cuts.

The crude oil sell-off has gone from bad to worse. Brent futures are on track to lose 9% on March 6, while West Texas crude is down 9.5% with only a couple of hours remaining in the final trading session of the week. Today's massive drop was started by news that Russia wasn't prepared to play ball with OPEC, which had proposed a 1.5 million-barrel daily cut by OPEC and its OPEC+ partners, of which Russia is most-prominent.

The proposal included 1 million barrels of daily production that OPEC member states had agreed to take, with the additional half-million daily barrels in cuts to come from Russia and the other non-OPEC members of the OPEC+ group. Russia would be expected to bear the brunt of most of those extra cuts, and so far is proving unwilling to do so. 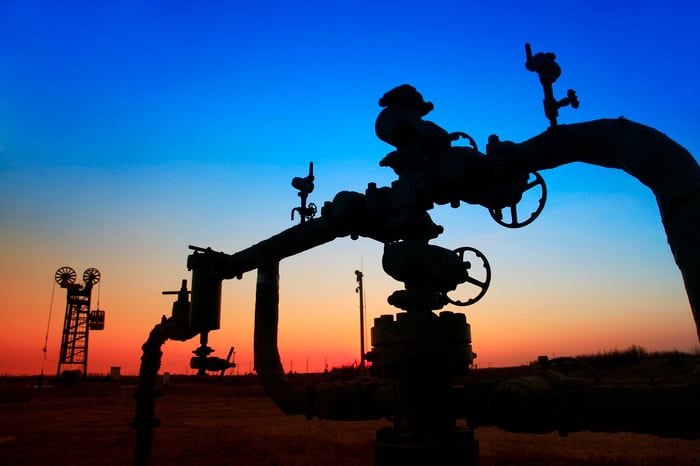 Today's massive sell-off is partly a product of timing, as traders fight to get out the door before the end of the week's trading. But there are serious structural concerns with oil markets behind the selling. Global oil consumption is already expected to fall in the first quarter due to the economic impacts of coronavirus on China, and a lack of substantial cuts in output by major producers would result in an increase in the oversupply.

Markets are reacting as expected to these fears, sending most oil stocks down sharply. At this writing, ExxonMobil (XOM 1.18%) shares are down 5% on the day and have shed nearly 25% of their value over the past month, while small oil producer Denbury Resources (DNR) stock has fallen 11% on the day and 45% since early February. The sell-off isn't limited to companies that produce oil either: Noble Corp (NEBLQ), the offshore oil and gas drilling specialist, has lost half its value over the same period, after today's 18% sell-off.

At current prices, oil is already at multi-year lows. West Texas crude is at $41.54 at this writing, the lowest since April of 2016, while Brent Crude is at $45.30, the lowest it has been since briefly falling below $45 in August 2015. What happens next will largely depend on what major state-controlled producers like Russia and the OPEC member states decide to do, but so long as the impact of coronavirus on global oil consumption remains in play, oil markets are likely to remain incredibly volatile.

Investors looking for opportunity are moving away from the uncertainty of energy markets, with dividend stocks coming more into favor, particularly with interest rates at record lows.