Please ensure Javascript is enabled for purposes of website accessibility
Log In Help Join The Motley Fool
Free Article Join Over 1 Million Premium Members And Get More In-Depth Stock Guidance and Research
By Billy Duberstein – May 6, 2020 at 6:45AM

COVID-19 may cause a slowdown, but artificial intelligence technology marches on.

One of the biggest tech opportunities over the next decade is artificial intelligence (AI). According to Grand View Research, the general AI market, across a variety of products and services, is set to expand at a huge 46.2% average annual growth rate between 2019 and 2025. AI is set to power the next generation of tech innovation, from virtual assistants, to big-data analytics and inference, to self-driving cars, to image and voice recognition, and new 5G applications.

With COVID-19 sweeping across the country and leading to shelter-in-place orders, many of these tech trends could be accelerated, as business look to quickly digitize to serve customers and cut costs. With many AI-oriented big tech companies reporting resilient financial results in their first quarter earnings reports, several look like strong buys in May as we come out of the March crash. Here three top AI companies to put on your buy list this month. 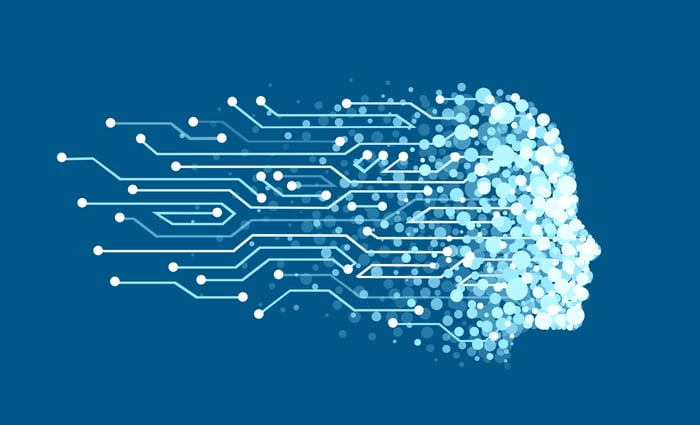 These AI stocks are strong buys in May. Image source: Getty Images.

E-commerce and cloud giant Amazon.com (AMZN -1.57%) pulled back harshly after reporting first-quarter earnings, but fear not: The tech giant was already up big for the year, and the stock still remains up 23.7% for 2020 -- a huge feat considering the market crash in March.

The optimism appears warranted. Amazon saw a huge surge in demand in March as shelter-in-place orders caused many to stay at home and use more of Amazon's services. North American e-commerce sales accelerated from 17% growth in Q1 2019 to 29% growth in Q1 2020, and international sales accelerated from 9% to 18%. Amazon Web Services decelerated from 41% a year ago to 33%, but that was somewhat predicted, as it was lapping very high growth rates that would be hard to match. Encouragingly, AWS operating margins expanded by a whopping 400 basis points just in a single quarter, showing Amazon achieved that growth without much incremental investment.

Amazon not only uses artificial intelligence in its own operations, such as its product recommendation engines and Alexa home speaker assistants, but AWS also enables the use of artificial intelligence for cloud customers, providing a comprehensive suite of AI plug-and-play services. Additionally, AWS Sagemaker allows data scientists within companies to construct machine learning algorithms or use standard pre-built models, all while cutting out a lot of the extra busy work at each step of the process. As more and more companies use AI going forward, AWS is bound to see a heavy uptake of its storage and compute capabilities at the very least, and likely adoption of its own in-house AI tools too.

While Amazon's stock pulled back on news that it would step up spending to hire and protect workers next quarter to the tune of about $4 billion, these investments should pay off in the long run, removing supply bottlenecks and better serving customers during this difficult time. That should pay off for Amazon's brand and long-term investors, making Amazon a great pickup after its post-earnings pullback.

Another large AI company impressing its first-quarter results was Alphabet (GOOG -1.98%) (GOOGL -1.82%), the parent company of Google. The stock had been hit hard during the first quarter, as Alphabet's ad business will no doubt take a hit during this recession. However, its late March ad declines weren't as bad as feared, sending the stock up strongly after the first quarter release.

In addition, Alphabet saw strong growth in its own Google cloud segment, up 52% year over year, with the underlying Google Cloud Platform infrastructure-as-a-service growing even faster than that. The Google Play app store showed strong growth is well, as did YouTube premium subscriptions.

Google not only uses AI in its main search algorithms and cloud platform, but it's also becoming more of an AI player both on the software side and hardware side. Google began developing its own AI accelerator called the Tensor processing unit in 2016, which it not only uses in its own data centers but also sells to third parties.

Meanwhile, another AI project at Alphabet, its Waymo self-driving-car unit, received a $2.25 billion investment from outside investors in the first quarter at a $30 billion valuation, an apparent validation of Alphabet's technology, as well as management's newfound cost discipline with regards to Alphabet's moonshot "other bets" segment.

That shareholder-friendly turn also manifested itself in increased buybacks as the stock price fell in the first quarter -- yet another promising sign that Alphabet might finally dip into its huge cash pile and repurchase more of its undervalued stock on a perpetual basis.

With Alphabet still well below its February highs, today's price still looks attractive for the long-term investor, even after the post-earnings bump.

Finally, one AI semiconductor stock to watch in May is Advanced Micro Devices (AMD -1.22%). AMD is unique in that it's the only chipmaker that currently makes both central processing units (CPUs) and graphics processing units (GPUs). Both processors are used in intense computing applications, including AI and machine learning. Currently, it's the No. 2 producer of both, behind leading pure plays Intel (INTC -2.31%) and NVIDIA (NVDA -0.66%).

However, AMD seems poised to gain share, especially in CPUs, as it managed to leapfrog Intel in producing leading-edge 7nm chips in late 2018. In fact, AMD has taken market share in laptops for the last 10 straight quarters and is poised to continue that trend this year. Meanwhile, its second-generation 7nm EPYC data center processors have landed a laundry list of top tech names, including some of those mentioned above. AMD also won a contract to supply the Lawrence Livermore National Laboratories supercomputer with not only its EPYC CPUs but also its Radeon GPUs. AMD now exclusively powers two of the three large U.S. super-computing systems that have been publicly announced, further boosting AMD's street cred and putting its brand on par -- or exceeding -- that of the other leaders.

And if that weren't enough, AMD's semi-custom chip segment will also benefit from the new PlayStation and Xbox game consoles set to be released during the holiday season this year.

Like Amazon, AMD actually pulled back slightly after its recent earnings call after a big run-up, as it lowered the low end of its annual guidance to 20% growth, down from 28%, due to uncertainties around laptop demand in the second half of 2020. However, management still maintained the high end of guidance, at 30% growth, which was somewhat encouraging.

At any rate, these growth rates are nothing to sneeze at during an economic downturn, and shows AMD's strength and positioning amid some of the most compelling tech trends today, including data center, laptops, gaming, and high-performance computing.